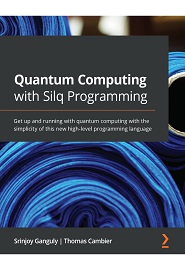 Quantum computing is a growing field, with many research projects focusing on programming quantum computers in the most efficient way possible. One of the biggest challenges faced with existing languages is that they work on low-level circuit model details and are not able to represent quantum programs accurately. Developed by researchers at ETH Zurich after analyzing languages including Q# and Qiskit, Silq is a high-level programming language that can be viewed as the C++ of quantum computers! Quantum Computing with Silq Programming helps you explore Silq and its intuitive and simple syntax to enable you to describe complex tasks with less code.

This book will help you get to grips with the constructs of the Silq and show you how to write quantum programs with it. You’ll learn how to use Silq to program quantum algorithms to solve existing and complex tasks. Using quantum algorithms, you’ll also gain practical experience in useful applications such as quantum error correction, cryptography, and quantum machine learning. Finally, you’ll discover how to optimize the programming of quantum computers with the simple Silq.

By the end of this Silq book, you’ll have mastered the features of Silq and be able to build efficient quantum applications independently.

LaptrinhX
—
Quantum Computing with Silq Programming: Get up and running with the new high-level programming language for quantum computing
Share this