The Trump administration is in the midst of redesigning U.S. foreign assistance to improve its effectiveness and efficiency—a commendable exercise that has garnered interest not just within the administration but also in Congress and civil society. Below, we’ve outlined where help is most needed and how to better connect the State Department and the U.S. Agency for International Development, which clearly need to align well.

A logical place to start is where there are acknowledged inefficiencies, logjams, and unproductive duplication of work. Three State Department functions immediately come to mind:

Coordination of aid policies and programs is an important function, but these entities have engaged in a gradual shift in objectives, are outdated, and need to be refocused and right sized to meet current demands.

The Department of State and USAID are sister organizations that must work together to achieve U.S. foreign policy objectives. This can be difficult at times, since they have different cultures, expertise, and functions that require different operating procedures. But they do need to operate in sync, or at least in close concert. Coordination of budgets is critical, and the secretary of state needs centralized advice on the broad sweep of U.S. foreign assistance policies and programs.

USAID was established by law as an independent agency, and its administrator must regain control over its budget and have the capability of arguing its resource priorities directly to the secretary of state and to the Office of Management and Budget (OMB). This does not require the abolishment of the F bureau but would necessitate a major reconfiguration of the office, options for which are presented below.

F was created with the purpose of coordinating assistance across the government among the more than 20 agencies that manage foreign aid programs. It also was to gather in one place data on all foreign assistance to keep the secretary of state, the National Security Council (NSC), OMB, Congress, and other stakeholders well informed.

F has never carried out this first task of government-wide aid coordination. It has succeeded in exercising authority only over State Department and USAID foreign aid programs, initially, in the latter’s case, at the expense of abolishing the agency’s budget and policy offices. While both capacities were restored in 2010, F has continued to interfere, and even dominate, USAID’s budget formulation, allocation, and execution, engaging in unnecessary second-guessing and action delay. F initially had focused its approval of funds on ensuring alignment with policy toward a country and congressional earmarks. In more recently, it has inserted itself into program level approval, and with only a thin layer of necessary expertise to make these decisions. What is the value added in this?

Further, after budgets have been set, F now must approve shifts in resource allocations between countries (known as reprogramming). And when USAID finds under-performing projects and seeks to move funds from country to country for worthier activities, F, at times, will deny the transfer in order to hold the funds for some future need—not sound financial or program management!

Even more egregious is the reporting relationship between State and USAID. There is no question that U.S. development and humanitarian programs must be consistent with U.S. foreign policy and national security objectives, and that the administrator of USAID must work closely with the State Department. When F was originally conceived, the USAID administrator was dual hatted as the director of F and reported directly to the secretary of state. Today, the USAID administrator does not wear the F hat, and the position has been downgraded several rungs. In the current configuration, the Senate-confirmed administrator submits the USAID budget to a senior level civil servant at State or, at best, the deputy secretary—leaving the administrator with only one opportunity annually to defend the agency’s budget to the secretary. Otherwise, most budget decisions are made by F or by the deputy secretary, to which the administrator does not officially report. Former USAID Administrator Peter McPherson makes the point that, during his tenure in the Reagan administration, the arrangement of him reporting directly to the secretary of state worked better for the state department than the current system with F.

On the plus side, F has made notable (but uneven) progress on the second goal of collecting data on aid across the government. Nevertheless, there now exists duplication with USAID data platforms that the agency has used for over 50 years, as required by law, to gather aid data from all government agencies. While these two systems have somewhat distinct purposes, they create “dueling” foreign assistance dashboards that present inconsistent data and confuse users. These databases need to be consolidated onto a single platform.

The assistance coordinators for Europe and Eurasia and Central and Eastern Europe (now joined together as EUR/ACE) were legislated by Congress because the George H.W. Bush administration proposed that multiple agencies, not just USAID, should implement assistance to these two regions. At the time the two coordinators were created, the U.S. was setting out on an entirely new venture: supporting the transition of former communist countries to democracy and free enterprise, a task without precedence or established policy. It made sense then for Congress to create a high profile office that could engage at the highest level and across agencies as the White House set a new course and new policies. But that time is over. Policy is now routine, and assistance levels for the two regions have fallen from roughly $2.5 billion in fiscal year 1994 to $900 million in 2017.

Furthermore, like F, while legislation establishing the coordinators use the terms “overseeing and coordinating”—not “managing”—programs, the regional coordinators have at times overreached, being more directive than is necessary to ensure that programs are effectively working together and consistent with policy.

The Trump administration’s State and USAID redesign process is an opportunity to correct these problems.

First, the administration can act on the never-implemented declaration in the 2010 Quadrennial Diplomacy and Development Review that “USAID will be given the primary role in executing the budget for development programs it manages.” A clear line of authority and accountability is a fundamental principle of good management. The administrator and USAID need to be given full authority over the formulation, allocation, and execution of the USAID budget. Do that and all stakeholders—State, NSC, OMB, Congress, and the American people—will know whom to hold accountable.

Second, the justification and the expenditure of funds and staffing clearly cannot rest on the F Bureau. It was built to coordinate assistance across government agencies. The State Department does indeed need a central foreign aid budget function. To get there, State needs to first sort through its own requirements for managing its multiple assistance programs and then find a way to reconcile the disconnect and duplication between the two regional coordinators and F. Where should oversight among State foreign aid activities be located, at the central level or at the regional level? One option is moving F into the Bureau of Budget and Planning, where foreign assistance can be better coordinated with the more than $17 billion the State Department maintains for its diplomatic and security operations.

Third, there is now sufficient experience to review how and where to house a central aid data depository. An objective assessment should sort out the dueling dashboards. While neither of the two platforms is perfect, to date, given the omissions and gaps that persist in the F-managed FA.gov system. USAID seems to be performing that function more efficiently and effectively.

The remaining problem is how to achieve government-wide aid coordination. To make this function easier, a starting point is to eliminate some of the need for coordination by consolidating functions in the appropriate agencies, as recommended in the recent Aid Redesign Consensus and the related six reports on aid reorganization.

None of the known solutions are ideal. The National Security Council would seem appropriate, but assistance coordination among U.S. government agencies is a regular function, and the NSC is not good at regular functions—it gets distracted by the latest crisis. The State Department is another candidate, but its track record is one of mission creep into micro-management of assistance, for which it lacks the expertise, the systems, and the discipline and prioritizes short-term foreign policy imperatives over longer-term development and economic goals. USAID would be another candidate, but it can serve this function only if its prominence and clout is elevated as called for in those recent reports.

There are two other options, based on shared responsibility by State and USAID. One is to adapt to current needs an earlier version of an interagency committee on development and foreign assistance, with the USAID administrator in the chair for development and humanitarian issues and the deputy secretary of state in the chair for security assistance. Neither form of assistance is without interest to the other agency: State has an interest in how much development assistance goes to a country, and USAID is the primary implementer of Economic Support Funds and portions of counter-narcotics efforts. Whoever is in the chair will need to work closely with the other.

A second option is for these two senior office holders to share these respective responsibilities in a reconfigured F. Where they fail to resolve coordination differences, the secretary of state would make the final determination with each perspective being heard.

Whatever the outcome, let’s hope the administration’s redesign process brings some order to State’s and USAID’s management of their respective assistance budgets and programs. 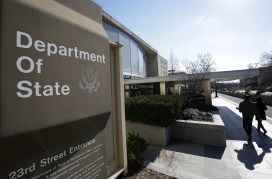