Welp! No One Is Talking about This is the absolute strangest book I have read in a while! But like, in that way where you’re thinking, “yep, this is who Patricia Lockwood is as a writer. Yep. This checks out.” Her entire career up to this point has followed a trajectory that must always have led to this: a book that is half about the asinine minutiae of the internet, and half about the grief of losing a desperately beloved baby niece, who was born with a rare disability that killed her after six months. 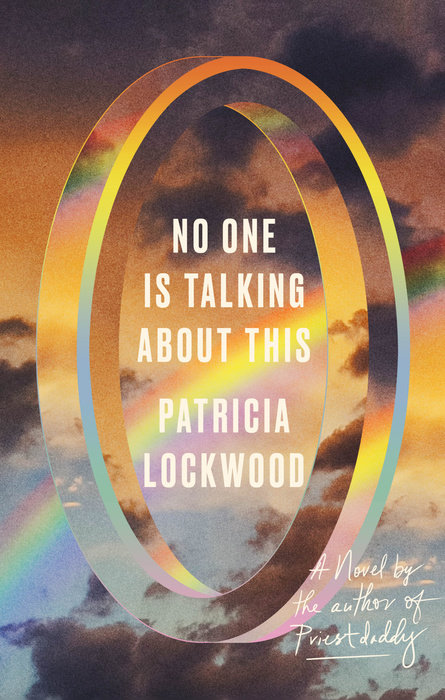 A WARNING: If you are a person with a current baby niece, perhaps postpone reading No One Is Talking about This until your baby niece is a bit older. This goes double if said baby niece reminds you keenly of two disabled family members who have died. I lost my aunt at the start of 2020 — that awful year! that stupid very year! fuck that fucking year! — and it was hard to do the holidays without her. I was fully warned about the plot of No One Is Talking about This, yet I plowed ahead and read it until I cried.

If it seems like I’ve been a bit vague about describing this book, that is because it is quite difficult to describe. Though it’s marketed as fiction, it doesn’t feel like a novel. Not only is it clearly heavily drawn from Patricia Lockwood’s own life (fictionalized) but it comes at you in these tiny vignettes that feel more like prose poems than a traditional novel. The writing of the book will reminds you keenly of the internet — the “portal,” as Lockwood calls it here — in its bite-sizedness, its surreality, and the uncomfortable sense that the words you are reading are reading you back.

In contrast with her generation, which had spent most of its time online learning to code so that it could add crude butterfly animations to the backgrounds of its weblogs, the generation immediately following had spent most of its time online making incredibly bigoted jokes in order to laugh at the idiots who were stupid enough to think they meant it. Except after a while they did mean it, and then somehow at the end of it they were Nazis. Was this always how it happened?

To future historians, nothing will explain our behavior, except, and hear me out, a mass outbreak of ergotism caused by contaminated rye stores?

Will any of this be remotely comprehensible in a few years? Are we confident it’s comprehensible now? If you are the same amount online as Patricia Lockwood (a thought which this book comes at me for thinking! very unfair!), a lot of it makes sense but in a deeply surreal way like maybe it was necessary to first go insane in order to make sense of it. In that way it is a very accurate chronicle of the state of the internet in these present times. I say that as someone who genuinely loves Twitter and would feel truly bereft if I could no longer go on Twitter.

That said, part of the point of the book is the keen and unbearable reality of loss. The internetty bits are, in a way, glib by design, as a contrast to the parts of the book that are talking about loss and real life. However, Lockwood’s glibness about internet group-think can at times feel that it carries the assumption that all of these internet conversations have the same stakes for everyone, and those stakes are the ones that Lockwood experiences, and the stakes are all nonsense. I don’t, to be clear, think that Patricia Lockwood thinks this (I don’t know what she thinks!). I just sometimes got very tense about the possibility that she was going to be like “and this is why cancel culture is a major danger in our society” and just veer all the way into scoldy Gen-X internet didacticism. Sometimes the internet is deeply stupid, for sure. But I have also learned a lot of valuable stuff from random people on Twitter.

The back half of the book is not about the internet. It’s about Fictional!Patricia Lockwood’s sister’s daughter, who — they find out during the pregnancy — has Proteus syndrome. This makes the pregnancy very risky for baby and mother, and also makes it unlikely that the baby will live for long if she is born alive. Indeed, she lives for almost exactly six months. These portions of the book shine with sincerity. I cried. The narrator’s grief and rage are so acute, and it meant the world to see a depiction of two thoughts about the same pregnancy that don’t and can’t cancel each other out:

I cried. Tears down my face. This despite being an emotionless automaton!

Some bits I liked:

Sperm it up my hole, she tried once, as a variation, but was roundly condemned by purists. It was so tiring to have to catch each new virus, produce the perfect sneaze of it, and then mutate it into something new.

(A few pages before this she mentions the plum meme. THE INTERNET IS SO WEIRD.)

The question that was the pure liquid element of the portal — who am I failing to protect? — had found its stopped-clock answer. She fell heavily out of the broad warm us, out of the story that had seemed, up till the very last minute, to require her perpetual co-writing. Oh, she thought hazily, falling rainwise like Alice, finding tucked under her arm the bag of peas she once photoshopped into pictures of historical atrocities, oh, have I been wasting my time?

“Surely there must be exceptions,” her father ventured, the man who had spent his entire existence campaigning against the exception. His white-hairy hand traveled to his belt, the way it always did when he was afraid. He did not want to live in the world he had made, but when it came right down to it, did any of us?

Note: I received an ARC of this book from the publisher, for review consideration. This has not impacted the contents of my review.

The post Review: No One Is Talking about This, Patricia Lockwood appeared first on Reading the End.

LaptrinhX
—
Review: No One Is Talking about This, Patricia Lockwood
Share this