Aaaaaaaaand romance continues to get all its romance kissing cooties all over the genre of science fiction. Glorious! Long may it reign! Winter’s Orbit is about the rakish prince Kiem, who gets tapped to be part of an arranged marriage with his cousin’s widower, Jainan. Though neither of the two men is particularly interested in getting married, the alliances among their world’s nations depends on their engagement. But soon it comes to light that Jainan’s late husband, Taam, may not have died accidentally; and worse than that, Jainan may be a suspect in Taam’s death. 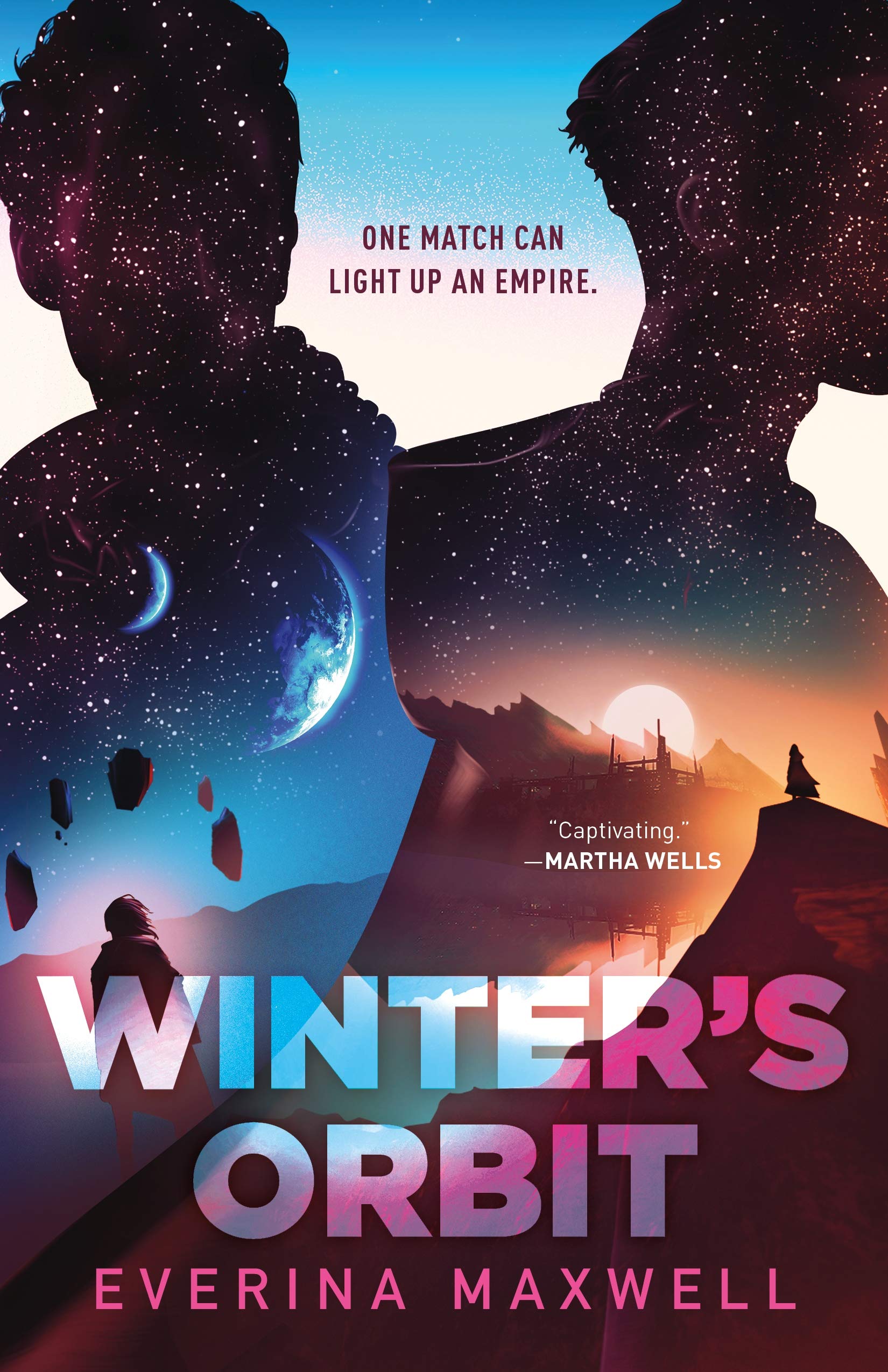 Let’s start with the romance! It’s a romance! Kiem and Jainan are a type of pairing I particularly enjoy: Kiem is all sunshine and impulse, great at going among the people and doing a very effective schmooze, while Jainan is all duty and protocal, with a keen eye for detail and a determination to do the right thing at all costs. It was fun watching the two of them learn to work with each other, and I kept thinking how satisfying they would be as secondary characters in a companion novel, where you could really see them playing off of each other and being competent as hell as a unit of two. It was particularly fun when Kiem and Jainan had the opportunity to step outside of these roles. About halfway through the book, Jainan has an idea for a mischief, and I was just delighted by it. Which I think shows the author’s success in creating these characters: I had such a clear sense of who they each were, so that when they did something unexpected, it was a special treat, without feeling out of character.

Also: The characters have hobbies!! Can the value of character hobbies possibly be overstated? Kiem loves sports! Jainan loves engineering! It’s the type of detail that makes the world and the characters feel real and lived-in, and Maxwell does a terrific job incorporating those small character beats into the plot.

The SF framework of this book is that the Iskat empire (where Kiem’s from) is trying to renew its agreements with a vast and terrifying entity called The Resolution; to get this agreement renewed, all the empire’s treaties must be approved (this is where Kiem and Jainan’s marriage comes in), and all the alien remnants must be collected up and returned to The Resolution. Fine and dandy, right? Well, I say in great seriousness, and I mean it as a compliment, the plot and worldbuilding were the cool and stylish skeleton on which to hang every trope in the book. YOU CAN FIT SO MANY TROPES IN THIS BABY. Winter’s Orbit began its life as an original story on AO3, entitled “The Course of Honour,” and it shows an absolutely warm-hearted and affectionate engagement with the world of fanfic tropes. I intended to list the tropes, but I honestly lost track! There’s arranged marriage (obv); there’s only one bed; there’s getting stranded in the snow and having to huddle together for warmth; there’s a telepathic connection situation where one of them experiences the other person’s memories… Truly, there are so many tropes.

The world of Winter’s Orbit is also casually queer in a way that felt absolutely refreshing. Kiem and Jainan’s marriage cements an alliance, and there’s no question or bother about the fact that it’s a marriage between two men. Beyond that, the Iskat empire and its affiliated countries are aware of a wide range of genders and sexualities. With a limited amount of physical description for any of the characters, Maxwell divorces gender from specific body parts, which I loved. The characters signal gender in a range of opt-in ways, mainly personal decorations, but these differ in different locales. It was wonderfully unfussy.

The next paragraph contains spoilers! Spoilers, plus my personal opinion that the book would have benefited by not making them spoilers at all!

The big misunderstanding of this romance is that Kiem and Jainan both think the other one doesn’t care for them. In this case, it’s because Jainan’s late husband, Taam, was emotionally and physically abusive, and Jainan is still recovering from the trauma of his married years. The way he reacts to Kiem is heavily inflected by that background, while Kiem, for his part, sees Jainan acting distant and takes it to mean that Jainan doesn’t like him. Although the reader is able to cotton to this secret pretty early on, it’s framed in the book as a spoiler: Kiem doesn’t know it, and Jainan never explicitly thinks about it, until a reveal about two-thirds of the way through when Kiem comes across a video of Taam shoving Jainan around.

I’m not personally wild about framing identity or trauma as a spoiler overall, but in the case of Winter’s Orbit I also don’t think it serves the story. Because the spoiler framing requires Jainan to spend most of the book not thinking about and not consciously processing what happened to him, his emotional journey lacks specificity. I can think of a number of ways that Jainan might have worked through his abuse and its aftermath, but the book doesn’t make any of those things explicit, so the climactic moments in his emotional journey felt undercooked. Plus! Moments that should have been important milestones for Jainan — such as when Kiem gets the block taken off his account, or when Jainan’s able to talk to his sister for the first time in two years — take place outside of Jainan’s perspective. It felt like a missed opportunity, both in terms of what it meant for Jainan and in terms of what it meant for his relationship to Kiem.

Note: I received a copy of Winter’s Orbit from the publisher for review consideration. This has not impacted the contents of my review.