Spend five minutes talking to a dedicated Porsche superfan, and the notion that the 993 was the “last” true Porsche 911 before the wasserkopf took over with the 996 in 1999. While this might error a bit on the subjective side, it’s not hard to see the differences in ethos when comparing the 996 family with the 993.

Line up the air-cooled 993 against its progeny, and its clear the 993 spawned significantly more hardcore, driver-focused variants. The newest of these is rapidly approaching the two-decade mark, but thankfully, if you’ve got a bundle of cash, RM Sotheby’s has a grab-bag of the 993’s greatest hits up for grabs at its upcoming 2017 Monterey sale.

Of all the 993s, or even 911s from the 90s, the 993 GT2 sits triumphant at the top of the heap. The first GT2 was built in 1993 to comply with FIA homologation  requirements, resulting in 57 roadworthy GT2s escaping onto unsuspecting streets.

With no driver’s aids, a tail-happy rear-engine configuration, and noticeable turbo lag, the 993 GT2 is a mighty car. Power comes from a 3.6-liter twin-turbocharged flat-six, spitting out 424 hp and 432 lb-ft of torque in the spec presented here.

This white example was ordered new with upgraded battery, tinted windshield, airbags, air conditioning, and power windows. Later, a radio and Clubsport steering wheel were added. In the 22 years since it first left the assembly line, it’s covered roughly 6,800 miles. 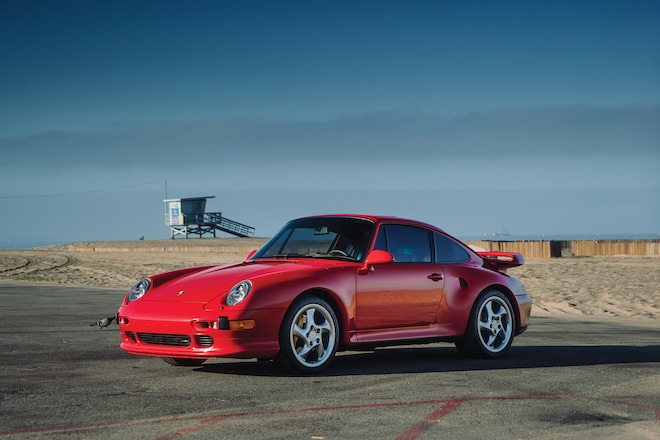 We get it – your idea of fun more closely resembles a night at the Monaco casino rather than a face-first, drug-fueled bender in Reno. For you highfalutin’ folk too good for rear-wheel-drive, RM Sotheby’s got a ’97 Turbo S.

We jest, of course. There’s a good reason that 993 Turbo S’ often change hands for more than a half-million dollars at public auction. Many consider the Turbo S to be the ultimate embodiment of the 911 Turbo, and was immediately labeled a classic the minute it hit dealership floors.

To earn that tiny “S” script on the rear decklid, the regular 3.6-liter twin-turbocharged engine was upgraded with new K-24 turbos, a new Motronic ECU, revised exhaust system, and an additional oil cooler. Thanks to these changes, the new Turbo S put out a very impressive 444 hp (424 for the U.S.) compared to the regular 402 hp Turbo.

Regarding this bright red example, there shouldn’t be any undue surprises, considering the car has traveled just 8,300 miles since new. 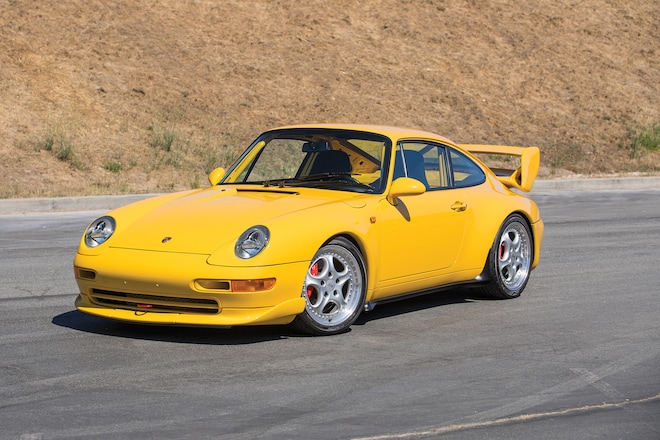 Forget forced induction – this searing yellow Carrera RS is the purists’ pick of the 993 family. The RS was essentially the 993’s version of the modern GT3, in that it focused on shedding weight and adding go-fast hardware derived from Porsche’s many motorsports endeavors.

Compared to the regular 993 Carrera, the RS dropped the curb weight thanks to the removal of the rear seats, headlight washer deletion, thinner door cards, and less sound deadening. Power was amped up as well, with total output from the revvy 3.8-liter climbing to right around 300 hp.

This is an even rarer RS Clubsport variant, a package that included fixed roll cage, carpet delete, manual windows, no A/C, and radio delete.

These were never officially sold Stateside, so this is a rare opportunity to get one of the best 993s without having to ship it in from outside the country. 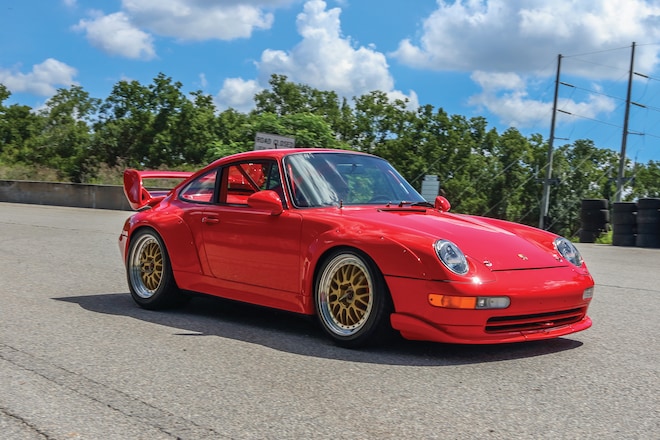 For when you want to show up the other members of the Monticello Motor Club in their fancy-shmancy 991 GT3s, bid on this rare Guards Red 993 3.8 RSR. This was the full-bore turnkey 911 racer variant of the 993, ready to bash fenders with Ferrari and BMW on international circuits straight from the factory floor.

Power comes from a heavily modified 3.8-liter flat-six found in the Carrera RS, albeit with 350 hp on tap compared to the 300 in the street variant. Inside, you can forget about cosseting seats and leather headliner – a full FIA-spec race cage and harness system means you’ll be safe, not comfortable.

It’s not street legal, but you’re sure to cause a stir at the next PCA track day.

The post Sample the Best of the 993 Porsche 911 at RM Sotheby’s 2017 Monterey Sale appeared first on Automobile Magazine.