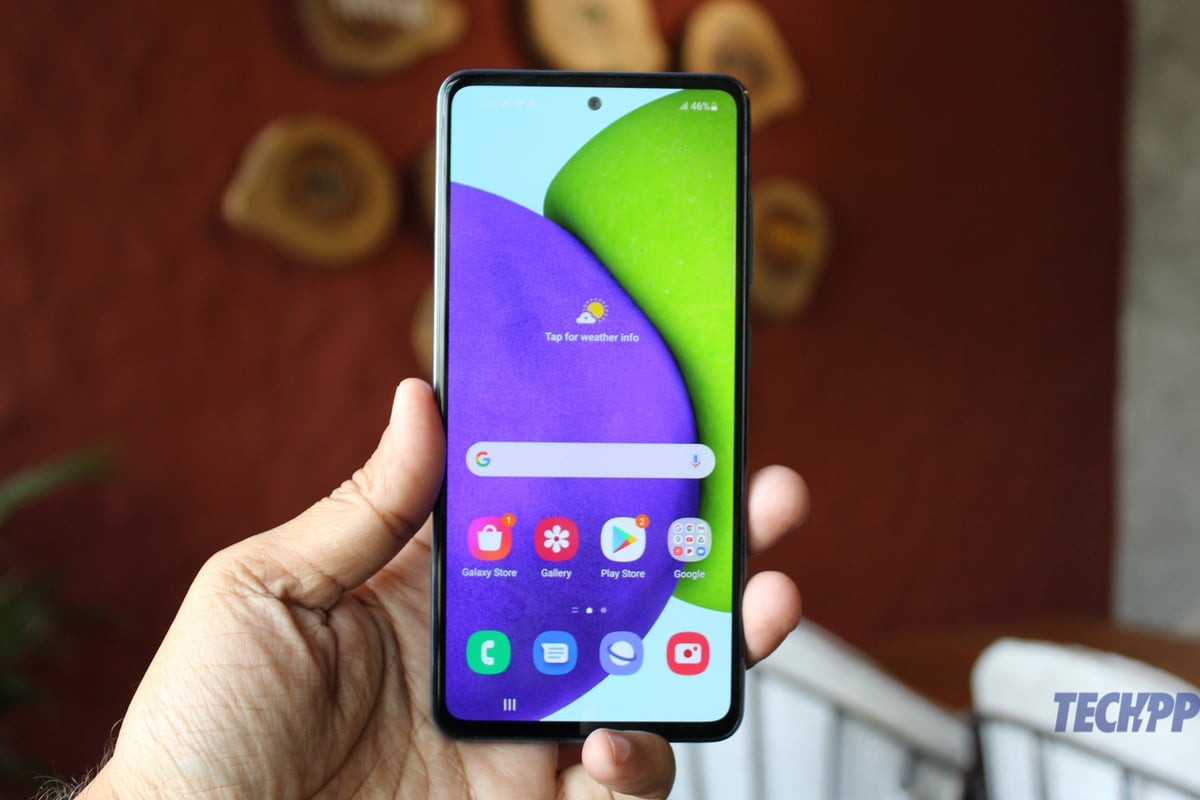 Sitting in the middle of the affordable Galaxy M series and the pricey Galaxy S series is the Samsung Galaxy A Series that of late has not been getting the sort of attention it deserves. The affordable Galaxy M series often gets hyped because of the competitive price tags while the Galaxy S range attracts premium consumers with its high-end design, specs, and features. The A series on the other hand is all things middling. In fact, we would call the Galaxy A series phones classic mid-rangers. They generally bring a decent price and specs combination to the table that might not be mind-blowing or astonishing but offer features and functions that fulfill your daily needs and requirements. 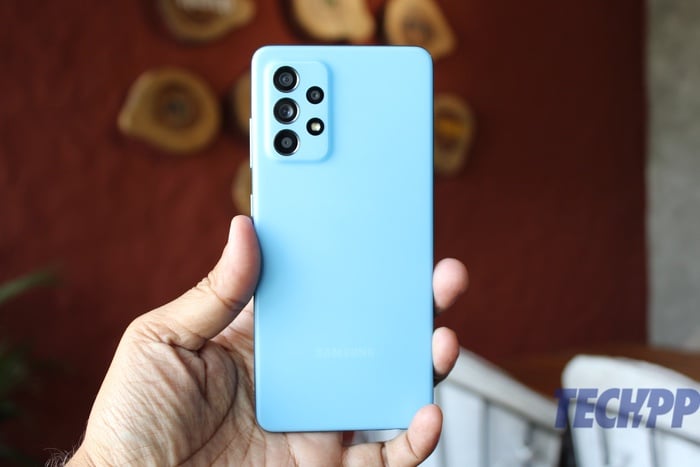 That might sound unexciting and simple but the A-series proved last year that a mid-ranger can get big numbers – the Samsung’s Galaxy A51 was one of the highest-selling smartphones globally in 2020. And now we have the successor to that bestseller, the Samsung Galaxy A52. Yes, it has big – wait, make that “huge” – shoes to fill. Just how well does it do that?

Not your “smartphone next door”

In the smartphone world, there are only a handful of brands that step away from the “follow the trend” bandwagon when it comes to design. With the Galaxy A52, Samsung has not only stepped away but has literally moved to another design platform and taken a train moving in a completely opposite direction.

The Galaxy A52 does not look anything like your “smartphone next door.” It is not shiny, shimmery, glossy, glassy, reflective, glamorous or any of those words that we generally associate with a smartphone’s looks these days, and in all honesty, that works for the A52.

The smartphone comes with an unapologetic, unashamed matte polycarbonate back which is really refreshing to see. We got the Awesome Blue color and the light, pastel blue color of the phone is actually what adds to the overall appeal of the phone. The texture and color of the back make the Galaxy A52 a youngster amongst a sea of middle-aged-looking smartphones. There is an element of bling on the phone, thanks to the shiny metallic finished frame which strikes a balance between all the matte on the back and the glass on the front. We also liked how the rectangular camera unit on the back of the phone is raised slightly without bulging out too aggressively, it almost blends into the back itself. 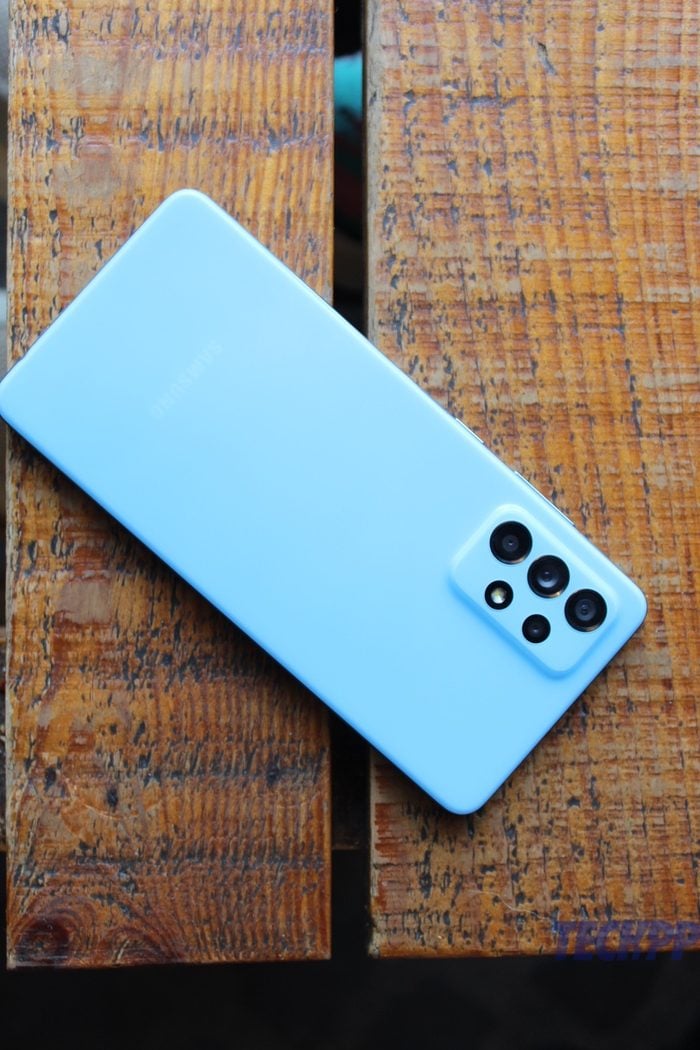 The front has a tall, beautiful AMOLED display in the best Samsung tradition surrounded by thin bezels and a punch hole notch that houses the front camera. Thanks to the polycarbonate back, the phone feels and seems solid. It also does not attract smudges and scratches like most smartphones with glossy backs generally do, eliminating the need to carry a wipe cloth with you to clean your phone with every time you touch it or even place a cover on it. Speaking of covers, the Galaxy A52 is one of the few devices in this price segment to come with IP67 dust and water resistance, so it can actually survive not just splashes but even a dunk in the water. You can read more on the looks and design of the Galaxy A52 in our First Cut. 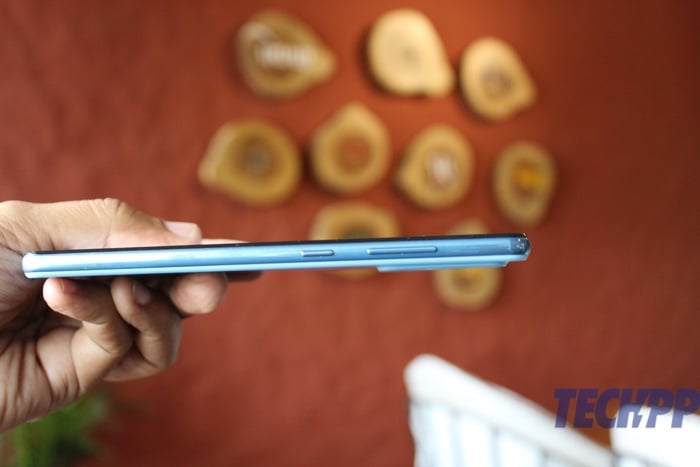 The Samsung Galaxy A52 is a mid-segment smartphone and its performance will not tell you a different story. It is powered by the Qualcomm Snapdragon 720G processor which is hailed as a good mid-range processor, albeit a little on the old side (we saw it on the Redmi Note 9 series more than a year ago). It is paired with 8GB RAM and 256 GB storage. The phone also comes in a 6 GB RAM variant with 128 GB internal storage. The storage on the device can be expanded up to 1 TB by using a MicroSD card, but the phone does not come with a dedicated slot for it which means you would have to give up on a network to make space for it, as is the case with hybrid SIM slots.

We have seen the Snapdragon 720G in action in the past. It is not exceptional but has got most of the jobs done without much hassle. That is exactly how it behaves on the Samsung Galaxy A52. The smartphone will get you through your daily chores smoothly. App-hopping will not require you to close your apps running in the background. You can simply just jump from one app to another and the smartphone will take all those leaps with you, without any hesitation. 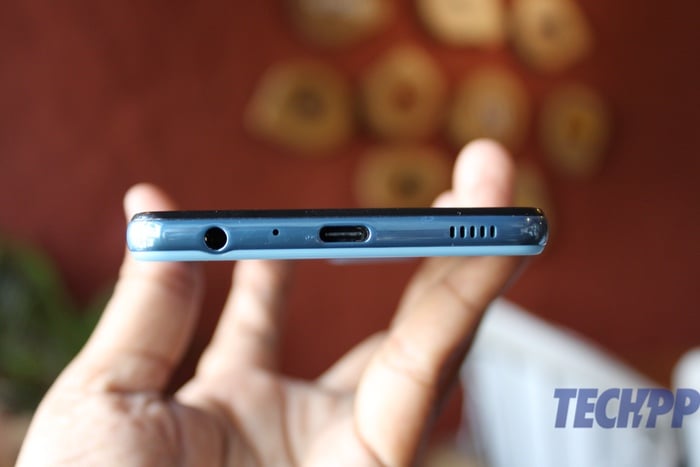 The same is the case with casual games. The Spearman, Hang Line, and Alto’s Odyssey were some of the casual games that we tried on the device and they were a delight. This changes a little when you enter the high-end game territory. The phone can run the likes of Call of Duty and Asphalt 9: Legends and that too without any major lags or abrupt crashes but you will definitely feel as if the phone is not as swift or snappy as it should be while handling them.

If there is one thing all Samsung smartphones have in common it is that almost all of them come with tall, beautiful, and rich color displays. And so does the A52. It brings a 6.5-inch Super AMOLED, Infinity-O, full HD+ display that is all things Samsung displays are made of, offering deep contrast and vivid colors. 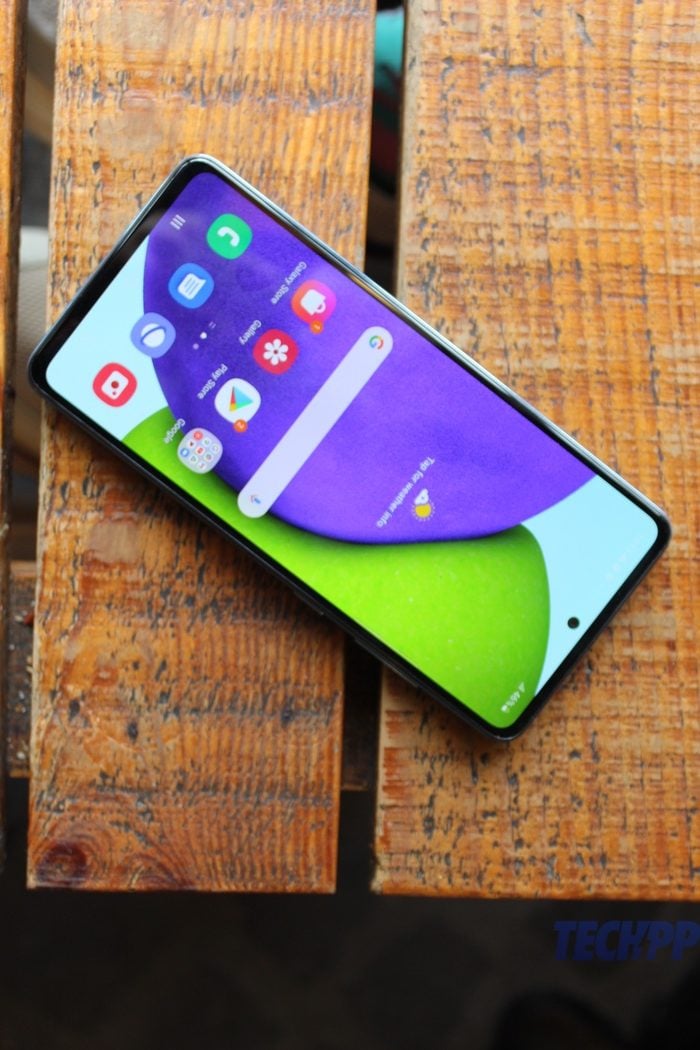 Stereo speakers and Dolby Atmos sound support add another dimension to the viewing and gaming experience on the Galaxy A52. The phone also comes with a 3.5 mm audio jack which means good old wired headphones can live to see another day. A great display and stereo speakers make the A52 the perfect device for all your binge-watch and gaming sessions. The phone also comes with Galaxy SmartTags which are basically tags you can attach to items and locate them using your phone if you lose or misplace them much like Apple’s AirTag (Yes, the feature HAS existed for years now and is not new).

Cameras that score on details, go crazy on colors 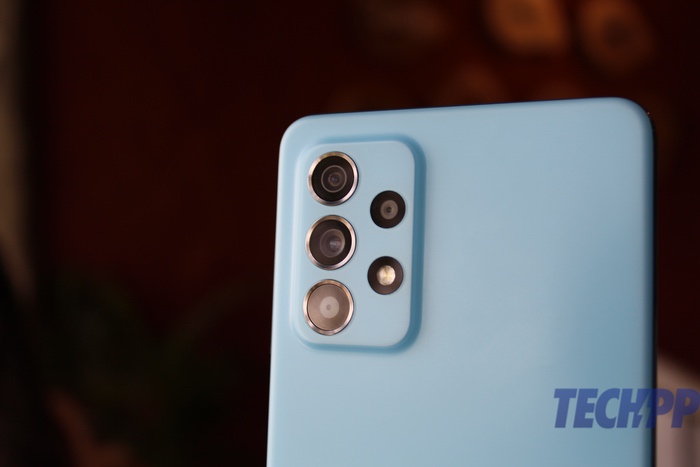 With all those numbers up its sleeve, the Galaxy A52 does really well in the detail department. The main sensor shines in particular, and its speed is impressive too – you simply tap and the smartphone will instantly focus on your subject. The ultrawide sensor of the phone does a good job too. It captures a lot of detail even when your landscape shot is crowded. The quality is not as great as that of the results captured by the main sensor (hey, those lower megapixels!) but it delivers good photographs. The macro sensor takes a little getting used to, especially while you are trying to single out a subject from a bunch (often the case with flowers) but if you get it right, the sensor can get you some stunning close-up shots. 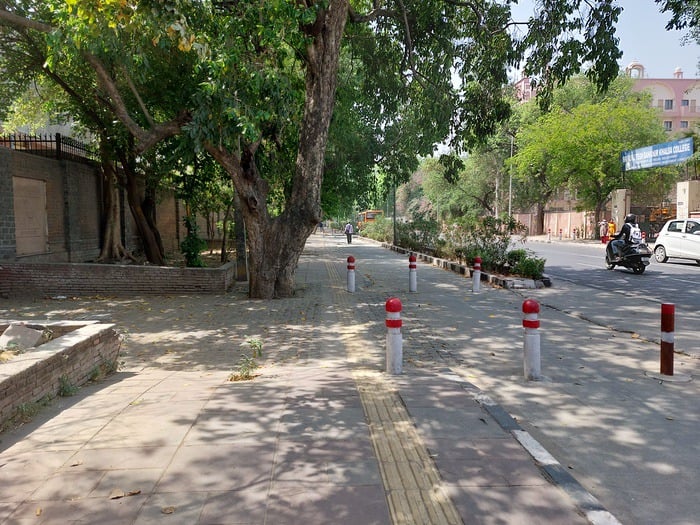 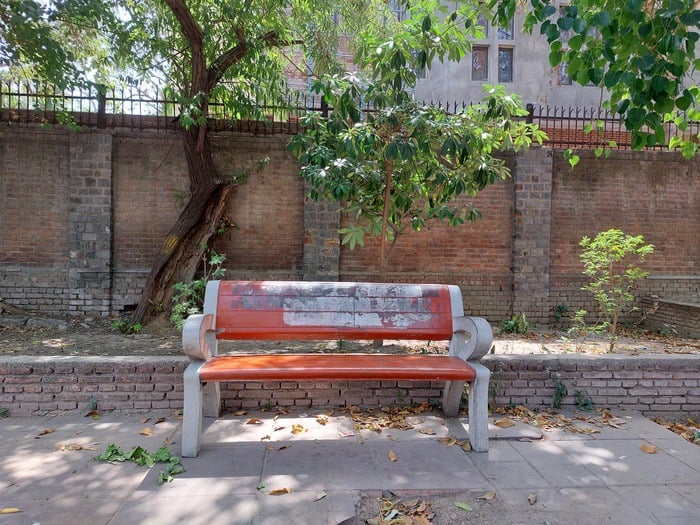 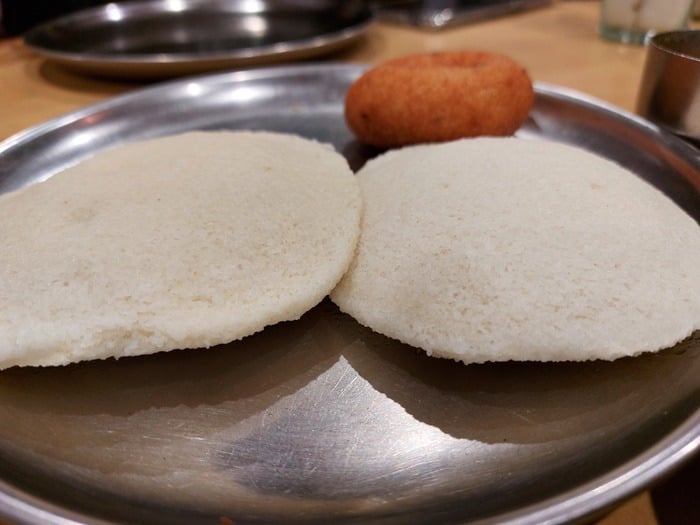 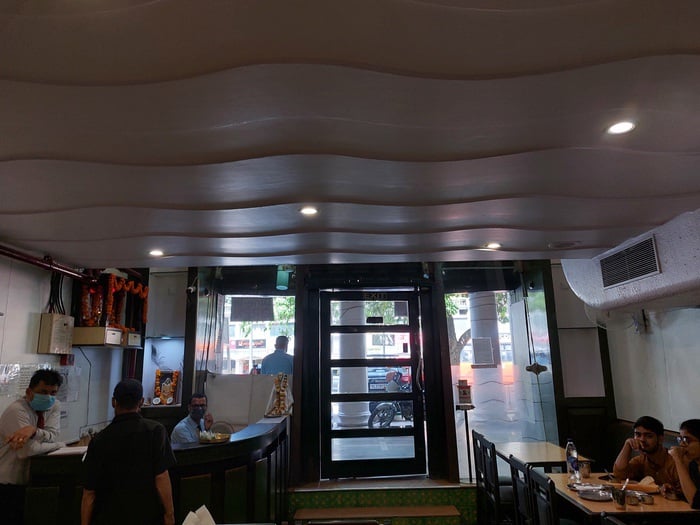 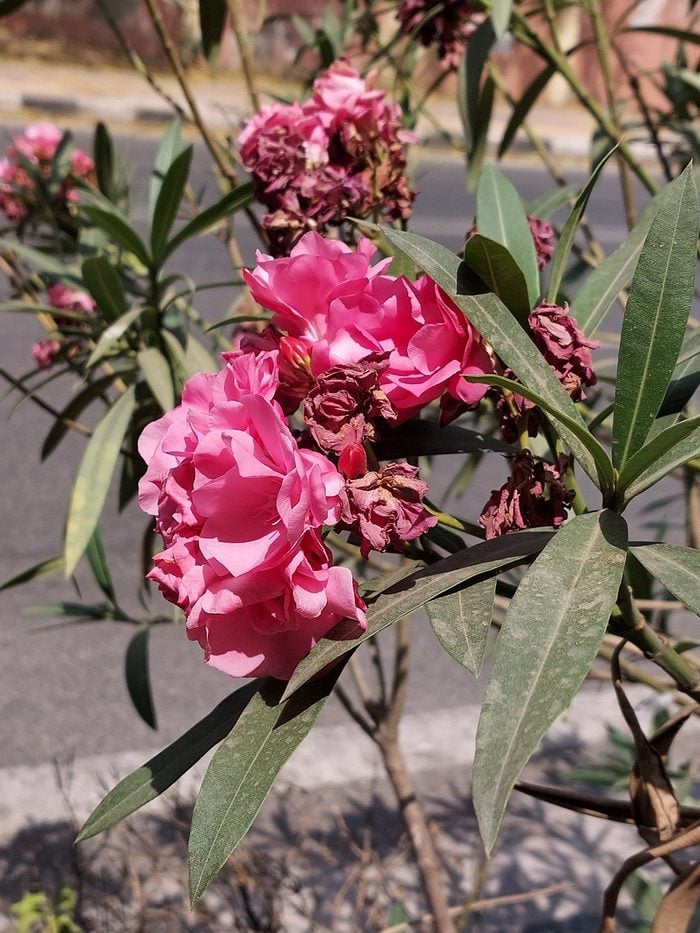 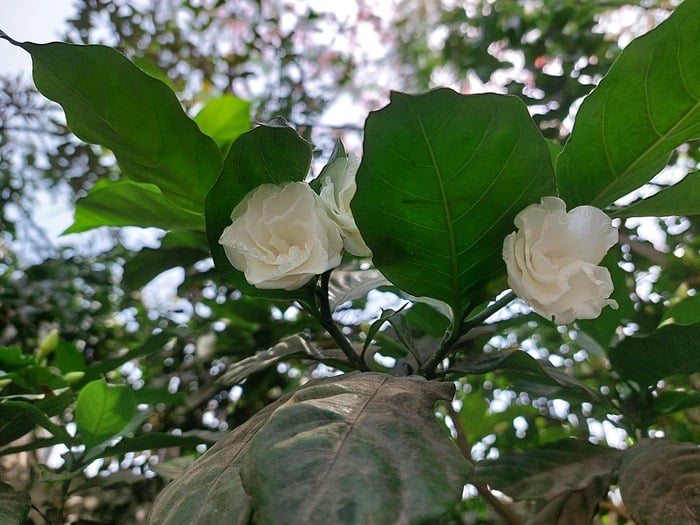 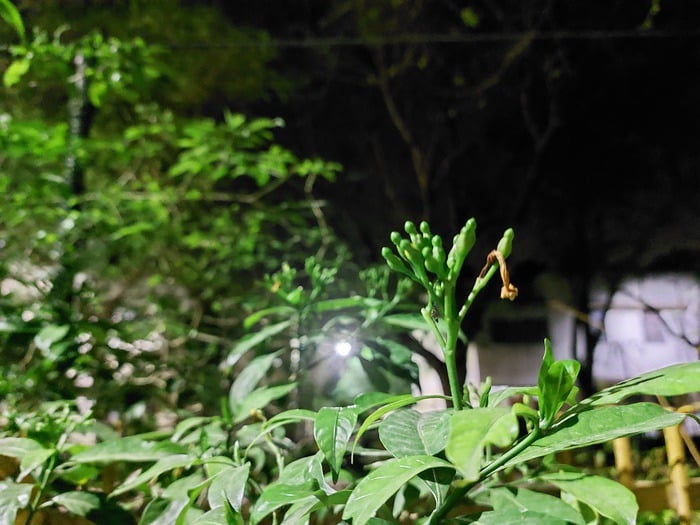 The depth sensor, however, lacks the same magic. The bokeh created often missed out on the edges or blurred them with the background.

While Samsung Galaxy A52 does really well in the detail department, it fails to reproduce colors that look real or even close to real settings. The colors we got were quite oversaturated, especially in well-lit conditions. At first, it seemed this was because we were viewing images on the AMOLED display, but another look on another display showed us that the saturation overboard was actually the cameras’ fault. The phone did well in low-light conditions. While it did brighten up the scene a little more than we liked, the noise levels remained low and the pictures did not seem too grainy.

The camera interface on the A52 is also loaded with modes and features. It comes with an inbuilt Snapchat filter mode called Fun where you get Snapchat filters right in the camera app. There is also Single Take which picks the best shot out of a four-second video and gives you some secondary shots to choose from as well. The phone takes 16-megapixel shots by default. You can change the resolution by tapping on the small [3:4] icon on the top of the display in the camera interface.

The Samsung Galaxy A52 brings a 32-megapixel sensor with an f/2.2 aperture. The selfie camera delivers sharp pictures which can easily qualify for any of your social media platforms although oversaturation is a problem that persists here as well. The phone takes 8-megapixel selfies by default. You can change it to 32 by tapping on the same [3:4] icon on the top of the screen.

Android 11, One UI, and too much bloatware 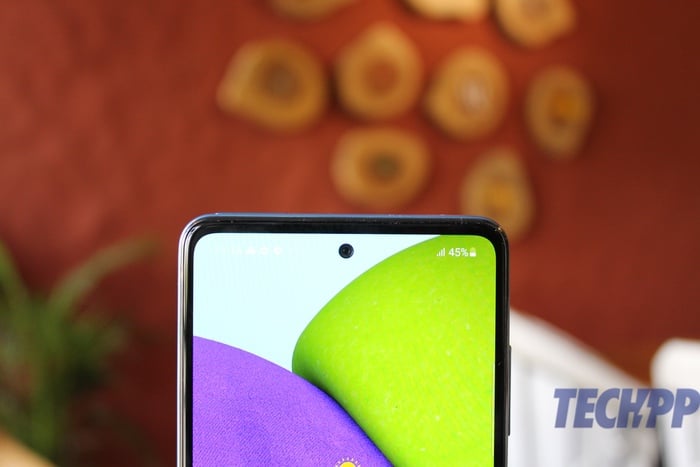 The Galaxy A52 comes with Android 11 topped off with Samsung’s One UI 3.1. While it has come a long way from the crazy days of TouchWiz, we have not been the biggest fan of the Samsung UI. It comes with too much bloatware for our liking and unfortunately, that remains true with the Galaxy A52 as well.

While the interface is generally easy to get used to and basic functions and features are pretty simple and easy to access, the experience can get a little overwhelming if you dive deeper into functionalities and options – Settings still remains a bit of a nightmare. Now, if you want a feature-rich interface and a phone with lots of pre-installed apps that you can just pick up and get going, this can work for you, but it can all be a little overwhelming at times. 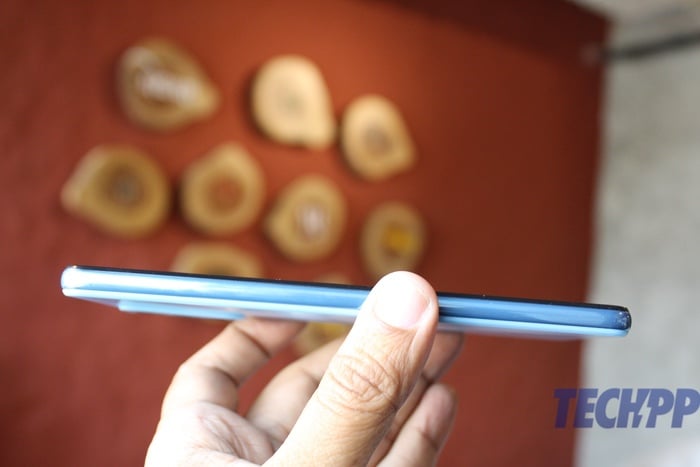 The Samsung Galaxy A52 is powered by a 4,500 mAh battery. The phone easily managed to stay with us for a day and a half on a single charge with the load of our daily chores on its shoulders which was surprising considering that we kept the tall display’s refresh rate at 90 Hz. The battery life will take a dip if you push it through heavy-duty games too much, but that is to be expected.

The phone comes with support for 25W fast charging which is not really that impressive, when you consider that 33W and even 65W fast charging options are available at much lower price points. The fact that there is only a 15W charger in the box makes the charging time even longer – it takes a little more than two hours to charge up that battery, which is on the higher side, given its size. 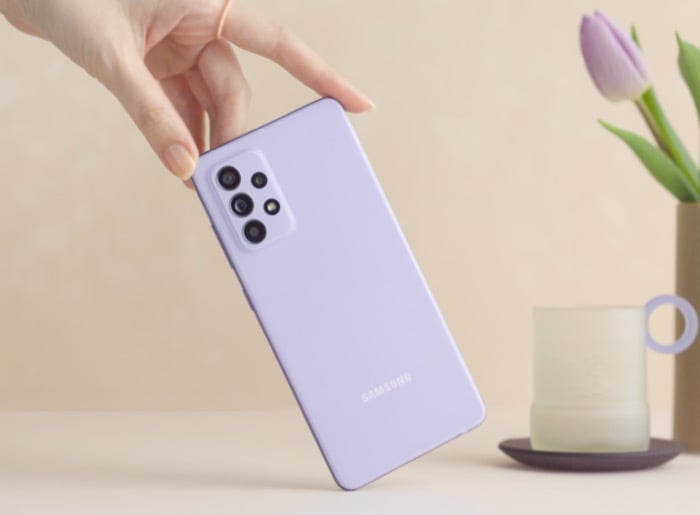 At a price of Rs. 26,499 for 6 GB/ 128 GB variant and Rs. 27,999 for 8 GB/ 128 GB variant, the Samsung Galaxy A52 finds itself in the middle of some serious competition. With no real specific strength other than out of the box design and decent specs and performance overall, it does not seem to have a major “wow factor” to counter the challenge from the likes of the OnePlus Nord, the Xiaomi Mi 10i, the Realme X7 Pro, and even Samsung’s very own Galaxy F62. These devices not only offer better specs and features but some (the OnePlus Nord, the Realme X7 Pro, and the Xiaomi Mi 10i) also come with 5G support, which might make them future-proof in the eyes of some. As this is being written, Xiaomi has also added the Mi 11X to the mix, another headache for the A52.

All of which makes it appear as if the Galaxy A52 will have a tough time repeating the bestselling achievements of its predecessor. It is a very good option for those who want a phone that looks different and performs well but starts fading the moment the spec sheet comparisons come into play. The Galaxy A52 ticks a lot of boxes but does not really top the class in any significant department.

LaptrinhX
—
Samsung Galaxy A52 Review: Big shoes to fill with big competition around
Share this