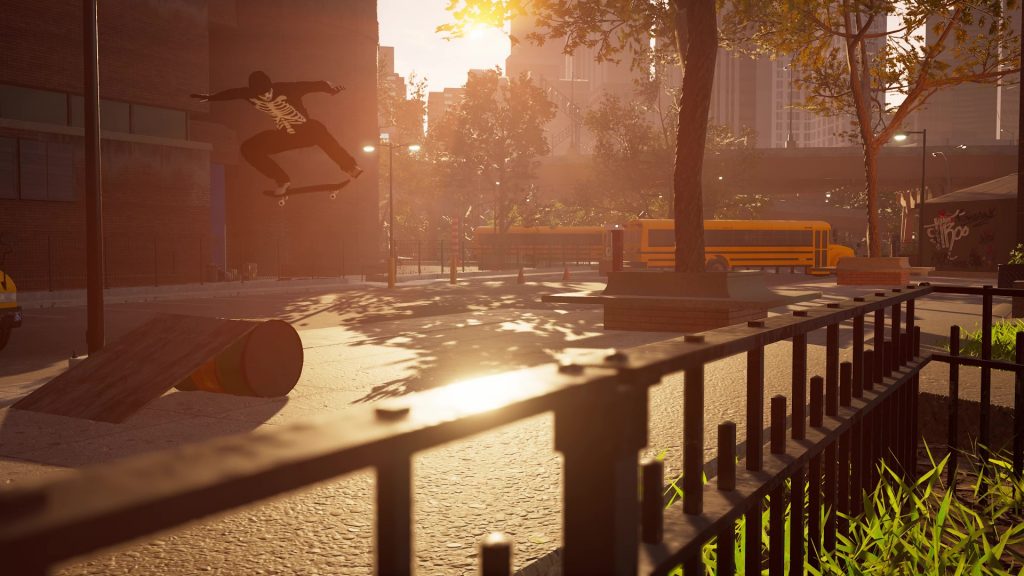 The world has not had a skateboarding sim on a major console platform for 10 years. Skate 3 marked the untimely end of the genre, with many still asking for a new entry in the beloved series. The absence of a modern skateboarding game has led indies to take matters into their own hands. Among the best is Montreal-based Crea-ture Studios and its game Session.

The Xbox One release of Session was revealed at E3 back in 2018. Now two years later and after a few delays, Crea-ture Studios’ skateboarding sim has finally kickflipped its way to Microsoft’s platform. Was the wait worth it? While it doesn’t have the intuitive “flick-it” control system of Skate, Session is incredibly promising.

It should be noted that Session is currently in early access. There are several small issues I have had playing both the Xbox One and PC versions, but it hardly takes away from how great this game is. I did preview the PC version of Session back in September. However, there is so much content that has been added since its Steam Early Access release.

There are now five different locations you can skate in; this includes Chatham Towers, Pyramid Ledges, Underground Parking, LES Coleman Park, and Crea-ture Park. Chatham Towers acts as a hub world, with the rest of the locations accessible through various doorways found within the world. However, there is no way to really know where to find these entrances unless you explore since they aren’t really marked. This would be a huge issue if you could only access these locations by finding them within Chatham Towers, but luckily, you can just go into the pause menu and select the area you want to skate in.

Although most of Session features street spots, there is a ton of variety within these five areas, some of which are based on real-life spots in New York City. I feel like I’m finding a new spot around every corner every time I play, especially at Chatham Towers. There hasn’t been a moment within my 10 or so hours with Session where I felt any repetition within the environments. I am always striving to hit a new line or trick every day. 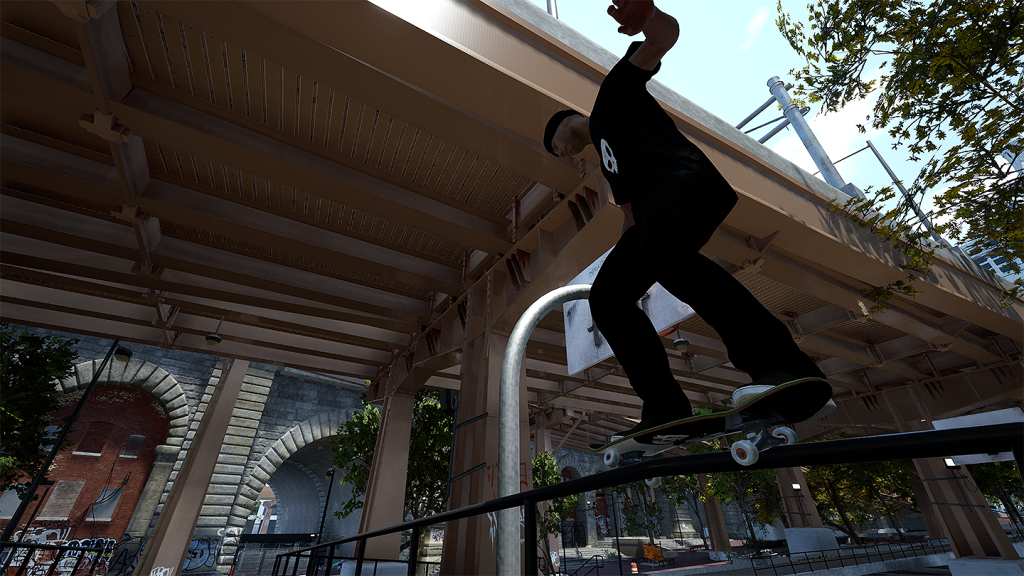 “Session‘s trick system is hard to get used to. If you are expecting it to be like Skate, you will be disappointed. But if you have the patience to learn, the trick system is so deep and satisfying.”

This includes tricks just on flat ground. While I’ve familiarized myself with just about every trick available in my character’s regular stance, performing nollie, fakie, and switch versions of those same tricks is something I still need to master. Each stick is a leg on your skater; the left stick is the left leg and the right stick is the right leg. When you want to do a trick in a different stance other than your default stance, you essentially have to perform the trick in reverse.

For example, let’s say your character’s stance is regular and you want to perform a kickflip. To do a normal kickflip, you press down on the right stick to set up for the trick; you then let go of the right stick and flick the left stick to the left since that is the direction your foot takes when performing a kickflip. To do a switch (or goofy) kickflip, you hold the left stick down to set up since your left foot is now at the tail of the board. You then flick the right stick to the right since that is the movement your right foot makes when doing a switch flip. The same logic applies to fakie and nollie kickflips.

Session‘s trick system is hard to get used to. If you are expecting it to be like Skate, you will be disappointed. But if you have the patience to learn, the trick system is so deep and satisfying. It is the best representation of performing a trick on a skateboard. Every trick I land, whether it is on flat ground or over a 10-stair, is just so satisfying. It perfectly exemplifies the real-life process of finding a spot and landing a trick as cleanly as possible.

There are two facets of Session‘s gameplay that are somewhat bothersome. The transition skating, which was added not too long ago, just doesn’t feel great. Any time I try to go up a quarter pipe and do a grind or flip, it hardly ever pans out the way I want. It might just be due to lack of practice, but there have only been a handful of times I landed something that actually looked and felt awesome.

The second odd gameplay detriment involves the ankles of the skater. A lot of the times when I do a frontside flip, or really any trick where I have to spin my body and flip the board, my character’s feet will land on the board early, but his body has not quite caught up, so his ankles look all twisted. It doesn’t necessarily take away from the gameplay, but when I want to film a line or take a picture, it definitely takes the realism out of that moment. 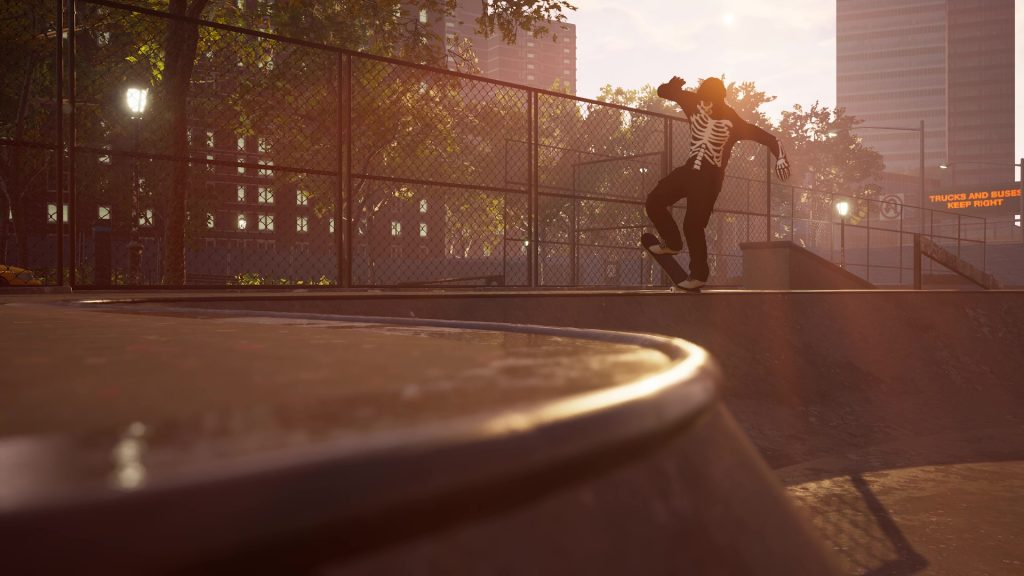 “Session has the potential to be the best skateboarding sim.”

As mentioned before, Session is in early access, which means there are portions that feel unfinished or not quite fleshed out. This includes proper character customization, a use for the money you earn for completing challenges, the graphics, and a bit more. Despite that, it never felt like it was a huge detriment to the game itself, but a fleshed-out character creator and optimized graphics would be welcome when the game finally releases.

It is great to see Session usher in a new era of console skateboarding games. With Skater XL in July and Tony Hawk’s Pro Skater 1 and 2 in September, we are in an odd renaissance for the genre. If you have the patience, you should pick up Session on Xbox One. It is difficult, but it is so rewarding. It gives you a sense of familiarity with its low camera angle and thumbstick-driven controls, but it is so different and has so much depth. Session has the potential to be the best skateboarding sim, and I am excited to see it progress.

The post Session on Xbox One Brings Skateboarding Sims Back in Rad Fashion by Michael Ruiz appeared first on DualShockers.