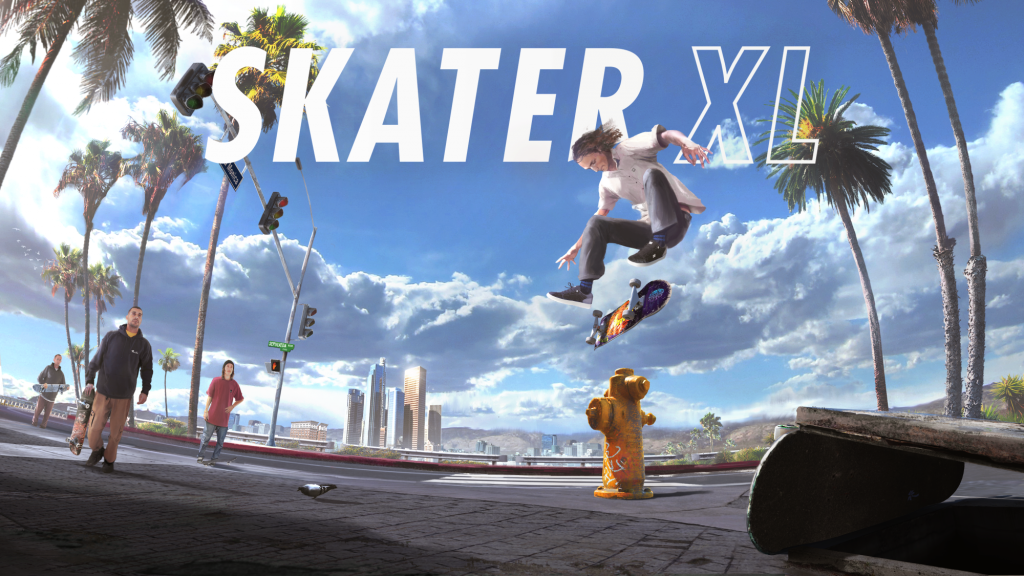 It has been 10 years since Skate 3 released for Xbox 360 and PS3. While it isn’t the best entry in EA’s beloved franchise (Skate 2, baby!), it was the last time we saw a major skateboarding video game release. Sure, Tony Hawk’s Pro Skater HD and Tony Hawk’s Pro Skater 5 launched in 2012 and 2015 respectively, but we don’t talk about those dark times. There has been a huge hole in the video game market and it is finally being filled after those 10 long years, starting with Skater XL.

Developed by the California-based team at Easy Day Studios, Skater XL attempts to bring back the simulation style of the Skate franchise, but with its own unique take. It may not be the cleanest landing, with a few frustrating quirks, but it’s certainly a stylish and fun take on a genre I’ve personally missed.

Skateboarding is, in many ways, a form of expression. Everyone has their own style; someone like The Nuge has a more aggressive style than someone like Daewon Song, who is more tech-focused. In Skater XL, that expression is found in its gameplay. It is arguably the most imperative facet of any skateboarding game. Easy Day Studios has crafted a pretty rad trick system that is incredibly expressive, but comes at the cost of some oddities that break the immersion I would want in a sim-style skateboarding game.

Similar to Skate, Skater XL uses the analog sticks to perform tricks. However, the majority of tricks require both sticks, each representing the skater’s feet; the left stick is the left foot and the right stick is the right foot. In order to turn the board, the player has to use the triggers. For example, if I wanted to do a frontside flip in regular stance, I would want to first position the right foot at the tail, which is done by pulling the right stick down. To initiate the flip, I want to let go of the stick to pop the board, and then flick the left stick to the left, producing that kickflip motion. While doing that, I want to pull the left trigger so the skater does the frontside 180.

For the most part, this trick system is very fluid and fun to play around with. It really does feel like skateboarding. This is also in part due to the physics-based nature of the system. The tricks feel and look different depending on how I would flick the sticks. It also looks pretty natural in-motion. There is definitely a learning curve; when I started playing the early access version a few months ago, it took me about an hour to feel comfortable. But once it clicks, the potential for lines in any given map feels endless. 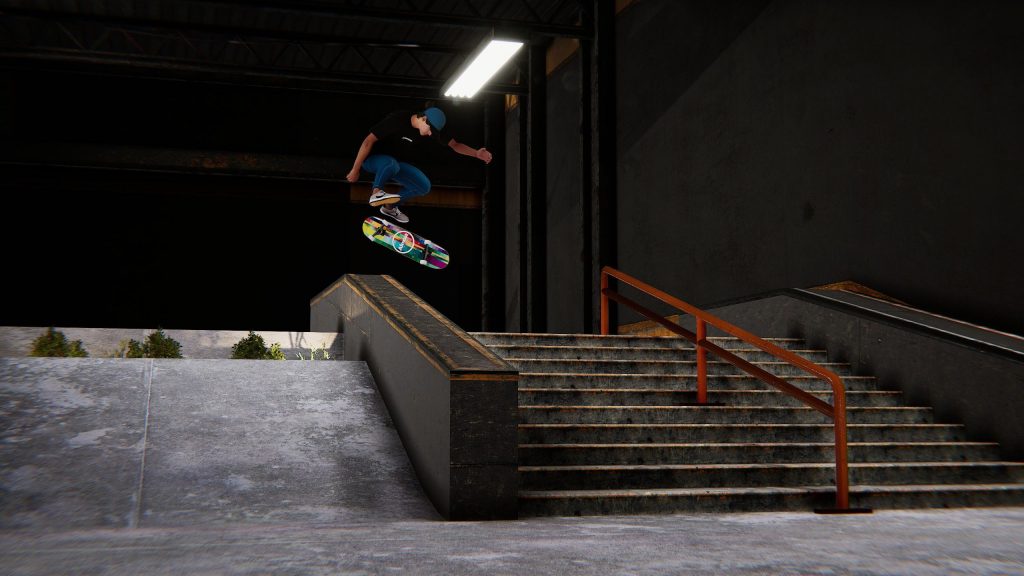 “For the most part, this trick system is very fluid and fun to play around with. It really does feel like skateboarding.”

However, there are times when these tricks don’t look all that natural. The physics-based system is a bit of a double-edged sword. Yes, I was able to produce incredibly natural-looking flips a lot of the time. But sometimes, and especially when I attempted more advanced tricks like 360 inward heelflips or nollie hardflips, the board does some very unnatural motions. Some flips will kind of just find its way to the skater’s feet mid flip, almost like a magnet. It looks very odd, and was a bit of a damper when I was attempting a line repeatedly because a trick just looks so unnatural.

There are also times when the character’s body would bend in ways it probably shouldn’t. One of the more recurring instances of this is when I would do a boardslide and landing fakie. The skater’s knees would bend in before the landing. While I had a good laugh at how this man just broke his knees and then re-popped them back during a trick, it definitely became frustrating when I was trying to create “realistic” looking clips.

However, most of those odd and unnatural occurrences never frustrated me enough to hate the trick system. Since most of the game is finding spots and attempting lines over and over again, it never felt disheartening to restart a line. It also helps that the spawn point tool is useful. If I was unhappy with a line or my skater’s body contorted in some odd way, I was able to go back to the spawn point I placed instantly. I could also replace my spawn point on the fly if I felt like the current spot wasn’t placed well. 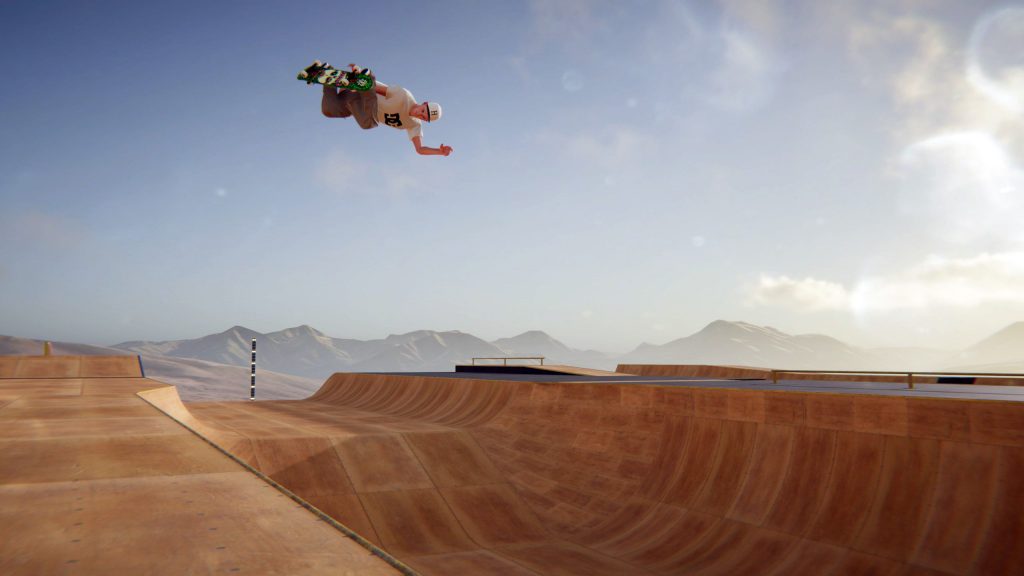 One thing that bothered me initially with Skater XL’s gameplay was the most basic of tricks: The ollie. There were two factors that irked me about the fundamental trick when I started playing. The first, there are really only two different ollie heights; the second, the high popping ollie is comically high. It still kind of bothers me now, because ollieing up a curb will always look so ridiculous, but every level seems to be designed with these ollie heights in mind. So, it doesn’t look so ridiculous all the time. Just sometimes.

Again, everything I’ve talked about, when all put together, really makes for a fun experience. The only aspect of Skater XL’s gameplay I really struggled with finding much joy in was with how it handles transition skating. This isn’t a flaw exclusive to this game. Skating on ramps, particularly bowls and halfpipes, in Skate and Session are also not great. I never feel like I’m in control of my skater when I’m on a ramp. For example, let’s say I want to do a frontside flip on a quarter pipe. I figure if I initiate the trick at the top of the ramp, I would then go back down rather than moving forward on top of the ramp. That was not the case. There were times where I did go back down the ramp, and a lot of times I would just move forward.

“One of the most impressive parts of Skater XL is its replay editor. I absolutely cannot stop messing around with it.”

For bigger ramps, like the halfpipe on the big ramp level, I needed to pump to get enough speed to move up the ramp. However, when I did pump, the skater went way too fast, and more often than not, ended up on top of the ramp rather than going back down it. Sometimes the stars would align, and I was able to perform some sick trick, but even then it doesn’t feel as satisfying as street skating.

One of the most impressive parts of Skater XL is its replay editor. I absolutely cannot stop messing around with it. There is a bit of a learning curve, but the menu for the editor is so clean and straightforward, it really doesn’t take too long to start making cool clips. It actually surprised me how easy it was to make a clip that really looked impressive. I may have a few gripes about Skater XL’s gameplay, but the incredible replay editor will be the reason why I’ll always come back and shred at places like Easy Day High School and Downtown L.A.

Speaking of those two locations, the maps in Skater XL are all really fun to skate around. Easy Day High School and Downtown L.A. are easily the best of the eight maps available at launch. They are the largest with some iconic spots, like the Leap of Faith and Staples Center. Heck, there is a level that seems to be an accurate depiction of the West L.A. Courthouse (which you can watch Eric Koston skate on above).

The one map I lost interest in quickly was the big ramp. It is super fun to get crazy air of the wooden goliath, but as I said before, the transition skating just isn’t all that fun. For what it is, it is a fun map to mess around with for a bit, but I would rather skate Easy Day High School over that any day.

There really is a lot to love about Skater XL, but it does lack a robust character creator. All in all, there are 11 different player models. This includes four males, four females, and three pro character models. Also, there are several different hair types, hats, clothing, and boards, some of which are from real-life brands like New Balance, Element, Primitive, and Independent.

Despite having all these different brands, there really wasn’t much variety in the clothing or boards available. Every shirt, bottom, and hat type all fit nearly identical. For example, the unbranded jeans looked exactly like the DC branded jeans, just a different color. There aren’t as many board options, either. There are enough options to make a skater with distinguishable features, just not enough to create one that is wholly unique. 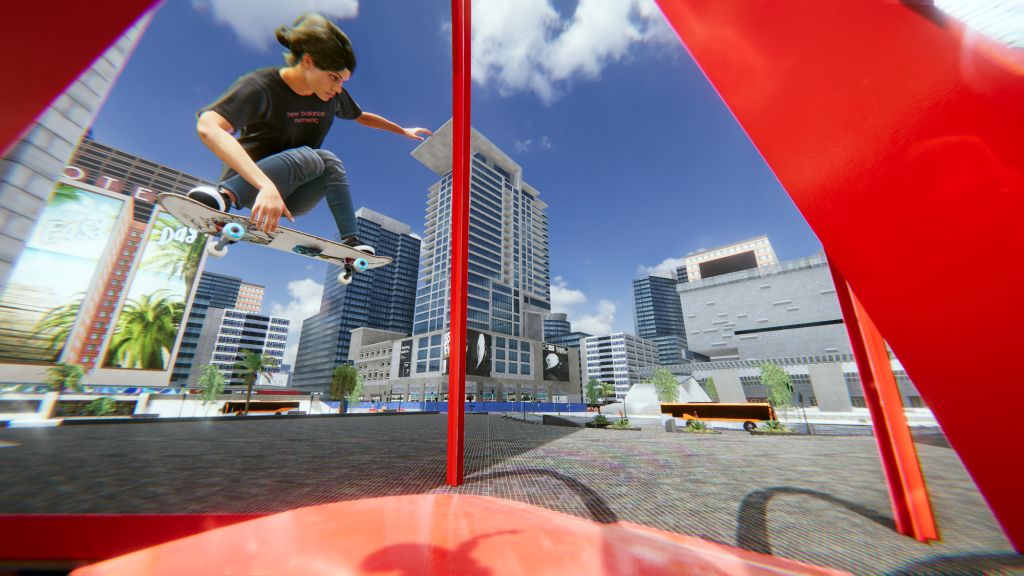 “Skater XL has successfully brought back the skateboarding genre…”

From its fun gameplay to its stellar replay editor, Skater XL is a great game to kick off this resurgence of the skateboarding genre in video games. Really, the only thing standing in the way of this game’s success is whether players can get down with the lack of a progression system or campaign. Yes, there are challenges for each map, but they are really meant for newer players who want to learn the ropes or need some ideas for spots or lines to skate. From what I can tell, everything is unlocked at the start, and the “progression system” is the player’s ability to perform tricks in a manner that is satisfying, kind of like real skateboarding. Personally, I love the loop of finding a spot, committing to a trick, and performing it as clean as possible. That is enough for me. But I can see players becoming disinterested if there isn’t really anything to strive for.

I mentioned this in my interview with Easy Day Studios, but I have essentially waited for a game like this to release before I even started working for DualShockers. The once elusive, but now announced Skate 4, and really the skateboarding genre as a whole, has been part of many E3 editorials I’ve written the past couple of years. It is one of the very few genres I really identify myself with. So, to see a small studio like Easy Day Studios create something that is not only reminiscent of the games that clearly influenced them, but overall improves on what its predecessors did, is heartening. Sure, it has its fair share of flaws, but none of them take away from how much fun I’ve had. Skater XL has successfully brought back the skateboarding genre, and I am eager to see how Easy Day Studios supports the game moving forward.

The post Skater XL Review — Ride Like the Wind, Straining the Limits by Michael Ruiz appeared first on DualShockers.