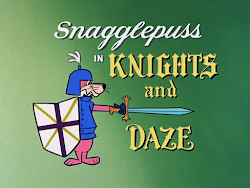 “Then I shall Mildred forth. Or is it Sally forth? Or July 4th, even?” 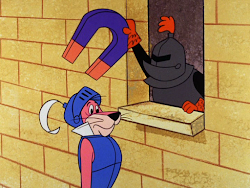 Plays on words like that are a Mike Maltese specialty. And he had to rely on them in this cartoon because there are not many gags. It takes half the cartoon just for Snagglepuss the Lionhearted to set off on his quest to try to vanquish the Stormy Knight. That doesn’t leave much time for gags.

The first is the weakest. Stormy uses a magnet to pick up Snagglepuss by the armour and then drop him to the ground. Next, he pretends to be a “travelling roundelay” in the best gag of the cartoon. I particularly like the marotte with the Snagglepuss head on it. A joust (“Joust a minute,” Maltese has the nerve to put into Snagglepuss’ mouth) follows, then a sword fight, where Snagglepuss reveals to King Arthur in the final scene that he’s in possession of the Knight’s sword (“What do you think this is?” he asks the king, pointing to the sword puncturing his butt, “A shiskabob?”). 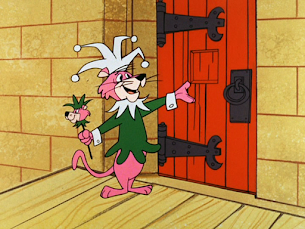 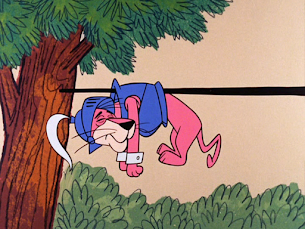 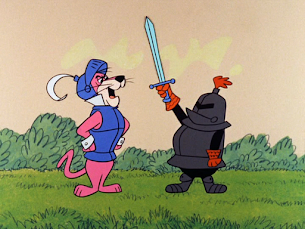 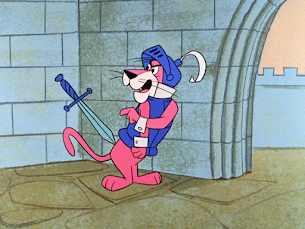 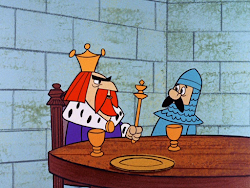 Maltese was the author of Rabbit Hood, in which he fills the cartoon with really funny pseudo-Elizabethan English. He’s at it again in this cartoon because, to be honest, dialogue has to carry it. La Verne Harding’s animation isn’t the least bit distinctive. Perhaps Snagglepuss’ best piece of verbal virtuosity comes as the sword fight is about to begin: “Think I'm scared, huh? Think I'll show the yellow crumpet and run for zounds, eh? Well, I got a trusty sword, too. I still owe six and thruppence on it.” And in disguise as the jester trying to bluff his way into the Knight’s castle: “Why doth a partridge cross the drawbridge?" (After getting inside:) Who cares? I got a better story. Dramatic, even.”

The Stormy Knight uses weather metaphors in his exclamations, including “Buckets around in thunder! What churl doth knock at me castle door?” “By lightning and partly cloudy! This dolt must be dispensed with forthwith” and “By fog and smog!”

Snagglepuss lets out with three “Heavens to Murgatroyd!”s as well as variations on his usual catch-phrases, including, but not limited to a fare-thee-well with:

Maltese’s story is pretty well constructed. It starts in the present with a guide offering a tour of King Arthur’s castle (Daws Butler, playing the tour guide, doesn’t break down “castle” into two syllables, but we do get his “once-st” for “once”). A tourists asks about the pillows next to Arthur’s chair and then the rest of the cartoon is in flashback, ending with the sword-in-butt gag (Maltese then leaves the viewer to assume the connection between that and the pillows). As soon as I saw the drawing of the tourist with the jaw line dropping down from the nose, I thought “Tony Rivera.” Sure enough, Rivera is in the credits as the layout artist who designed the incidental characters. 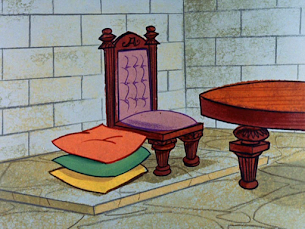 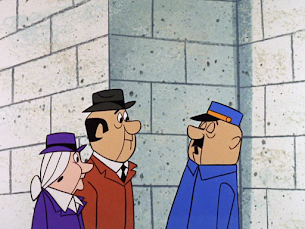 Bob Gentle handled the backgrounds. Here are a few drawings. 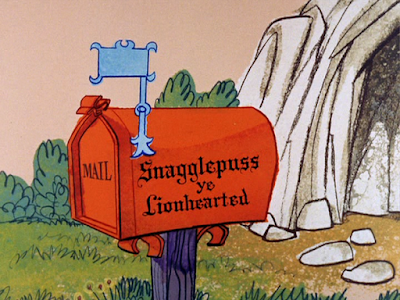 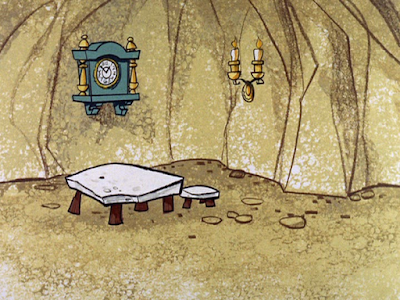 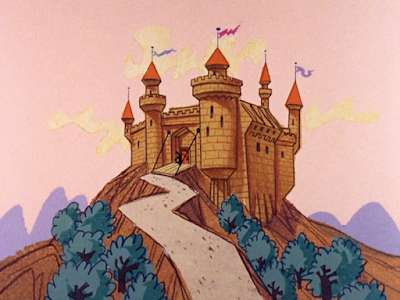 Hoyt Curtin’s version of “London Bridge” is heard in the opening scenes of the castle. You’ll hear some Flintstones underscore music (some with a bassoon or contrabassoon) on the soundtrack as well.
yowpyowp snagglepuss
Latest Posts