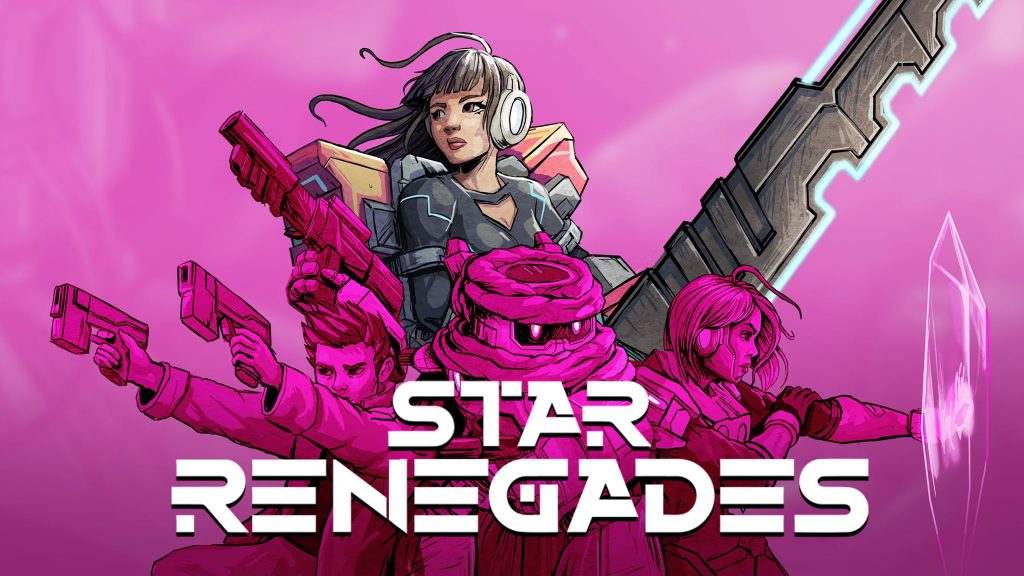 I’m a sucker for a good indie rogue-lite. Two of my favourite games from the last few years are Dead Cells and Slay the Spire, both of which fall well and truly into this category. So when the opportunity came up to review–and previously preview—Star Renegades, I was happy to oblige.

As you start the game, you’re thrust straight into a war with invading enemy forces. Rounding up a ragtag bunch of renegades, it’s your job to hop from planet to planet wiping them out. While your first mission is ultimately unsuccessful, Star Renegades introduces you to J5T, your robot companion. J5T has the ability to traverse multiple dimensions, and should you fail, will hop across to the nearest dimension where enemy forces are invading. As soon as you arrive in your “new” world, you’re ready to begin your assault again. While only a small detail, it helps to integrate the rogue-lite elements into the game and explains your ability to respawn in a more interesting way.

Throughout the game, Star Renegades doesn’t attempt to dazzle with a deep and complex story but rather sticks to what it’s good at, interspersing narrative elements as and when it’s appropriate. While I can live with its slightly basic story, one of my biggest gripes with the game is that the mission structures are also too simple. You land on a planet and have three days to explore and defeat enemies before tackling that planet’s Behemoth. Yes, you can choose your route to the boss, which enemies to fight, which to avoid and which chests to aim for. But ultimately each mission–and therefore planet–is fundamentally the same.

The more I played of the game however, the less of an issue this became. I realised that the joy of Star Renegades was less about the missions themselves, and more about building your ideal party and finding the perfect weapons and loot to compliment them. The game has a whopping 13 different character classes, each supporting the others in different ways. Being a rogue-lite, you expect to die, but that just gives you the opportunity to experiment again. By the time I’d reached the enemy Mothership, I’d experienced the vast majority of the classes, found my perfect combinations, and had a blast doing it. 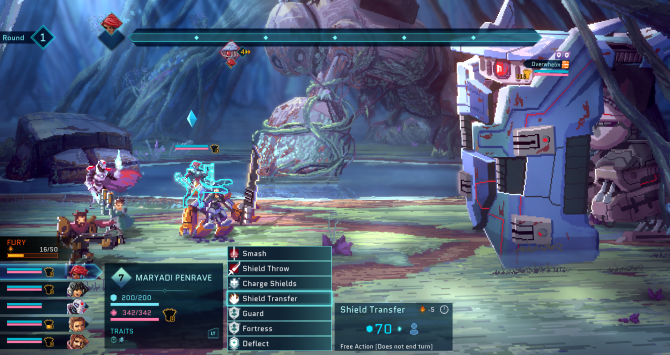 “While the battles can be incredibly difficult, Star Renegades rewards you for dying.”

When Star Renegades describes itself as a “tactical RPG”, it’s certainly not kidding. The battle system, like the rest of the game, really gets the cogs turning. Each moment of the turn-based battles are played on a timeline. Every move, both yours and the enemies, hit at a different point and it’s up to you how you chose to tackle it. Do you choose to hit harder but further down the timeline, taking damage in the process, or do you hit earlier, potentially defeating enemies before they can attack you? Do you focus on one enemy, knocking them off the timeline so they can’t attack, or do you spread your damage across them all?

There really is no way to fully describe Star Renegades‘ battle system without dumbing it down. There are so many little nuances that come together and so many different possibilities during each combat. All of these elements together make it one of the deepest and most rewarding battle systems I’ve personally ever come across within a turn-based game.

While the battles can be incredibly difficult, Star Renegades rewards you for dying. After every run, not only do you have a wider understanding of the different enemy types and what to expect going forwards, but you also have the opportunity to arm yourself for the next run. When you’re transported to the next dimension that’s being invaded, you’re presented with a whole bunch of shops in which to spend different currencies you’ve earned across runs. These can be used for new characters, permanent boosts, or different weapons and armour. 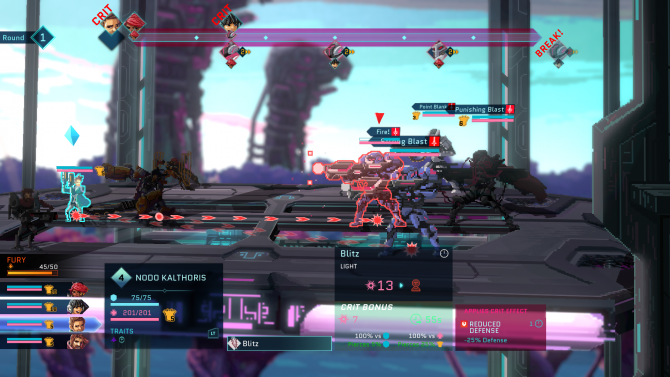 Although the game is a rouge-lite, in which death is a given, it can occasionally be jarring. The game isn’t nearly as snappy as many other rogue-lites, and a good run can last upwards of four or five hours. The frustration comes when you’ve assembled a good team and grabbed some decent loot along the way, only to fall because of a stupid mistake or a lapse in concentration. There’s little to no margin for error, and it’s these little missteps that can send you back to square one.

Initially it wasn’t as frustrating as I thought it would be, after a couple of three-hour runs came crashing down. I felt like I’d learned plenty, unlocked a couple of new party members for the next runs, and generally had a great time doing it. However, my opinion quickly changed as I made it all the way to the final boss and one wrong move cost me. I knew what I’d done as soon as I’d pressed the button, but there’s no option to reselect the move you choose, meaning you need to be 100% certain you’re doing the right thing before committing.

Like the character classes, each of the enemies and bosses also seem well thought out. There seemed to be more different enemy types in Star Renegades than party members. The variety is great and kept battles from feeling stale, which, considering that’s where the bulk of your time will be spent, is important. 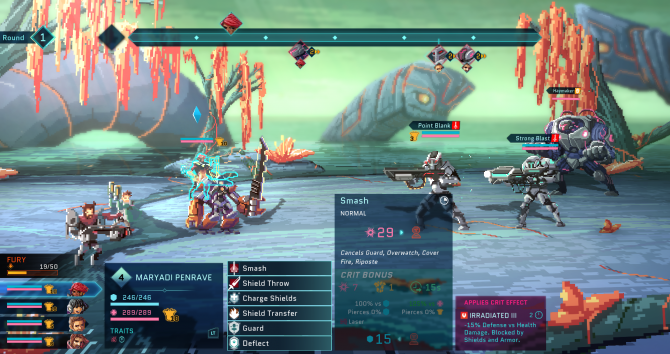 When you taste defeat, Star Renegades borrows a very popular mechanic from another series. Each of the planets you defend is being invaded by an enemy with a hierarchy, akin to that of Middle-earth: Shadow of Mordor or Shadow of War. There are five adversaries on each planet, dotted around ready for you to do battle with. Should you defeat them you’ll be rewarded; however, should you fail, they’ll receive promotions, level up, and become harder next time you face them.

While the adversary system is a nice touch, it isn’t anywhere as deep as that in the Middle-earth games. Yes, each one has their own personality, but they’re nowhere near as interesting or insane as the Uruk you face in Middle-earth. They don’t hunt you down, they don’t descend into madness; they’re just tougher enemies, ready for if you want a challenge.

The deep combat and the adversary hierarchy aren’t the only systems and mechanics in the game, Star Renegades is laden with them. Levelling up in the game is slightly atypical. Rather than earning EXP for the whole party, you’re awarded “DNA” at the end of each battle. This DNA can then be distributed amongst the party to level them up that way. It allows you the freedom and choice on who needs it most, and once again gets you thinking. You may have an exceptional piece of gear, but one of your characters is vastly under-levelled for it. This system lets you take the DNA and invest it how you choose. 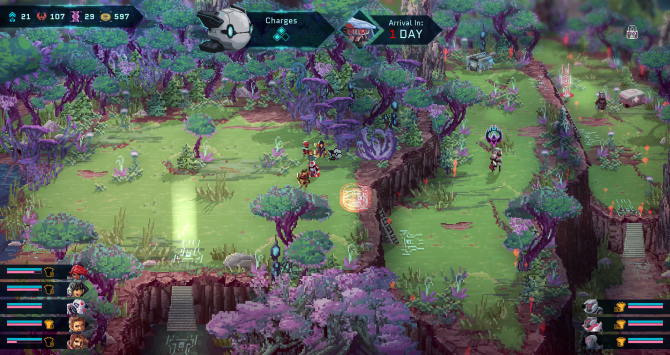 “Star Renegades has lots of systems. While it can certainly be overwhelming at first, once you get stuck in and start to understand them, they all compliment each other well and work nicely.”

Each mission is also split into days. At the end of each day, you and your party can camp, allowing you the opportunity to replenish health and buff yourself for the following day. Rather than automatically happening however, you play cards to implement these buffs or to heal yourself. The cards are unique for every character and are earned by levelling up. It’s yet another system within the game that gets you to think. You can only play a limited number of cards each night and it’s down to you how to best do it.

It’s at this point where you can also build up affinities between each party member. When one member uses a card on another, it strengthens their bonds and the stronger the bond, the better the boosts between the two. Every relationship between two party members has three levels, with each level providing a permanent stat boost for the other party member. For example, if one character has a strong relationship with a healer, their buff is going to be health-related. Not only that, but stronger bonds between two cohorts will also allow them to use combos in battle – powerful attacks that can affect enemies in different ways. While these attacks look good, they’re definitely underpowered. This is something that has been noted by the developers however, and they’ve said they’ll be adjusting this with a day one patch. 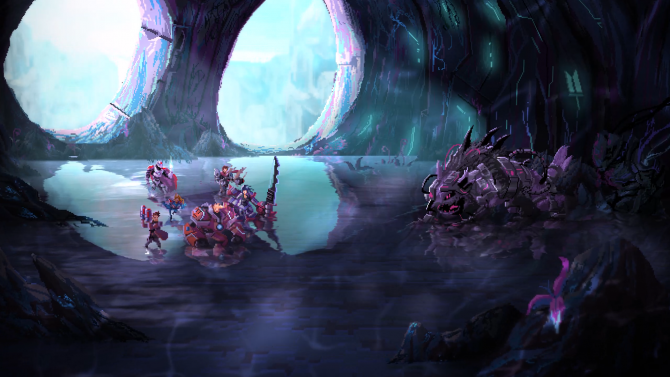 As you’ve probably noticed, Star Renegades has lots of systems. While it can certainly be overwhelming at first, once you get stuck in and start to understand them, they all compliment each other well and work nicely. As well as drawing similarities and inspirations for mechanics from other games, Star Renegades is somewhat of a love letter to other franchises within popular culture. It’s clear the developers have an affinity for Star Wars, as even someone who’s not the biggest fan of the series like me (yes, I know), I could spot a few references. There’s also a nice nod to Super Smash Bros. when you add a new character to your team.

I’d be remiss if I didn’t also mention how pretty the game is. While I love it, pixel art at this point is becoming for some people, a little played out. A large percentage of indie titles these days lean on this art style, meaning it’s less of a novelty than it perhaps used to be. Star Renegades feels different though. Yes, it is pixel art, but it is stunning. The colour palates are beautiful and each character, enemy and environment are clearly incredibly well thought out and crafted with love.

Almost everything in the game is hand-drawn and animated too, with the developers saying that almost all of the sprites have between 400-500 frames of animation. This didn’t go unnoticed either. I could have made battles last half the length had I of skipped these animations, but I just couldn’t bring myself to do it. They’re fantastic and deserve to be watched over and over again. 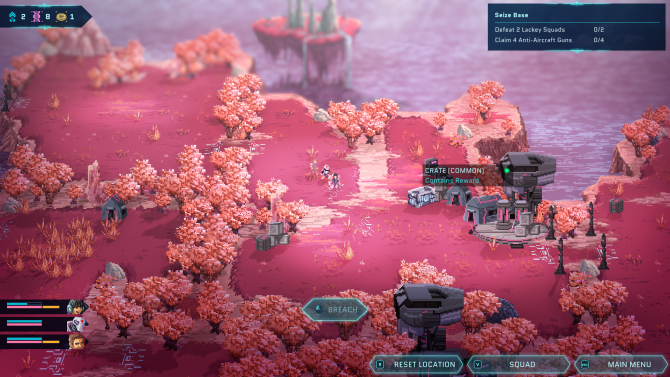 Star Renegades is, at its core, a tactical rogue-lite RPG that’s laden with well thought out systems, a varied cast and a beautiful world. It’s an addictive foray across a range of planets in which you lead a bunch of misfits into battle against malevolent enemy forces. It’s a thinker’s game; a game where you need meticulous planning and a well considered approach in each battle, and I had a blast with it. Star Renegades is a delight and one that you definitely shouldn’t sleep on.