This is a Sigatra Mitra ‘Hole-in-the-Wall’ site in India. Literally just three holes in a wall. That’s because it failed. The community can barely remember why they were installed or what happened. They do remember that they were vandalised (a known problem with unsupervised children?). 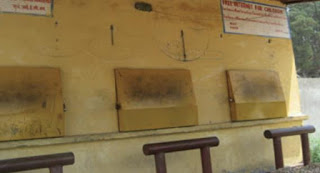 Here’s another, set in a school playground, the computers long gone. “What we see is the idea of free learning going into free fall” said Payal Arora. When Arora came across these two ‘hole-in-the-wall’ sites, accidentally in India, she discovered not the positive tales of self-directed learning but failure. One was vandalised and closed down within two months, the other abandoned and, apparently, had been mostly used by boys to play games. A real problem was sustainability, as no one seemed responsible for the electricity and maintenance bills.

Doubts
My own doubts arose when I gave a TEDx talk and the speaker after me was an academic from Mitra’s department at Newcastle University. She was well versed in Indian education, and went on to talk at length about feckless third world teachers and state schools, but she was also scathing about the hole-in-the-wall research, not only the research methods and conclusions. This made me more than a little curious. Sugata Mitra is treated by the educational world as some sort of saint. Otherwise smart and reasonable people go gaga for Mitra. Hailed as the ‘hole-in-the-wall hero’, few question his questionable research or even more questionable recommendations. Academics, who would go to the wall to defend the ‘lecture’, will hail the idea of replacing schools with hole-in-the-wall computers, not of course in their own institutions but certainly for poor people. Now I’ve spent the whole of my adult life creating and evangelising online learning but even I draw a line at his utopian vision. Here’s why I have doubts.

1. Funding.
Few realise that hole-in-the-wall funding came originally from from NIIT then the International Finance Corporation, a commercial Indian e-learning company and the for-profit side of the World Bank. I know them well and believe me, this is no charitable institution. As Arora (2010) points out, there is little real independent evidence, other than that provided by HiWEL itself and one must always question research funded by those who would benefit from a positive outcome. The lack of independent research on the sites is astonishing, something noted by Mark Warschauer, one of the few critics who have actually visited a site.


2. Holes in the research
Arora exposed a glaring weakness in the design of the experiment. The 75 days of learning (with a mediator) was compared to the same period in the local school but like was not being compared to like, so the comparison was meaningless. It was not comparing the amount of time spent on the hole-in-the-wall material with the same or similar amount of time in school. This is also true of Mitra's compadre at MIT Negroponte in his Ethiopian work.

3. School in disguise?
“Schools are obsolete” said Mitra – oh yeah? Far from being sited in open places, HiWEL sites are now invariably in school compounds. By being in the school it is difficult to do research that isolates the experience from the school, difficult to disentangle the role of the school (teachers, books etc.) and the hole-in-the-wall computers. Indeed, as HiWEL has explained, they involve ‘teachers’ in their implementation and mediation, making it almost impossible to isolate the causes of educational improvement. One could say, with Arora, that this has become “self-defeating”. The ‘hole-in-the-wall’ has become the ‘computer-in-the-school’. This is a subtle switch - evangelise on one premise, deliver on another.

4. Mediators
As HiWEL makes extensive use of mediators (teachers), the real lesson of the hole in the wall experiments is that teachers, or at least mediators, seem to be a necessary condition for learning to combat exclusion, mediate learning and avoid the vagaries of child-centred behaviour. Yet this is not really what the TED talks and hole-in-the-wall evangelism suggests. Another problem is that by seeing teachers as ‘invasive’, such initiatives can antagonise teachers and educators, leading to poor-support. Arora concludes are that these experiments do not work when not linked to the local schools and that, far from being self-directed, the children need mediation by adults. Arora goes further and claims that disassociating learning from adult guidance can lead to uncritical acceptance of bad content and bad learning habits.

5. Low level learning
Warschauer (2003) is even more critical than Arora. He claims that “overall the project was not very effective”, with low level learning and not challenging. In addition, he found that some of the many problems were the fact that the internet rarely functioned, no content was provided in Hindi, the only language the children knew, and many parents thought that the paucity of relevant content rendered it irrelevant and criticised the kiosks as distracting the children from their homework. Sure they learned how to use menus, drag and drop but most of the time they were “using paint programs or playing games”. This is hardly surprising and seems to confirm the rather banal conclusion that when you give kids shiny new things, they play with them.

Notice two things about this image – no girls and big boys at the screen. You get an odd skew in the data based on the fact that the few successes tell you nothing about the absent children, that got nowhere near the kiosks – these missing children turn out to be the many, not the few, and lot of girls. We should be careful about saying, like Mitra, that schools are obsolete, as they are our best bet in providing universal access and participation. Unmediated peer learning among children can be difficult as “self-organising children” are rarely optimal learning groups. Indeed, they are more commonly, narrowly defined peer groups, built around class, background, locale, a musical style, fashion, even power. The school playground is a competitive space that many children fear. It is, for many, a place of social isolation and exclusion. Most teachers and parents have experienced the evils of self-organised ‘peer groups’ not just on terms of pressure but also of exclusion and bullying. Indeed Arora (2005) has evidence that boys playing games was the real net outcome in Andhra Pradesh.

7. Educational colonialism. Mitra has been criticised for a form of educational colonialism. Who among you in the developed world would abandon all teaching and install ‘hole-in-the-wall’ learning for your own children? We are being asked to believe that the solution to the lack of opportunities in third world education are computers in walls? Are we really going to dangerously divert funding from rural schools into these schemes? Is this poorly designed research and exaggerated conclusions, from an educational department in a European University, used to justify an approach to education that no parent, even in impoverished countries, would consider for one minute? If Mitra has children, I wonder if he’s allowing them to learn in this way?

Conclusion - a little learning is indeed a dangerous thing
Based on scanty evidence, funded by parties who have a lot to gain then shifted away from hole-in-the-wall to computers-in-schools. Like Slumdog Millionaire, the movie inspired by Mitra’s work, it beggars belief. There’s no silver bullet here and we shouldn’t be lulled into thinking this is the answer. The real danger is that we get carried away by under-researched ‘feelgood’ initiatives. Slumdog Millionaire is typical of the utopian nonsense that can emerge. An overly romanticised, rags to riches, Bollywood Cinderella story that is an assault on probability. Is Mitra’s story also one of ‘Slum chic’? Perhaps the most disgustingly contrived moment of the film is when Jamal says 'You wanted to see the real India' and the US tourist, hands him a $100 note saying ‘Now we'll show you the real America'. This, for me, was reminiscent of the TED Prize.