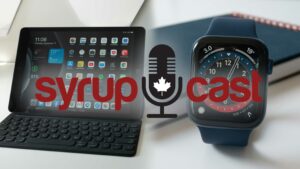 This week on the SyrupCast Patrick, Brad, and Jon breakdown all of the news from Apple’s September hardware event.

First up, it’s difficult not to be shocked by the lack of an iPhone at this pre-recorded keynote. Every September for years, there has been a set of new iPhones, so it’s weird for this month to pass with only Apple Watch and iPad announcements.

Still, the new watches are interesting and offer new choices for consumers. The Series 6 is Apple’s top-of-the-line smartwatch and includes blood oxygen level detection as well as the same always-on display as the Series 5. On the other hand, the Apple Watch SE is more of an entry-level mash-up of the Series 4 and Series 5.

The iPad lineup also got a little more confusing thanks to the new iPad Air that’s more powerful than even Apple’s most recent iPad Pro. It also uses a colourful version of the iPad Pro’s design, further separating the Air from the base-level iPads and doubling down on Apple’s commitment to this middle of the road tablet. Beyond that, there’s a new iPad (2020), which replaces the current base-model version.

Listen in for all of our thoughts about this out of character Apple event.