In this series of posts, I want to write about what I refer to as system's improvement. In this series, it is my intention to first, lay out the basics of what systems are and then share some of the wonderful experiences I have had over the years in a variety of different companies in a variety of different industry segments.  It is my hope that you will achieve meaningful takeaways from this series and that those takeaways will be helpful in the future.  In this series I will write about industry segments such as manufacturing, healthcare, maintenance, etc. for both large and small companies.  Having said this, I will focus on manufacturing systems to drive home key points.

What is a System?
One of the keys to success in any industry is to understand that your company should be viewed and thought of in the context of a system, rather than just a collection of interrelated parts. So, you may be wondering, just what is a system? In its most basic form, a system is a group of interrelated, interdependent, and interacting parts that combine to achieve a specific purpose.  A system takes inputs in some form, acts on them in some way to produce outputs.  In reality, the outputs should have a greater value than the sum total of the inputs.  In other words, the system should add value to these inputs as it works to change them into outputs.
In 2015, [1] Arnold and Wade presented a paper entitled, A Definition of Systems Thinking: A Systems Approach.  In this paper they presented what they referred to as, “The System Test.”  The System Test, as described similarly to Figure 1 below, was devised as a means by which to test a system’s thinking definition.  The test, as presented by Arnold and Wade is relatively simple to follow and understand.  While Arnold’s and Wade’s intention was to use this test to verify the requirements for a system’s thinking definition, my use will be to outline the basic structure of a system and the thinking that goes along with it. As such, I have changed the wording originally presented by Arnold and Wade to describe the three characteristics of a manufacturing system, namely its purpose, the elements within a system and the interconnectedness of the system’s elements. So let's look at each of these three characteristics in more detail. 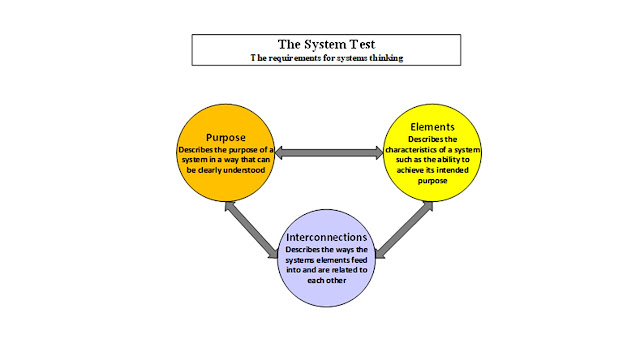 Figure 1
Characteristics of a Manufacturing System
1-   All systems exist to achieve a specific purpose, and one of the keys to understanding a system is to fully understand its intended purpose.  As an example, ask yourself what the purpose of a manufacturing system is. The basic purpose of a manufacturing system is to produce manufactured parts to satisfy customer’s requirements.  If all steps in the process are not functioning as they should, then the purpose will not be achieved.
2-  Every manufacturing system contains multiple elements and has at least one constraining factor that controls the output of the system. If the system’s purpose is to produce a product, then it is critical to locate the constraining factor, exploit it, and then subordinate the other parts of the system to it.
3-  The distinct order in which a manufacturing system is arranged and interconnected affects the performance of the system.  In other words, if the individual steps are not arranged in the correct order, then parts cannot be produced according to specified requirements.
4-  All steps in the process must be present in order for a system to achieve its intended purpose.  If, for example, one step experiences down time, then the system will not function for its intended purpose.
5-  In order for manufacturing systems to maintain stability, there must be a feedback mechanism in place to transmit information.  Without a mechanism to provide feedback, systems will not function to achieve its intended purpose.  Selecting the right performance metrics, for example, is critical for systems to operate effectively.
Understanding a System’s Purpose
To fully understand a manufacturing system, understanding its purpose is critical.  This fact is true whether it’s a separate entity or part of an even larger system.  For most systems the intended purpose is clear, but it is important for everyone interacting within the system to fully understand its purpose.  I say this because it’s important to understand that the output of a system is not the sum total of each of the individual components of the system.
Systems always exist to realize a specific purpose and in reality, the purpose should be viewed as the goal of the system or the objective toward which all effort should be directed.  If we are attempting to improve our current system, then we must do so with our goal in mind.  Improvement implies that change will be required from the system’s current status, but because changes to our system can be either good or bad, we must do so with the ultimate system goal clearly in the forefront.
In my next post, we will consider at a simple example to better understand system's thinking.
References:
[1] Ross D. Arnold and Jon P. Wade, A Definition of Systems Thinking: A Systems Approach, 2015 Conference on Systems Engineering Research
http://focusandleverage.blogspot.com/
focusandleverage
Latest Posts