. First, we will follow the previous task_struct explains task space management structure mm_struct, and a brief introduction to the physical memory and virtual memory related knowledge, about the detailed basic knowledge and concepts can refer to the book CSAPP, here will not do too much elaboration, but default in the understanding of its mapping relationship on the basis of learning. In the following article, we will continue to introduce the management of physical memory and memory mapping in user state and kernel state.

_ Struct management, while task_ There are the following member variables about memory in struct

mm_struct structure is also more complex. We will introduce it step by step. First let's look at the address division of kernel state and user state. This is the highest_vm_end stores the maximum address of the current virtual memory address, while task_size is the size of user status.

in user status, mm_struct has the following member variables

according to these member variables, we can plan the location of each part in the user state, but we also need a structure to describe the attributes of these areas, that is, vm_area_struct

vm_ area_ The specific structure of struct is defined as follows, actually through vm_next and vm_prev is a bi-directional linked list composed of a series of VMS_ area_ Struct is used to express the content of each area allocated by a process in user state.

to a mm_ For struct, there are many VMS_ area_ Struct will be loaded in ELF file, that is, load_elf_binary() is constructed. After parsing the ELF file format, the function will establish memory mapping, mainly including

there are also some structural differences due to the large space gap between 32-bit and 64 bit systems. Here we discuss the structure of the two.

the virtual space in kernel state is irrelevant to the process, that is, after all processes enter the kernel through system call, the virtual address space seen is the same. As shown in the figure below is the distribution of 32-bit kernel virtual space. 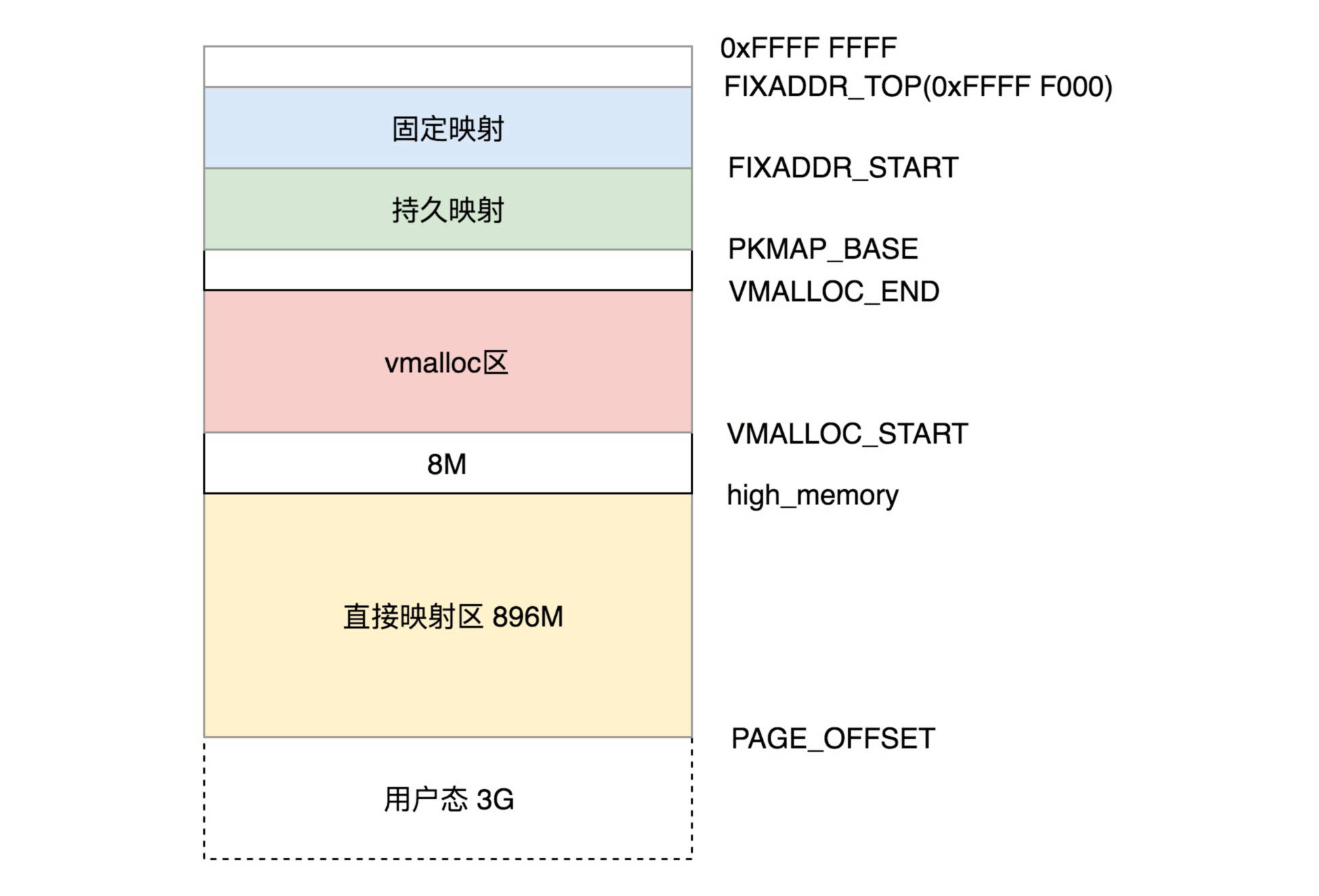 . In this way, the code segment, global variable and BSS of the kernel will also be mapped to the virtual address space after 3G. Specific physical memory layout can be viewed in / proc/iomem, which will be different due to each person's system, configuration, etc.

At VMALLOC_START and vmalloc_ The area between ends is called kernel dynamic mapping space, which corresponds to the memory application of malloc in user state process. In kernel state, vmalloc can be used to apply. Kernel state has separate page table management, which is separate from user state.

PKMAP_BASE to fixaddr_ The space for start is called persistent kernel mapping, and the address range is between 4G-8M and 4G-4M. Using alloc_ When the pages() function is used, the struct page structure is obtained in the high-end memory of the physical memory, and kmap can be called to map it to this area. Because the number of permanent mappings allowed is limited, when high-end memory is no longer needed, the mapping should be unmapped, which can be done through the kunmap() function.

temporary kernel mapping via kmap_atomic and kunmap_ The implementation of atomic is mainly used for operations when writing to physical memory or main memory, such as writing files.

Since the space of     64 bit kernel state is huge, it does not need to be as careful as 32-bit. It directly divides many free areas for protection. The structure is shown in the following figure 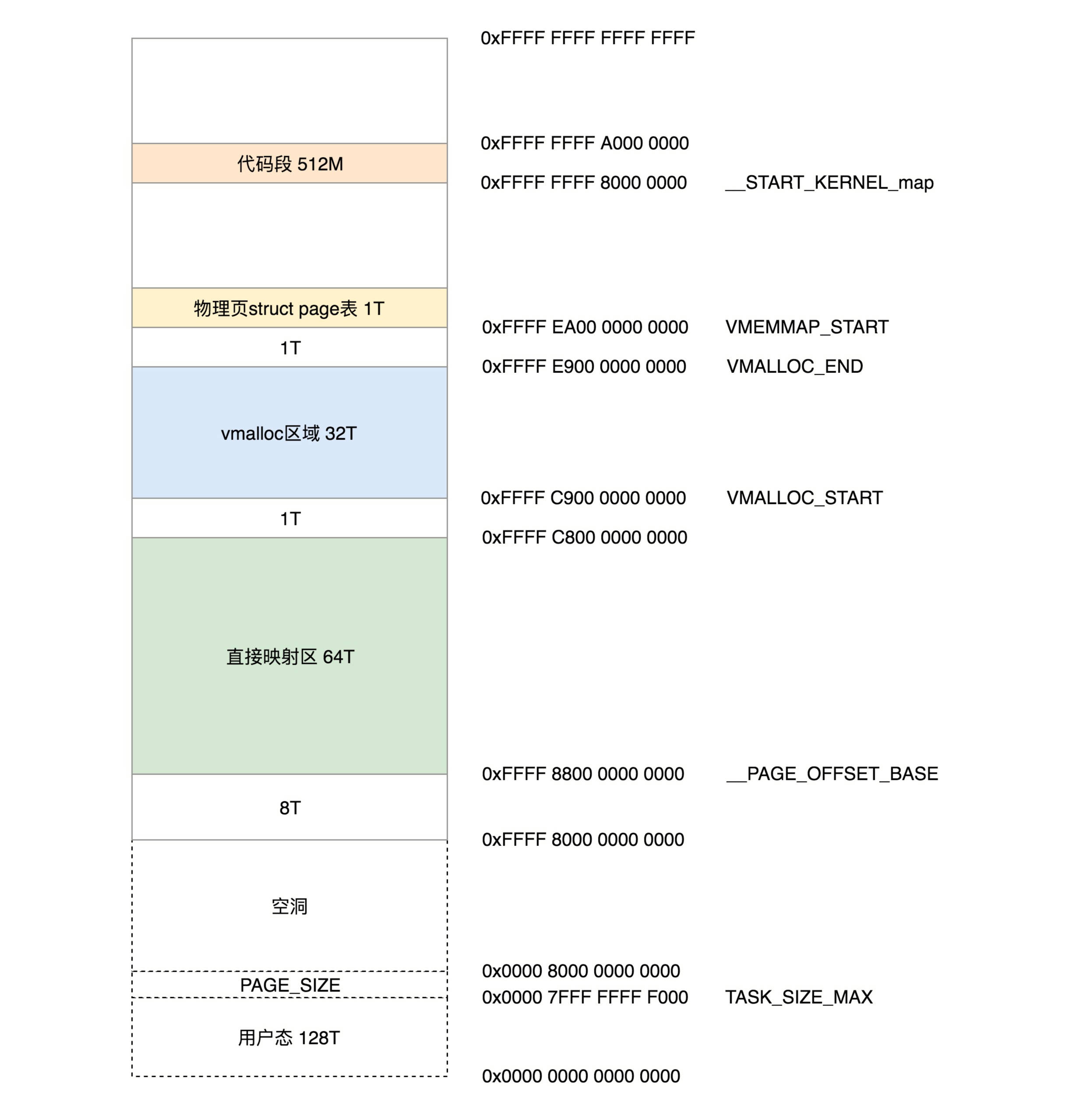 [6] The art of Linux kernel design