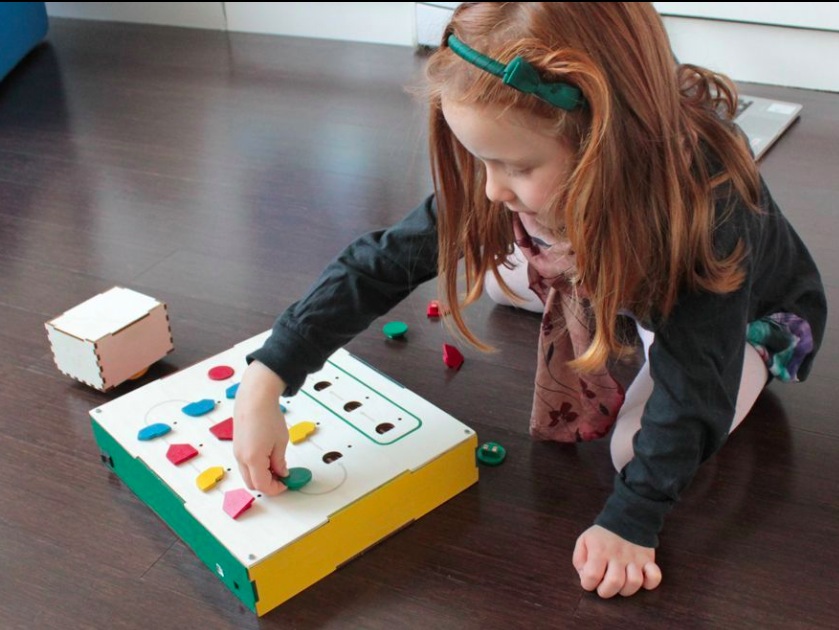 Primo is a play-set that uses shapes, colours and spacial awareness to teach programming logic through a tactile, warm and magical learning experience.

We are proud to announce that Primo is on Kickstarter now and it’s an Arduino At Heart product!

I recently met Matteo Loglio, one of the creators of  Primo,  and  I took the chance to know more about this great game for kids:

Tell us a bit more how Primo was born?

It all started as a student project, when I was doing my master at MAInD in Lugano. There was this course called “Designing Advanced Artifacts” with Massimo Banzi and HABITS studio where each student had to choose a field for his project. My choice was “How can we teach science and technology to children in a playful way?”.

The first thing I did was to visit  a kindergarten, in Chiasso. There I spent a couple days talking with teachers and watching children playing. I was able to gather useful insights that are still very important for the development of Primo. Later I did some desktop research on how the same topic was approached in the past, I discovered “Mindstorms” from Seymour Papert, I think one of the most significant books in this field. That’s how I also discovered Jean Piaget’s early work in the field of cognitive psychology, where Papert took inspiration for his researches.

Any other significant inspirations?

Papert translated his studies in Logo, a graphic computer software that was so innovative that it’s still used in elementary and middle schools. It’s like the father of Scratch, much simpler, but very powerful; the aim of Logo was in fact to enhance the way children face problems and assimilate knowledge. Most of Logo applications are purely on-screen, with some exceptions though, that are called “physical turtles”. I wanted to start from there, with a different target and with the help of new prototyping tools like Arduino. A big challenge was to hide all the technology, screens and any “tech” element from the product. Everything is hidden, to create a “magic” and engaging experience, with no distractions. Children know that everything can happen on a screen, but wooden robots are still a pleasant surprise for them. The rest of the project was quite simple actually, I simplified the Logo concept into three main instructions: forward, left and right, then I also added a “function”, for more advanced levels; the idea is in fact to create levels, with increasing difficulty and challenges. This is a key aspect of Primo, LOGO didn’t have any challenge it’s a pure expressing tools.

How does Primo it work?

There’s this small smiling robot, that we call “cubetto”, that got lost and it has to come back home. The only way to move it, is by giving it the right instructions. The set of instructions are very limited: forward and left or right turn, 90 degrees. They have to be placed in the right order into a board, with an empty “queue” of holes. In this way the children are composing basic algorithms to solve a problem, using just colored wooden blocks, no need for literacy or previous knowledge in computing, keyboards or screens. Basically the teacher (or the parent), places the cubetto and his house on the floor and the child has to figure out one way to bring cubetto home, using just a limited set of elements.

How did Primo became a product?

After the prototyping phase, along with Filippo Yacob of Brain Cube Corp., we decided to turn Primo into a real product, so we funded a company together, primo.io, with the intention of producing Primo industrially and hopefully distribute it to schools world-wide. We soon assembled a team with Josh Valman from MiProto, Lucia Rabago and Beatrice Finauro. Each member bringing his unique set of skills necessary to transform Primo into a real product produced in series. Production represented an entire new set of constraints, from financial to logistical. As a team we had to redesign for the real world. This changes your perception of the product. It was however a benefit that Primo was originally designed in a university setting, with no other focus other than the end user, we wouldn’t have been as happy with the result had we began designing for commercial reasons. 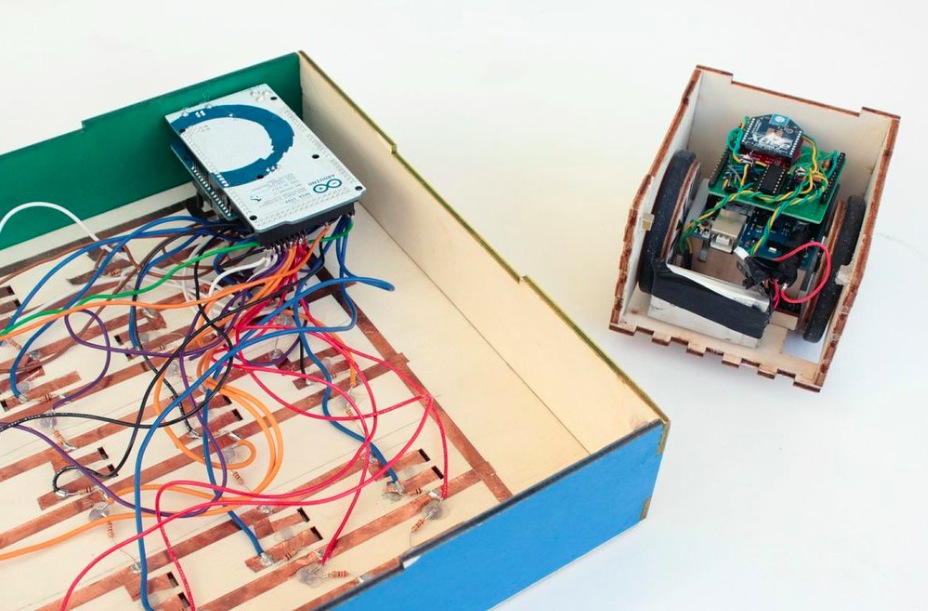 And then you decided to take part to the Arduino At Heart Program, why?

We chose to take part in the initiative for a number of reasons. As a maker-centric company we concentrate on ideating and developing products. Marketing and publicity is a completely different type of activity, and an aspect of business that takes time to develop and execute effectively. Outsourcing this element of business, is normally prohibitively expensive for a small business, or virtually impossible to achieve. Arduino at Heart solves this problem by making their resources available in this field.

Wanting to be “Arduino approved” gave us the desire to improve our processes and products to a quality level that would match the Arduino brand. As a consequence, this makes our product more accessible and user friendly to a community that is already familiar with the technology

From the point of view of interaction design, what are the cool things  about Primo, why is innovative?

I think that from the beginning we tried to develop a tool to learn technology, without showing the complexity behind it. Normally, we say that kids these days grow up with touch screens and computers, so we have to develop on these platforms. This is a safe road to follow, but we took the other one, we wanted to validate our theories, we knew that we could synthesize these concepts in a purely tangible form, without relying on any previously known cognitive interface. We created our own model, specifically crafted for our target. PCs, laptops and tablets were designed for other purposes, we started from scratch. Primo has been tested a lot, around 150 children used it so far, they liked it but we can’t really say how much it can be innovative, until we see children using this extensively and improve their problem solving skills. For this reason we built a company around primo, now we are six people with very different backgrounds. We will be Kickstarter at the beginning of November, to see if other people will support the project, to spread it around schools, houses and keep improving it. 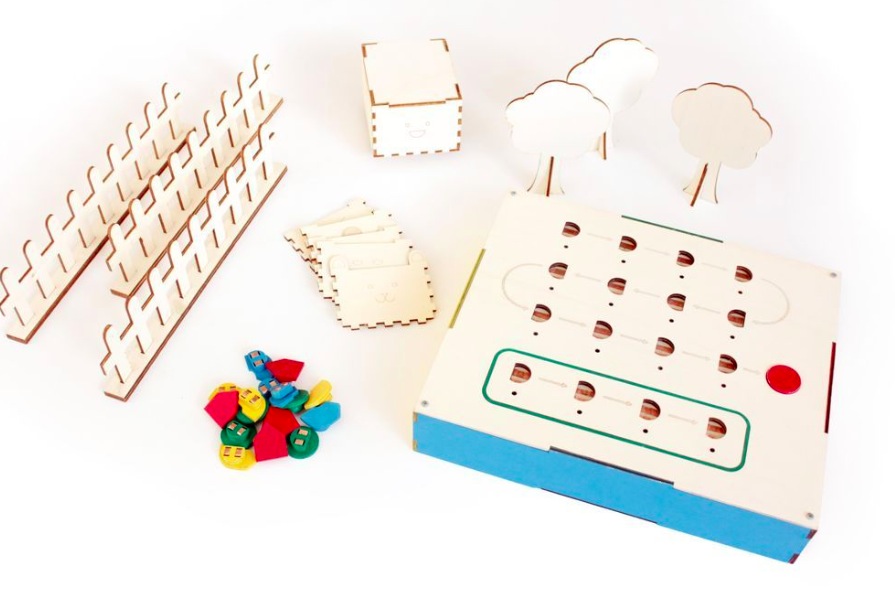 In the last couple of years, a series of initiative focused on kids making things with technology, coding and electronics have been launched all over the world. Why you chose to create something for kids, isn’t it harder and more difficult to start form the young ones?

Maybe it’s a bit more difficult because you can’t interview or study their behavior directly. Of course they are very different from adults, they keep changing and learning new things very fast, so their conceptions and values can change over time. Everything has to be tested, but during tests it’s also easier to see if they don’t like something.

As you say lots of projects are simplifying code access to non technical people, that is great, it’s like in the 80s with computers. We are bringing technology that just a few years ago was unaccessible to the people, with the consequence that more and more users have access to these technologies, musicians, artists, designers and why not, educators.

LaptrinhX
—
Teach programming logic to kids with Primo – Now on Kickstarter!
Share this