Before there was a Yakky Doodle played by Jimmy Weldon on the “Yogi Bear Show,” Hanna-Barbera had a similar duck with a similar voice provided by Red Coffey. The duck appeared with Yogi, Augie Doggie, Snooper and Blabber and even Loopy De Loop, the boring good wolf. The duck was called Iddy Biddy Buddy on Yogi’s early cartoon “Slumber Party Smarty” and in merchandise. Before Iddy, there was a similar duck with a similar voice by Coffey on a handful of Tom and Jerry theatrical cartoons at MGM. The only on-screen voice credit for any of those cartoons was on the Loopy short, and the billing read “Red Coffee.”

Trying to answer the question “Whatever happened to Red Coffey?” has been somewhat maddening. A post on the blog was devoted to the subject awhile ago. A few of Red’s former co-workers chimed in with some valuable information. So I’ve tried again to hunt him down and have finally met with a bit of success.

When we last left Red, he had split from his partnership with singer Jerry Wallace and was on the road in 1960 with “Hellzapoppin’.” Commenters picked up the story and said Red was later in a revue featuring his wife Karen and that his actual last name was Coffman.

Leave us put on our Super Snooper deerstalker cap and stalk down some clues. Trying to find someone with the nickname “Red” isn’t exactly easy. So let’s see if we can find him through his wife.

Red and Karen travelled hither and yon during the ‘60s and early ‘70s. Stories and ads about their appearances bill her as “Karen De Luce.” A check of that name on the web has found a couple of complaints were lodged against her in the mid-‘60s before the American Federation of Musicians for back salary. One reveals her name was actually Dolores Coffman. Aha! A clue! So what happens when we plug that name into the search engine at FamilySearch.org? Elementary school, my dear, Blab. We find ourselves with a Dolores Irene Coffman, who was born in Missouri in 1917 and died in Orange County, California in 1997. Her maiden name was “Luse.” Hmm. “De Luce.” “D. Luse.” Coincidence? Let’s find out.

Gingerly, we type “Dolores Irene Coffman” into a newspaper search engine. And that’s when we come up with this story from the Abiline Reporter-News of April 5, 1965.

COUPLE IN HOSPITAL
Voice of Yogi Bear Hurt In East Abilene Smashup
A one-car smashup in east Abilene injured the voice impersonator of a children’s television show and his wife at 4 a.m. Monday, police reported.
In fair condition at Hendrick Memorial Hospital are Mr. and Mrs. Merl Coffman of Reseda, Calif.
Coffman is the voice for the “Yogi Bear” and “Huckleberry Hound” shows under the stage name of Roy Robert Coffee, 40, said Officer Joe Hicks.
Cotfman complained of pains in the head, chest, pelvis and knee. His wife, Dolores Irene Coffman, 47, suffered cuts on the ankle, hand and wrist, a hospital official said.
The accident occurred as the Coffmans attempted to turn off Interstate 20 onto the U. S. 80 business route into Abilene. They were traveling west. Their 1964 station wagon hit a guard railing and wedged. A heavy duty wrecker was called to pull it loose. The car was a total loss, Hicks said.
Coffman was driving and was trying to find a gas station since he was low on fuel, according to Hicks.
The officer said Coffman told him he was the voice for the children’s shows. A hospital official confirmed this. Hicks added he saw receipts for Coffman’s role in the television shows.
Hicks was assisted in the investigation by Sgt. Dwain Pyburn and Officer Carl Ewell. 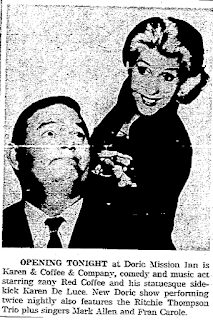 Well, we finally have part of a real name of our proto-Yakky Doodle and a genaeological web search reveals a little bit more.

Merle H. Coffman was born on April 24, 1923 near Arkansas City, Kansas to Homer C. and Ethel Irene (Mitchell) Coffman. He was the youngest of two brothers. His father was a railway brakeman while his mother worked in a dress shop; they died about six weeks apart in 1982. In 1940, the family was living in Cushing, Oklahoma. Merle and Dolores married in Nevada on February 25, 1961. Their revue had various incarnations. It played at the Gold Room in the Golden Nugget in Las Vegas. But it also trudged through small town America; construction hadn’t finished at the 125-seat lounge the 18-member cast was supposed to open in Spencer, Iowa in 1973 but the show went on. The Social Security Death Index reveals Merle H. Coffman died in August 1988. Legacy.com seems to indicate he died August 1st in the U.S. Virgin Islands. Could they have have been entertaining on a cruise ship? Alas, the trail runs cold again.

There’s one other interesting news story about Red. It’s from the Pasadena Independent of March 4, 1960.

Former Deputy Held on Three Drug Counts
A former deputy sheriff was arraigned yesterday in Los Angeles on three counts involving marijuana possession and sale.
Ross H. Moore, 37, taken into custody at his West Covina home after he assertedly sold marijuana to undercover deputies, appeared before Municipal Judge Winthrop Johnson for the brief court proceedings.
His associate, in the alleged violation of the State Health and Safety Code, Merle H. Coffman, 36, was arraigned on single count of possession of marijuana.
Both men were taken into custody last Tuesday at their home at 436 East Michelle St., following an investigation started February 20 by the sheriff’s narcotics detail. Undercover officers purchased marijuana from Moore last February 25, they alleged.
Following the court appearance, the two suspects were returned to County Jail, pending a preliminary hearing March 10. Bail for Moore was set at $15,000. Coffman's bail on the one count was $2,500.
Moore, who served three years as a Los Angeles county deputy, was allowed to resign in 1951 rather than be discharged for excessive use of force on a prisoner.

I haven’t found whether the charge stuck or what happened to the case, but evidently it didn’t affect Coffey’s career as he toured with “Hellzapoppin’” later in the year. 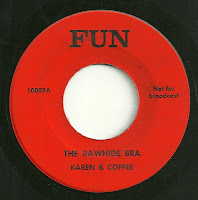 Karen and Coffee cut a novelty 45 that wound up on a couple of private labels; we can only presume they sold it at venues after each of their sets wrapped up. But ol’ Red also worked out a legitimate record deal. In November 1959, the Warner Bros. label released a novelty Christmas song by Coffey, as Red Coffee, called “Ducky Christmas.” Billboard called it an attempt to take advantage of the Chipmunks’ popularity, though none of the voices are sped up. Here is it, for you fans of Hanna-Barbera duck voices.

LaptrinhX
—
The Continuing Hunt for Red Coffey
Share this