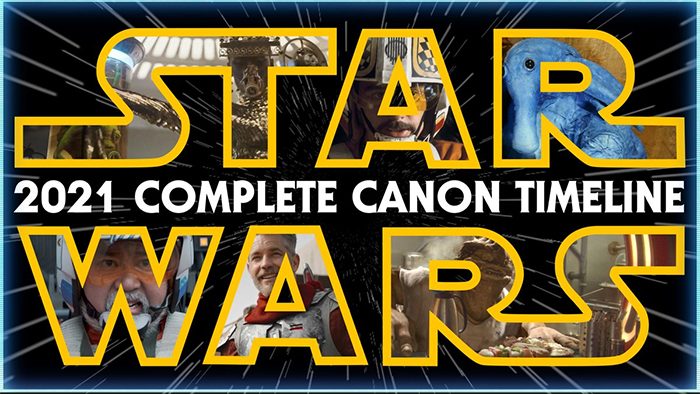 The Morning Watch is a recurring feature that highlights a handful of noteworthy videos from around the web. They could be video essays, fanmade productions, featurettes, short films, hilarious sketches, or just anything that has to do with our favorite movies and TV shows.

In this Star Wars Day edition, find out everything you’ve missed recently in the Star Wars universe with an updated canon timeline, including all the movies, TV shows, books, comics, and more. Plus, watch Boba Fett’s return in the second season of The Mandalorian recreated in stop-motion animated LEGO form. And finally, a new edition Disney+’s The Deets dives into Star Wars: A New Hope for some fun facts about the franchise starter.

First up, Star Wars Explained has returned with their annual update of the canonincal Star Wars timeline. In the above video, find out everything you need to know about what’s happened in the Star Wars universe through May 3, 2021. It even includes the latest updates from the books and comics of The High Republic, the final season of The Clone Wars, and the new season of The Mandalorian.

Next up, now that Boba Fett has returned in the second season of The Mandalorian, and will soon have his own spin-off series called The Book of Boba Fett later this year, check out the bounty hunter’s triumphant return in a different way. Brick FORCE Studios created this stop-motion animated version of Boba Fett’s fight against a squad of Stormtroopers.

Finally, Disney+’s ongoing web series The Deets takes a dive into Star Wars: A New Hope. A lot of these fun facts won’t be new to longtime Star Wars fans who know every bit of trivia there is, but younger fans out there may not be privy to such details, and there are always new fans who need to be educated in the ways of The Force.