Razer makes some of the highest quality and best-looking gaming laptops on the market. The matte black finish and clean, straight lines of the company’s Blade laptop series exude a subtle, mysterious look — almost as if they’re saying “You want to see power? I’ll show you power.” We’ve called the Blade laptops the “MacBook Pro of Gaming” before, and you know what? They are. Right down to the $4,000+ price tag, especially if they come with covetable features like a 300 Hz refresh rate and per-key RGB lighting. But if I’m spending that much money on a laptop, it better be near-perfect. While fantastic, the Razer Blade Pro 17 has a few trouble spots, and thermals are at the top of my concerns.

Compared to one Razer Blade 15 Advanced model, you’re paying the same price for almost the same specs. Both come with an Intel Core i7-10875H CPU, with 16 GB RAM, a 512 GB SSD, and a full HD 300 Hz display. The difference is the 17-inch has a much larger display and a less powerful GPU. The Blade 15 Advanced technically comes with a better GPU — an RTX 2070 Super Max-Q instead of the RTX 2070 Max-Q in the Blade Pro 17. However, the differences in frame rate usually don’t differ that much, depending on the game. Max-Q GPUs generate lower frame rates to begin with since some power gets sacrificed for a slimmer chassis, but there are distinct differences in performance between the Blade Pro 17 and Blade 15 Advanced. 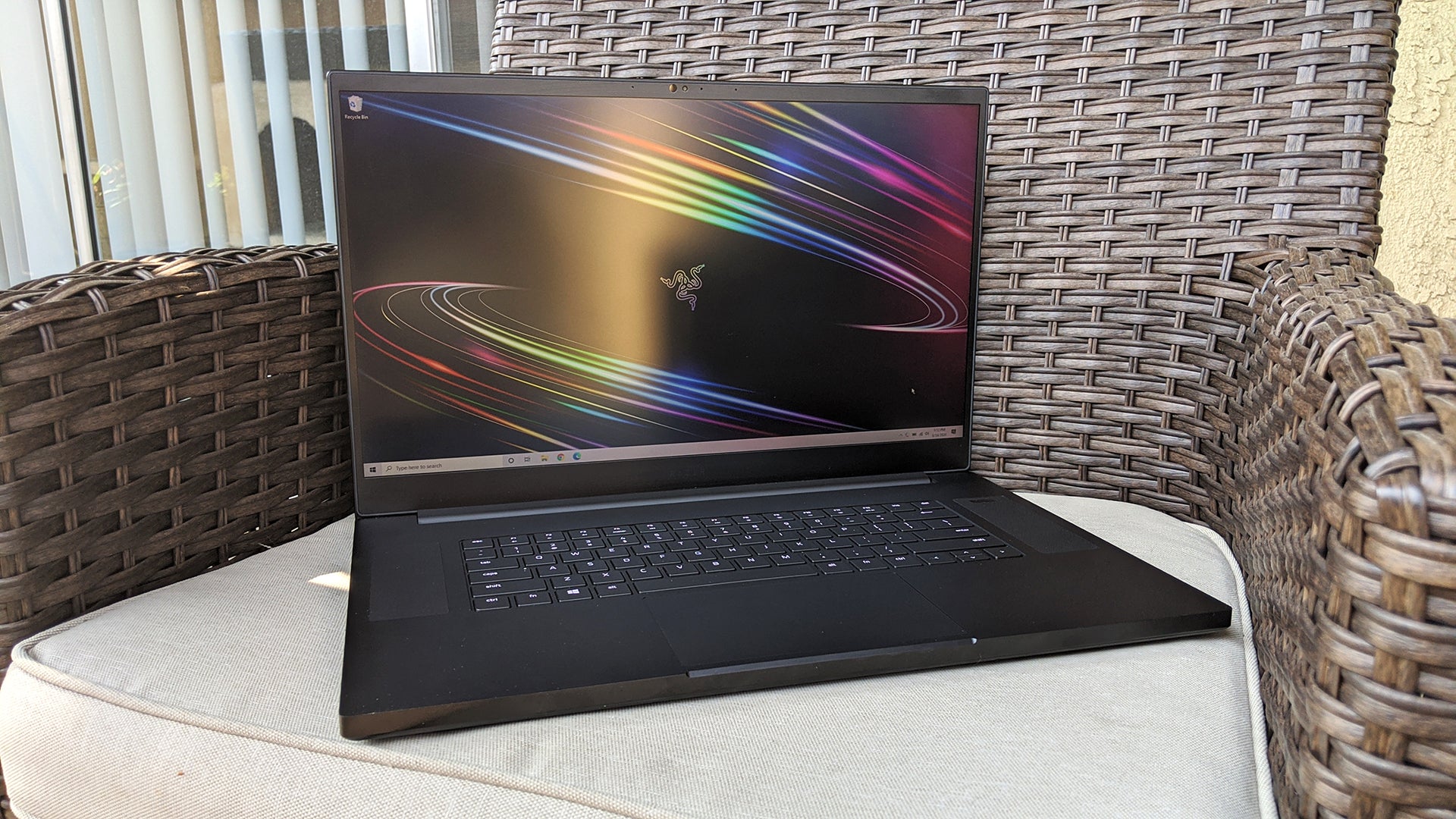 If you’re looking for something that is decently speedy with video encoding and rendering tasks, the Blade 15 Advanced is slightly faster thanks to the Super-variant GPU. Rendering a 3D image in Blender with the GPU, the Blade Pro 17 was just 19 seconds slower than the Blade 15 Advanced, 8:19 verses 8:00, respectively.

With the fans running on high (this is important, as you’ll see in a bit), the Blade Pro 17 averaged the following frames per second in our spread of game benchmarks, all at 1080p, 60 Hz on ultra (or highest graphical settings): Shadow of the Tomb Raider, 91; Far Cry 5, 84; Total War: Warhammer II, 83; Metro Exodus ray tracing off, 57; and Metro Exodus ray tracing on, 48. Shadow of the Tomb Raider on the Blade 15 Advanced, on the other hand, averaged 102 fps, while Far Cry 5 was 100 fps. That’s could be a pretty significant difference for you, and its why, at the same price, you can get the 15-inch model with a better GPU.

But the Blade Pro 17 also has better port options: a 2.5Gb Ethernet port and three USB 3.2 Gen 2 ports instead of just two, and like the 15 Advanced, the Blade Pro 17 also has one USB-C 3.2 Gen 2 port and one Thunderbolt 3 (USB-C) port. There’s also an HDMI output and an SD card reader. As someone who does photography as a hobby, I always appreciate when laptops include an SD card reader, and with the ubiquity of USB-C, that’s increasingly becoming less common. But it’s so convenient not to have to buy an external card reader! Plus that Ethernet port helps to download games faster, makes it easier to troubleshoot my internet connection, and is just a lot more stable when I need it to be. It’s nice that like Lenovo, Razer is recognising its possible to have a slim chassis and still include an Ethernet port. But the presence of an Ethernet port also makes it clear this is a laptop not intended for your lap.

The heat this thing gives off just reinforced the clear intended use on a desk. While the chassis does get warm, it stays comfortable enough. You might want to have a fan blowing on your hands, depending on your own heat tolerance or ambient room temp, but be mindful of the section above the keyboard. It can get as hot as 51 °C, or 124 °F, while playing resource-hogging games, especially at the highest settings. There are no keys or buttons in that section, so there’s no reason for anyone to touch that area on purpose, but be careful anyway. That section stays cool while using the laptop for any other task though, so at least there’s that. I still wouldn’t put it on my lap regardless of what I was using it for.

The chassis getting that hot in any section at all is usually a sign that one or more internal components are sweltering — and the Intel Core i7-10875H in this Blade Pro 17 reached a max temperature of 98 °C while under full load, according to HWInfo. The same program also detected thermal throttling on almost all cores at various points, but the CPU was able to hit a max frequency of 4.88 GHz. The throttling wasn’t detectable while playing games, but this CPU has a max operating temperature ‎100 °C so it’s concerning that it nearly reaches it. That means if you want more power you’re going to either need to try a gimmicky aftermarket cooler (which might have limited success) or go for a bigger, thicker laptop that won’t face the same thermal challenges. I’d recommend a fully tricked out Blade 15 Advanced, or the new Acer Predator Triton 500 instead. The MSI GS66 Stealth is good too.

Whats more is that Windows 10 only has one power setting for the Razer Pro 17: balanced. You can get into the advanced power settings for the CPU specifically, but there’s only an Active and Passive mode for when the laptop is either plugged in or running on battery life; Active mode means the system will kick the fans on before it slows down the CPU, and Passive mode means the system will slow down the CPU before kicking the fans on. You will need to set the fan speed in Razer’s pre-installed launcher, but even with the fan speed on high the max temp dropped down to only 95 °C, while the chassis temps remained the same. Lowering the ambient room temp can help with that, however. Air conditioner roaring to a chill 21 °C, the top part of the chassis dropped to 48 °C.

I’ve tested a few gaming laptops now with Intel’s 10th-gen processors, and it appears the high temps and throttling are common for the i7-10875H. The Gigabyte Aorus 17G had some questionable temps, but the Acer Predator Triton 500, Lenovo IdeaPad Gaming 3, and MSI GS66 Stealth, which had an Intel Core i7-10750H instead, did not. Our previous review of the Blade 15 Advanced also cited thermals as a concern.

If you’re willing to sacrifice some performance for a larger screen, the Blade Pro 17 might be a better choice over the Blade 15 Advance, but the thermals are more of a concern for me with the Pro 17. The Ethernet port is a nice touch, sure, but I’d forgo that in a heartbeat if it meant cooler CPU and chassis temps. For price identical to the Razer Blade 15 Advance, the Blade Pro 17 doesn’t have the sharpest edge.

The post The Razer Blade Pro 17 Is a Great Gaming Laptop But I’m Struggling to Be Impressed appeared first on Gizmodo Australia.