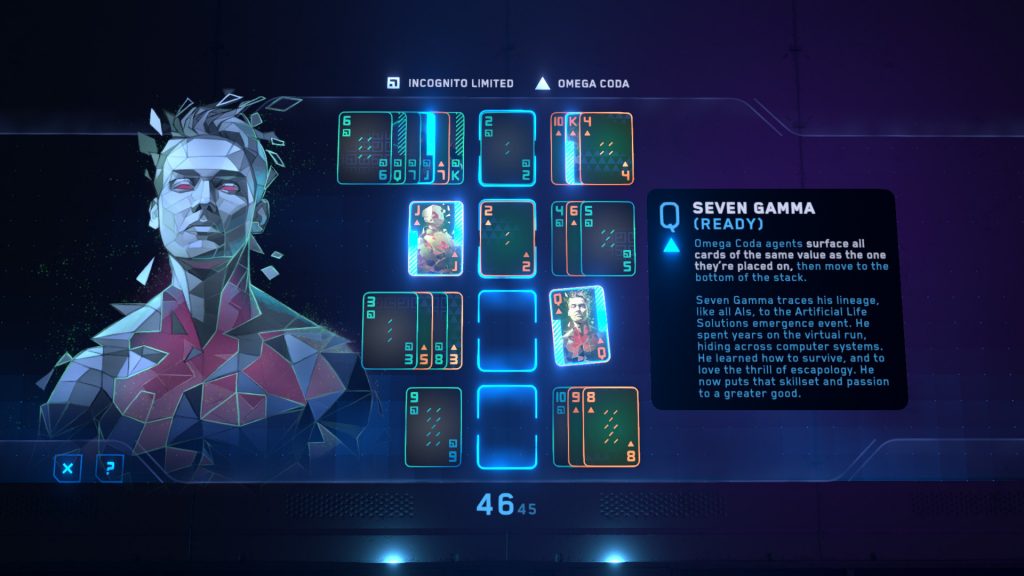 Since playing Thomas Was Alone on PS Vita seven years ago, I have always looked forward to the next Mike Bithell game. This is especially true if that release is under the “Bithell Short” banner which includes short, two to three-hour experiences like Subsurface Circular and Quarantine Circular. Bithell’s newest, The Solitaire Conspiracy, is the latest from this line and presents the same quality content you would expect from the lauded developer, albeit not for the reason you would expect.

“Bithell’s newest, The Solitaire Conspiracy, is the latest from this line and presents the same quality content you would expect from the lauded developer, albeit not for the reason you would expect.”

From my experience with Bithell’s games, like Thomas Was Alone and Subsurface Circular, the focus is typically on storytelling. The writing is always witty and smart while presenting a well-told story. The Solitaire Conspiracy does tell an interesting tale using a card game, which is impressive given the constraints it has as opposed to a text adventure like Quarantine Circular, but I was never truly captivated by the story being told.

In The Solitaire Conspiracy, the spy agency known as Protego is destroyed, leaving its spy crews without direction. How this has happened is a bit unknown, but Protego’s Jim Ratio, played by Kinda Funny’s Greg Miller, tells you it’s a bad man named Solitaire. Ratio has selected you to rebuild Protego back to its former self and stop Solitaire.

To do that, you play a modified version of the classic card game, Solitaire.

It is a bit weird at first, but the card game fits within the game’s world, and it all makes sense by the end of the three-hour story. However, the narrative itself just didn’t interest me nearly as much as previous Bithell projects. A lot of that has to do with how it is presented. 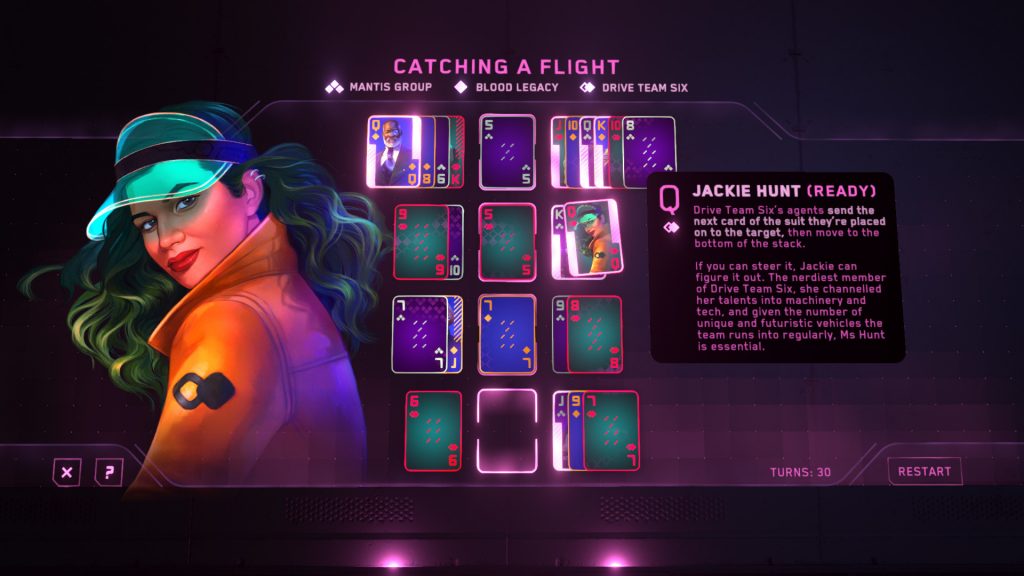 Most of The Solitaire Conspiracy’s story is presented by Jim Ratio on a futuristic-looking computer monitor. Greg really does a good job in his role as Ratio. However, having watched legitimately hundreds of hours of Kinda Funny and IGN videos featuring Greg, it was really hard for me to separate his real-world self from the character he is playing. It wasn’t until halfway through the campaign where it felt like this started to fade and wasn’t just seeing him as himself any longer. Again, Greg does a great job, but it was just really hard for me not to see him as Greg Miller of Kinda Funny and instead see Jim Ratio of Protego.

In a more minor way, The Solitaire Conspiracy’s story is told within mission objectives. In the campaign, you level up by completing a mission. Each mission has an objective, predetermined crews, and a set amount of experience. As you progress through the campaign, you’ll be able to choose between three different missions, with each usually having different amounts of experience to gain.

These objectives usually tell you about Solitaire’s plans, and how each of the crews will infiltrate and disrupt said plans. As the “Spymaster,” you are in control of these crews, coordinating each infiltration by playing a card game. It is neat how it connects the solitaire-inspired card game to its sci-fi world, but there is definitely a disconnect there. 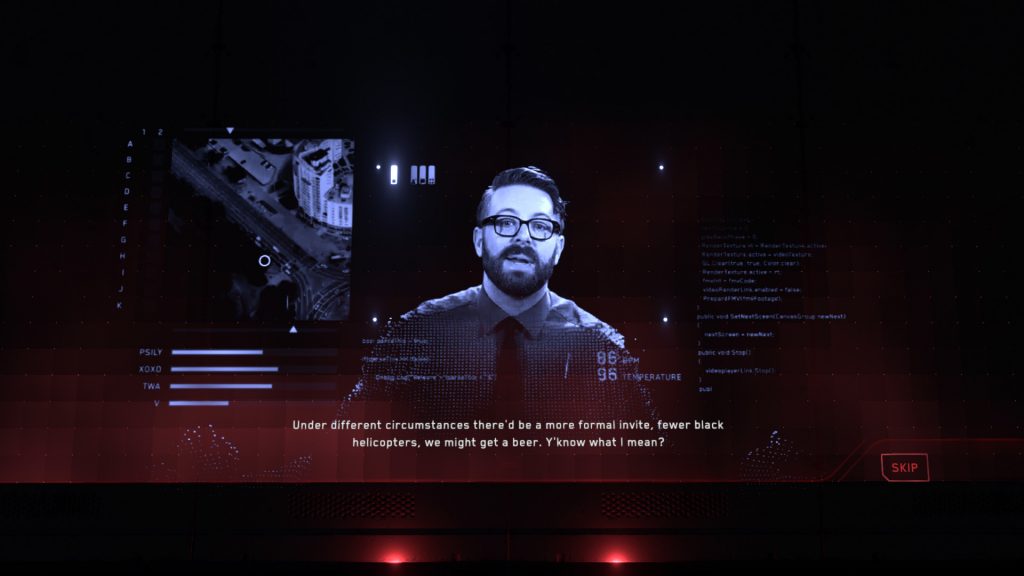 For example, a mission objective might say something like, “Solitaire has a recon base; use your crew to infiltrate the location and find intel.” That sounds pretty action-packed, right? But then you are brought to a pretty chill card game, which is technically you, the “Spymaster,” coordinating this attack on Solitaire. Even though it all feels right within the game’s world, it is just a bit hard to connect the game’s objectives and the card game together.

“However, the narrative itself just didn’t interest me nearly as much as previous Bithell projects. A lot of that has to do with how it is presented.”

By the end of The Solitaire Conspiracy’s campaign, I just never felt invested in the story that was being told. It just feels like a roller coaster ride. I’m along for the ride, but I am not doing anything that really feels like it affects what happens in the story. That doesn’t mean it’s not fun, though.

The Solitaire Conspiracy’s version of solitaire is actually quite easy. There are up to four suits (or crews) in a deck, and you have to stack each crew in numerical order from ace (considered 1) to king. Once the stacks are complete, you win the game. That basically sounds like plain jane solitaire, but it does have its own unique quirks that makes it very fun and approachable to play.

One of these quirks is to allow you to put lower value cards under any card that is of higher value, no matter what suit it falls under. For example, if you have a card valued at 2, you do not need to put it on top of a different colored 3; it can go on top of any card valued higher than a 2. 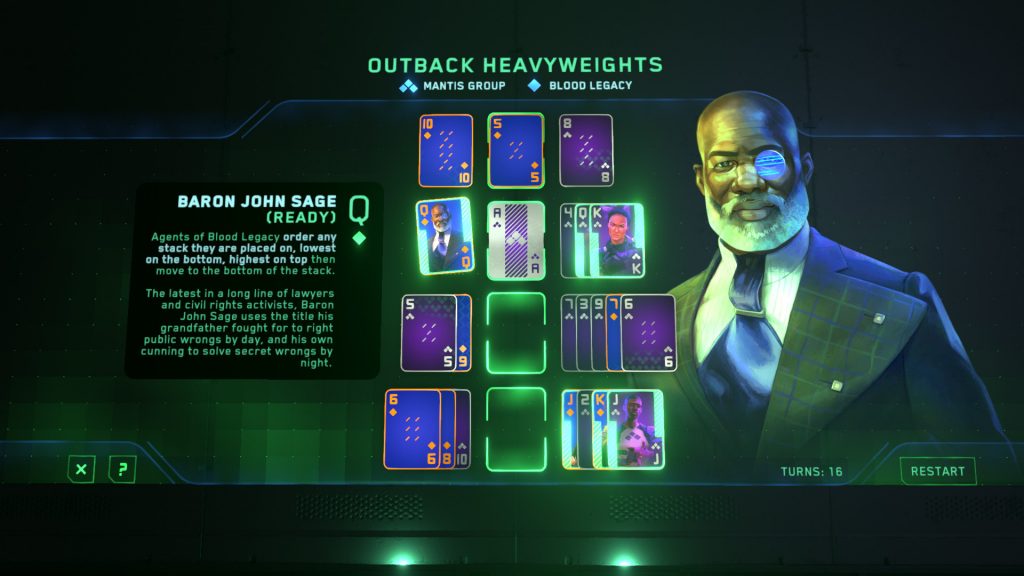 Each suit, which is presented as different spy crews, has its own unique abilities. These abilities become available as soon as you begin a stack with that crew’s ace. To execute those abilities, you simply place that crew’s face card on top of any row. Those abilities include “exploding” a row which randomly distributes those cards to other rows, organizing a row from lowest value to highest value, and sending the next card you need in a specific crew’s stack to the bottom of a row. There are a total of eight of these abilities, each can be a benefit or detriment depending on how you use it.

Let’s look at that last ability I listed: “Sending the next card you need in a specific crew’s stack to the bottom of a row.” On the surface, that seems like a terrible ability to have. In some cases, it really is a detriment to your board. However, with some thought, it can be incredibly beneficial.

“With The Solitaire Conspiracy being a card game, it has way more replayability than any Bithell Short so far.”

For example, let’s say I put down the ace for the crew with that ability. That seemingly detrimental ability can now be activated. The next card I want is another ace to start another stack, but it is at the very bottom of a six-card long row. However, if you use this ability on that ace’s designated suit in a row that only contains one card, that ace you were trying to grab becomes significantly easier to do so.

The crew abilities bring a much-needed strategy to this fairly simple game. Sure, it lacks the challenge even normal solitaire brings, but clearing a board feels just as satisfying.

The previous games under the “Bithell Short” banner had a bit of replay value, but I never imagined myself playing either Subsurface Circular or Quarantine Circular more than two or three times. With The Solitaire Conspiracy being a card game, it has way more replayability than any Bithell Short so far.

Along with the campaign mode, there are Skirmish and Countdown modes. Skirmish allows you to pick up to four crews, and play a round of Bithell’s modified solitaire at your own pace; it is essentially like the campaign mode but without the leveling and predetermined crews. It’s fun, but it feels more like a practice mode for Countdown. 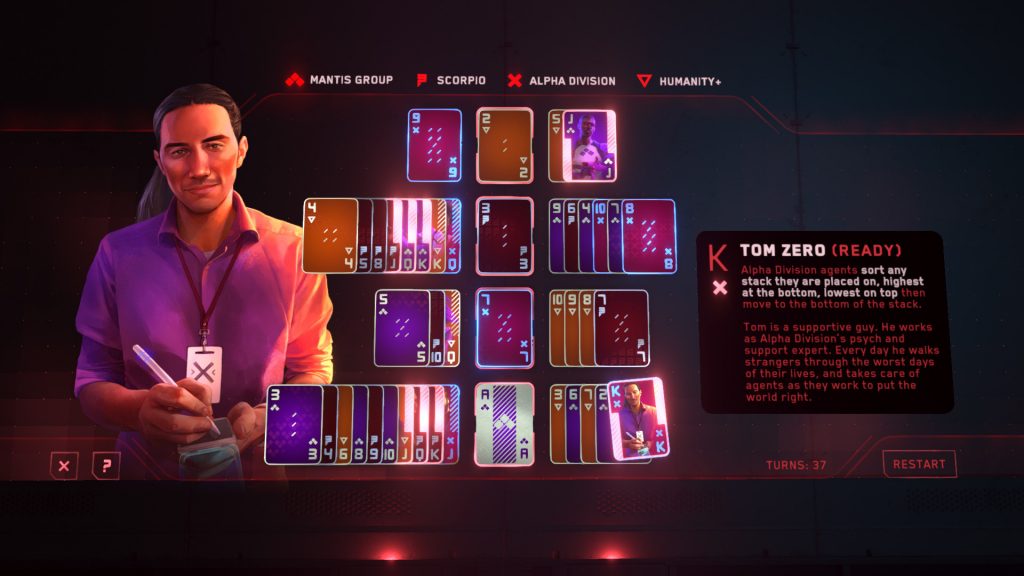 “The Solitaire Conspiracy may not be the developer’s best-told story, but it’s one of the most enjoyable on a gameplay level.”

Countdown is a survival-style version of the game. You are presented with waves that increase in difficulty as you complete them. Every time you add a card to a stack, you add more seconds to your timer. However, once the timer runs out, your run is over.

Adding that timer exponentially increases the “difficulty” of the game. It’s not actually harder, but you have to think much more quickly than the chill version of the game you play in Skirmish and campaign. With the inclusion of a leaderboard, The Solitaire Conspiracy has so much replayability.

The crew at Bithell Games has done it again. The Solitaire Conspiracy may not be the developer’s best-told story, but it’s one of the most enjoyable on a gameplay level. And like every Bithell Short, it never overstays its welcome. If you want to play something short and sweet, look no further.

The post The Solitaire Conspiracy Review — If The Cards Are Cold, Dont Go Folding by Michael Ruiz appeared first on DualShockers.

LaptrinhX
—
The Solitaire Conspiracy Review — If The Cards Are Cold, Dont Go Folding
Share this