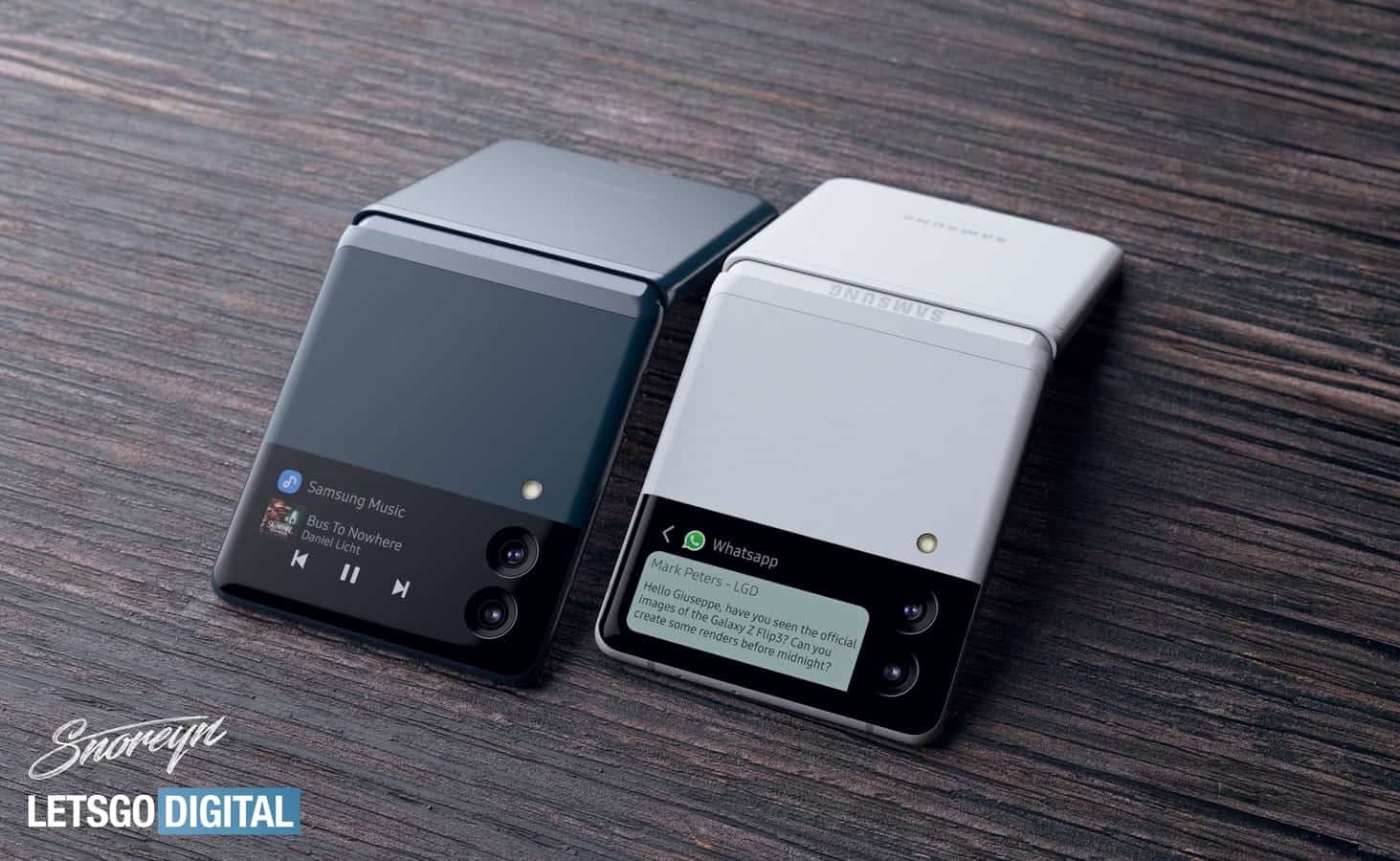 Both the Samsung Galaxy Z Fold 3 and Z Flip 3 have leaked yesterday. Their design has been shown, and now the Galaxy Z Flip 3 got recreated by Giuseppe Spinelli, and shared via Letsgodigital. The renders you can check out below the article are based on the leaked images. So, chances are they are quite close to the real thing.

The Galaxy Z Flip 3 gets shown in several renders, which are based on leaked images

With the Galaxy Z Flip 3, Samsung will utilize a two-tone design on the back. This actually reminds us of some Google Pixel phones, and it looks quite nice. Inside the black bar at the top, Samsung will include two cameras, and a cover display.

Its main display was not shown in leaked images, but we’re presuming that an under-display camera won’t be a part of this phone’s design. It will be included under the main display of the Galaxy Z Fold 3, though.

Both the Galaxy Z Fold 3 and Z Flip 3 are said to include improved glass protection on the front. The hinge looks quite similar to last year’s, at least from the outside. That doesn’t mean Samsung won’t improve it, though. Even if that doesn’t happen, last year’s was excellent.

The device will launch in eight color options

The Galaxy Z Flip 3 will arrive in eight color variants, according to well-known sources. Not all color options will be available in all markets, though, of course. Four of them will be available globally, while others may be exclusive to some markets.

The Samsung Galaxy Z Flip 3 will launch in Beige, Black, Dark Blue, Gray, Green, Light Pink, Light Violet, and White color variants. You can see a couple of those in the provided images below.

The phone is expected to feature two 12-megapixel cameras on the back. One wide-angle unit, and an ultra-wide angle camera. A 10-megapixel camera will probably be included on the front, on both displays.

The Galaxy Z Flip 3 probably won’t support the S Pen, but the Galaxy Z Fold 3 will. Samsung will introduce a special version of the S Pen for the device. You won’t be able to dock it without a case, though.

Both of these phones are rumored to arrive in July. They will probably launch at the same time. The post These Galaxy Z Flip 3 Renders Are Based On Leaked Images appeared first on Android Headlines.