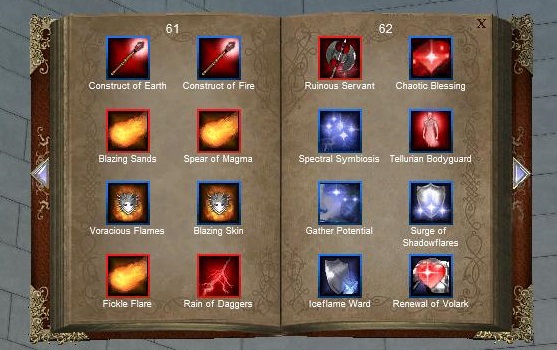 Something that was mentioned in passing during the Pantheon stream about the tendency of newer MMOs to over-reward struck a chord with me. Casting my mind back to the early days of EverQuest, two of the most motivating aspects of the pacing were the five level gaps between spell upgrades for casters and the relatively sparse, partially random chance of acquiring better armor and weapons.

Given that even the lowest levels seemed to take a very long time, waiting five levels for every new set of spells could be frustrating. The significant upside was that impact those new spells had when you did get them was immense, even game-changing.

The acquisition of a new pet could transform the gameplay of a Magician or a Necromancer out of all recognition. With the arrival of each set of spells, things that had been out of reach would become, if not easy, then entirely possible.

Your character might suddenly be able to breathe underwater or fly (okay, levitate). Leveling up didn't merely mean a percentage increase to DPS and some more hit points - it meant you could do new things, almost as though you were suddenly playing a new class.

Similarly a single, fortuitous drop from a Named mob could raise your character's game substantially. Acquiring a weapon that procced Snare or Fear might allow your character to kite mobs and thereby solo when previously she'd needed a partner or a group to do anything much at all.


At the time, though, this didn't necessarily seem like such a great trade-off. Oh, it was wonderful when it happened, but for every bonanza level ending in zero or five there were several levels of increasingly arduous diminishing returns, where each session could seem like a struggle and a Ding! could end up leaving you feel weaker not stronger. For every life-changing drop there might be countless disappointments as camps dragged on, Nameds failed to spawn and rare drops eluded the RNG.

When EverQuest moved to giving new spells every level instead of every five I was initially wary. It seemed as though something would be lost. At the lower end of the level range, to some degree at least, that turned out to be true. In general, though, the pace of that particular MMO was so stately that a single level provided plenty of time to come to terms with each set of new abilities before the next appeared.

Also, casters in EQ get a lot of spells. The amount you would get all in one go after five levels could be overwhelming. Even spread out there were always enough to go around, something that never changed even when the level range eventually stretched to three figures.

When my Magician dinged 90 last week she went on a spell-buying spree. The scrolls she needed to buy ran into double figures. Of those almost none were upgrades to existing spells. Most were new abilities entirely. It was an entertaining and satisfying session. 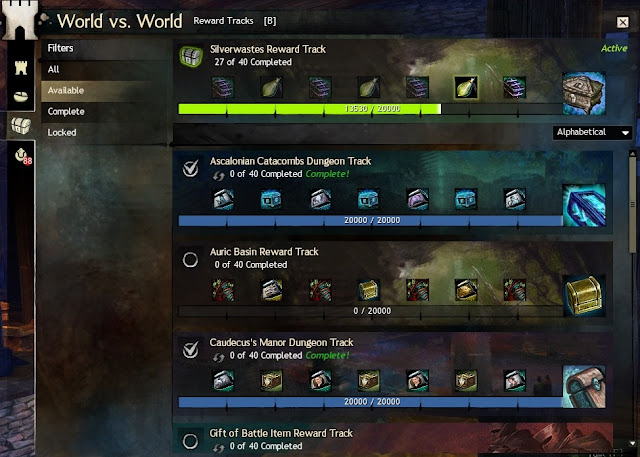 In time I came to prefer the "every level" approach. I definitely wouldn't revert to a five level spread. It's nice to have something to look forward to every level and since levels don't exactly fly by the sense of anticipation is retained. That's not something I can say for GW2, where "Reward Tracks" were recently added to World vs World.

Reward Tracks have existed in Structured PvP for a long time as a means of providing players who don't do PvE with most of what they would get if they did. Whether it's a good idea or not to attach the rewards from one part of the game to the gameplay from another is a question I don't propose to debate right now. That decision having been made, however, I do take issue with the implementation.

Rather than add any sense of excitement, anticipation or satisfaction, mostly what the coming of Reward Tracks to WvW has brought for me is irritation and inconvenience. GW2 is already infamous for showering players with an endless rain of bags and boxes to be opened, many of which contain yet  further boxes and bags. The Reward Tracks follow that pattern almost to the point of parody.

As I ran with the zerg my limited inventory space was already constantly filling up with loose pieces of white, blue and green quality weapons and armor, the main function of which is to be salvaged and sold on the Trading Post. Along with spikes and similar items intended only to be sold to NPC vendors for a few copper and the mats from the deconstruction of the said items, plus the bags filled with the salt tears of our  foes (not literally, sadly; just more mats) space runs out fast.

Now, to that monsoon of convertible currency, we have to add box after box of "Rewards" from dungeons or PvE maps that, you might imagine, were I to want, I would be doing instead of what I actually am doing. All of those have to be opened and dealt with, either in the odd hiatus as we cata down a recalcitrant fortification or enjoy a rare two-minute drinks break, or else at the end of the session.

Often it takes me fifteen or twenty minutes to clear my bags. More. An activity I used to look forward to as a treat, it long ago lost its allure and now threatens to become a chore I resent.

So, there's a balance to be achieved between a satisfying flow of meaningful rewards and an endless drip-feed of things you don't want but can't bring yourself to destroy. Modern day EverQuest still hits that balance, just about, although I notice even there that I spend more time clearing and re-clearing my bags than I used to do.

Whether contemporary players would ever be content with a "less is more" approach, though, I am not so sure. I imagine my objections to the Reward Tracks in WvW would put me in a very small minority of dissatisfied players. Most would probably want the rewards to come faster even than they do, whereas I'd rather see them removed completely.

Pantheon probably isn't attempting to reach the average contemporary player let alone the average GW2 player, so the benchmarks it will need to hit may be very different. Still, getting to that sweet spot, where satisfaction and frustration balance each other out, won't be easy. The ideal would be to make every reward welcome, even thrilling, yet still have them appear with a periodicity that isn't off-putting.

I'm not sure if that's achievable but it's definitely something worth shooting for.
bhagpuss everquest gw2 levels. loot mmo pacing pantheon spells
Latest Posts

LaptrinhX
—
Too Much, Too Soon : EverQuest, GW2, Pantheon
Share this