I doubt that many native speakers of American English will recognize this word:

But with a little more context, more people will get the message:

And if we play the whole pause group, it becomes obvious:

The clip comes from Terry Gross's 10/22/2015 interview with Sarah Silverman, at about 12:13 of the download, and of course the transcript is

The OED gives /ˈdɪdn(t)/ as the US pronunciation of the word "didn't", with this online sound clip:

That pronunciation actually has six clear phonetic segments in it (more if we divide stop closures and releases): 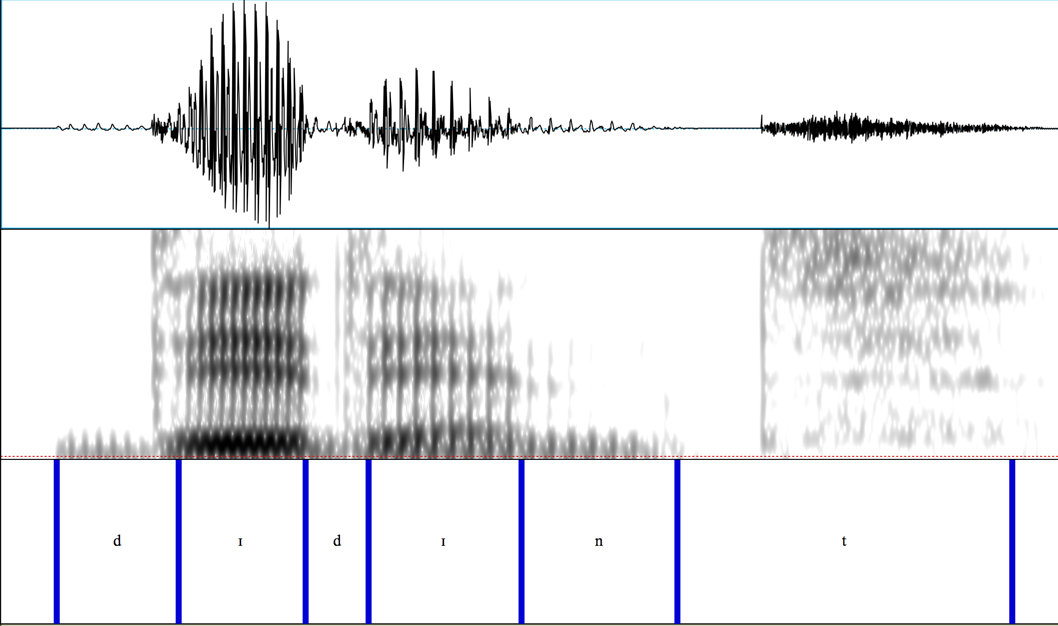 And the IPA form of Sarah Silverman's pronunciation is [dɪn], not [dɪdn̩t] or [dɪdn̩] (supposing that the OED's 'n' is meant to be syllabic): 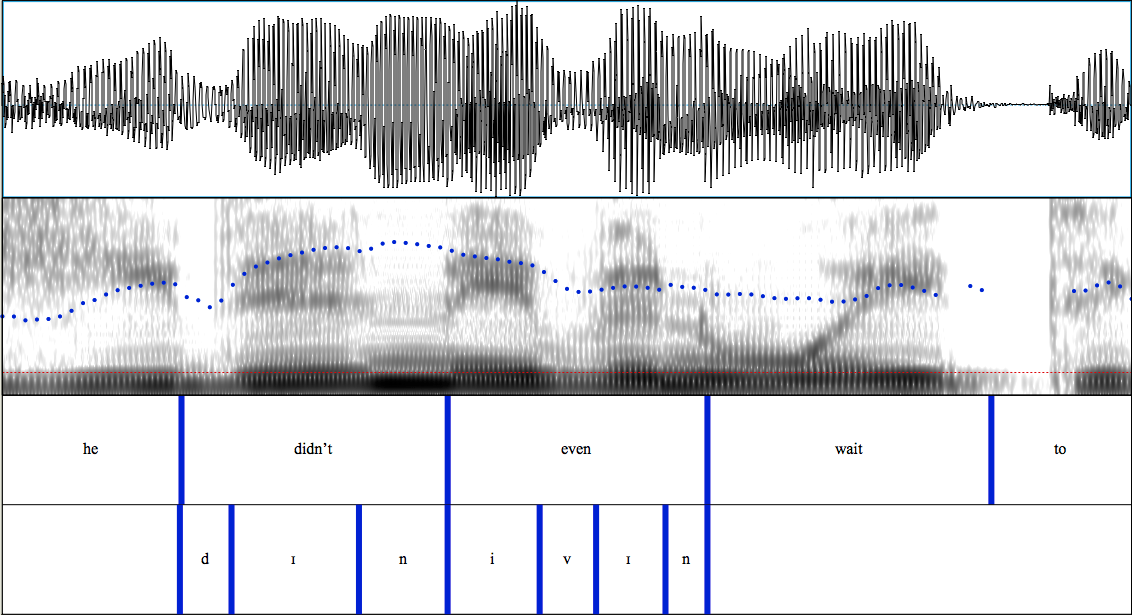 not true — didn't even mention Buffy is Fluffy in the book 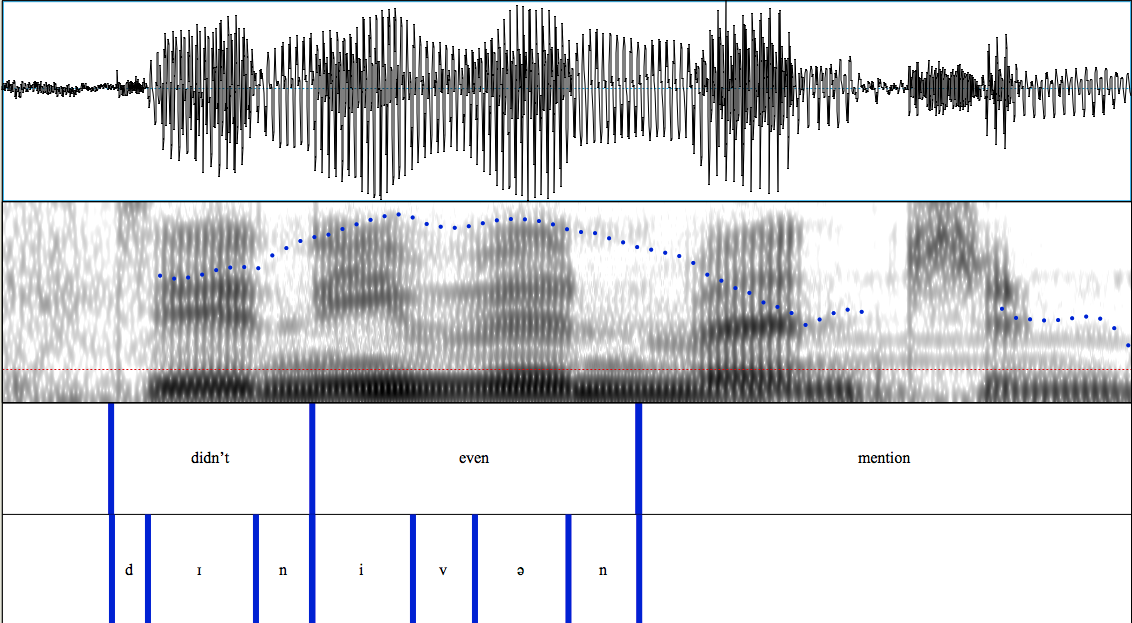 On the other hand, "didn't" isn't always reduced to that point — here's Terry Gross at about 9:51 of that same interview: 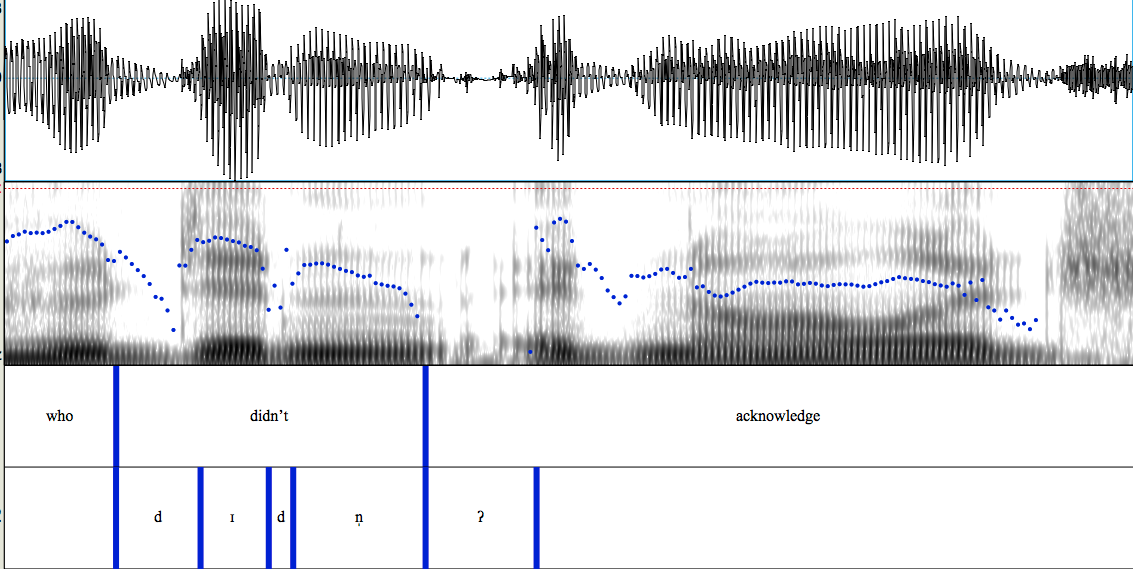 As indicated in the image above, an IPA transcription of that rendition of didn't would be something like

… or maybe [dɪɾn̩ʔ], though in this case the medial /d/ is arguably a weak voiced stop rather than a tap.

This is  the commonest pronunciation of the word "didn't" in even rather formal American English — the second-syllable reduced vowel and the final /t/ are hardly ever seen.

But that division into five phonetic segments obscures important aspects of what's going on, as we can see in a schematic articulatory score:

In the second syllable, the tip of the tongue closes off the oral tract for the [d], and this closure remains in place through the following nasal murmur and glottal stop; the velum opens to create the release of the [d] into the syllabic nasal [n̩]. and then remains open through (much of the) glottal stop; the glottis constricts to close off the nasal murmur — and then remains constricted as the velum closes again in preparation for the start of the initial vowel of acknowledge.

It's that articulatory spreading that makes the syllabic nasal a more natural outcome than the vowel+nasal combination. And it's the tendency to weaken non-pre-stress /t/ and /d/ to the point of losing the oral closure that makes it natural to turn the final /t/ into nothing more than a weak glottal stricture, and to weaken the medial /d/ to the point of extinction.

The OED is not the only dictionary to get the pronunciation of this word wrong.

If we look up didn't in the online version of cmudict, an open source pronouncing dictionary widely used in the speech technology field, we get

All of these are wrong in one way or another — either they postulate a second-syllable schwa segment, or they have a final [t], or both.

And the Wiktionary gives these pronunciations:

What's the point of this little example?

Well, the first thing is not news: dictionary pronunciations don't give a very good account of how people actually talk.

And the second, related point is not news either: IPA segment sequences — or other ways of segmenting and alphabetizing pronunciation — are not a scientifically very satisfactory representation of speech.

There are at least three reasons for this failure:

There's more to say about this, but that's enough for now.