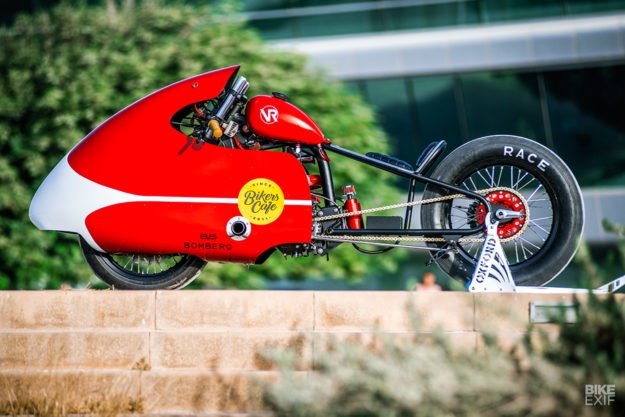 The Persian Gulf custom scene is small, but outposts like Bikers Cafe are working hard to change that. Every year, the Dubai joint gives three brand new motorcycles to local customizers for their annual build-off.

This year, Bikers Cafe picked a donor that most folks would turn their noses up at: the Indian-made Hero Xtreme 150, known in the United Arab Emirates as the Thriller. (Yes, those Emiratis have a sense of humor.) 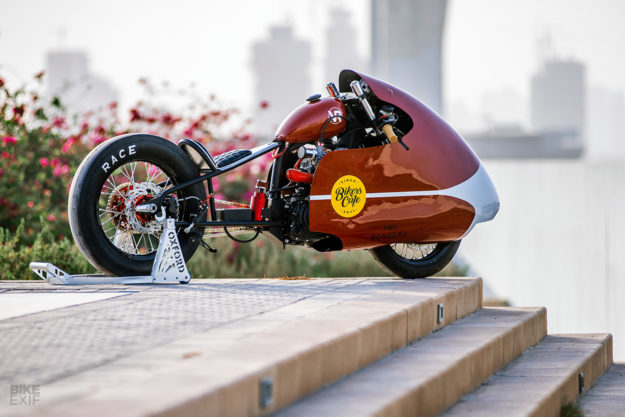 Here’s the winning entry, courtesy of Marc and Alan at VR Customs. Starting with what’s essentially a pizza delivery bike, they decided that ‘hard tail retro drag bike’ was the way to go. And they were right. Even though this Xtreme 150 won’t quite do an 11-second quarter mile, it’s by far the coolest delivery bike we’ve ever laid eyes on.

“We are not a shop,” says Marc, “just two guys with basement space that enjoy building bikes. But we were lucky enough as a private team to be given a bike to build.” 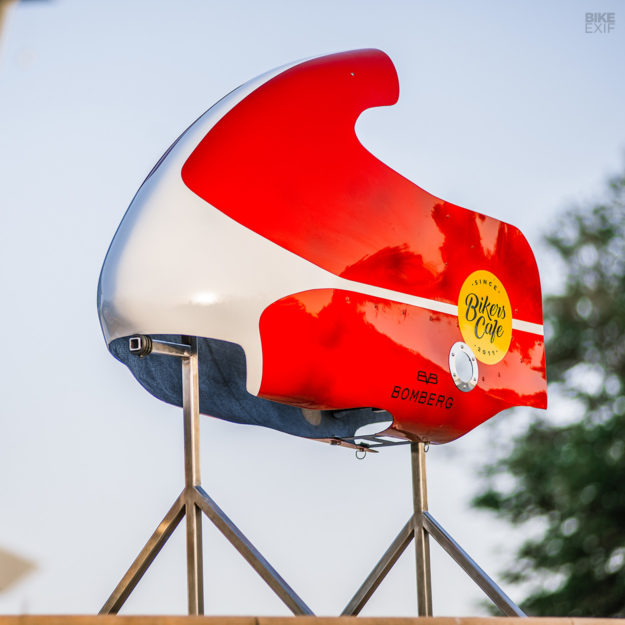 “The rules of the competition said that the engine must remain standard, but that was about it. It gave us the opportunity to go a bit crazy and build something unique. As our bad ideas grew it became a turbo, and we made some other changes as well.”

The donor Hero Xtreme was fresh off the showroom floor, but there’s not much left of it now. Most of the frame’s new, for starters. “The quality of steel used on the original was not great,” explains Marc, “so we gusseted the frame for strength.” 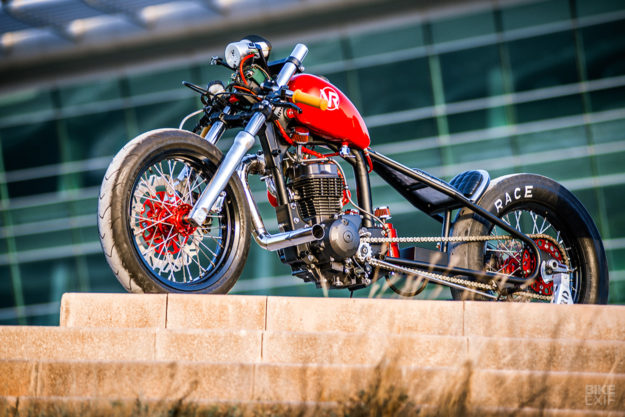 Then there’s that hardtail rear end. The guys had the pipes bent at a friend’s workshop, then assembled and welded them back at their own space. There’s also a lot of finessing that you can’t see—like a host of new brackets, and a redesigned lower engine mount.

As per the rules, Marc and Alan left the motor’s internals alone—but plugged in a few go-faster goodies. These include a PE30 Keihin carb, and a turbocharger designed for smaller bikes. Peripherals like a silicon intake pipe, and a new oil tank and pump, were added too. 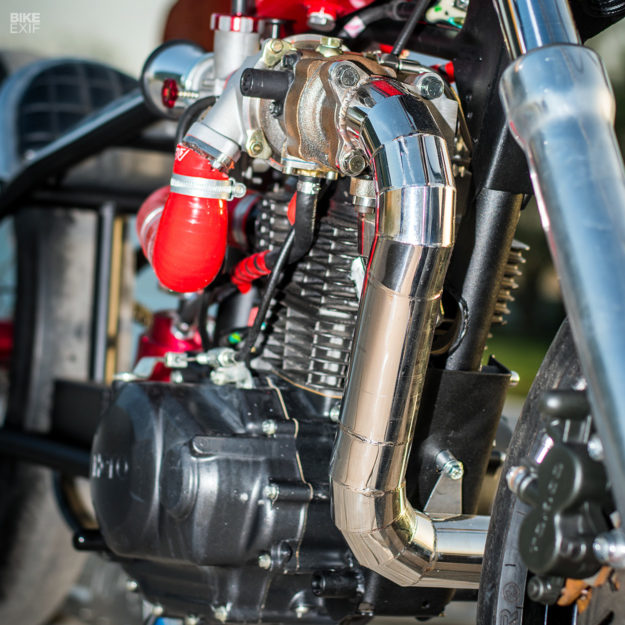 “Being only 150cc with the turbo on it’s not exactly scary,” says Marc. “The jetting was actually quite easy to get on our second attempt and she runs well up to the limiter. Ideally we would put a CR150 cam in and trick up the engine for more horsepower, but we were not allowed to.” 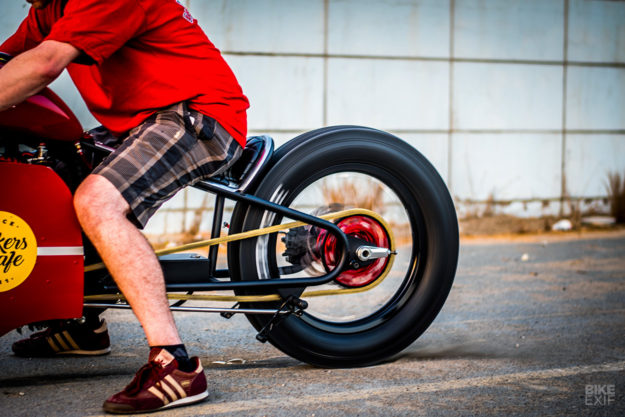 The Hero’s front caliper is now on the back wheel, with CRF wavy brake discs at both ends. Several brake adaptors and wheel spacers had to be machined up to get everything to play nice. The tires are a Metzeler Racetec in front, and an M&H vintage drag slick out back.

“We had most of the parts laying around from other builds,” says Marc. “We really only purchased the fairing, turbo kit and rear tire.” 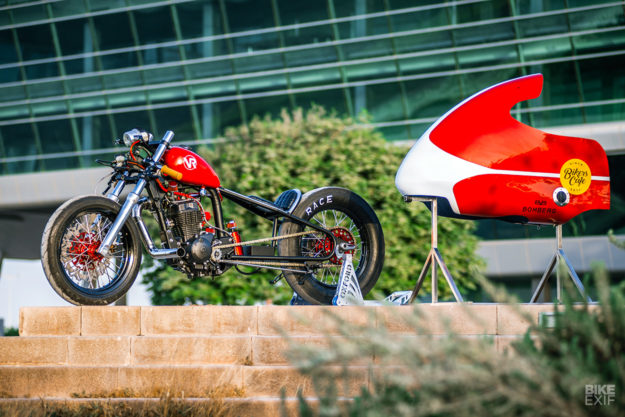 The fairing is a modern replica of a 1950s MV Agusta design. It needed a little trimming to help it fit the bike, and the lads had to figure out a way to mount it. “We used 2mm stainless plate inside the fairing, and then 10mm stainless tubing from the fairing onto the bike,” explains Marc.

“We then welded bushes onto the bike to slot the tubes into, with R-clips to secure in it place. It takes about one minute to remove the full fairing from the bike.” There’s also a hole on the left where a new, custom-made exhaust system kicks out. Neat! 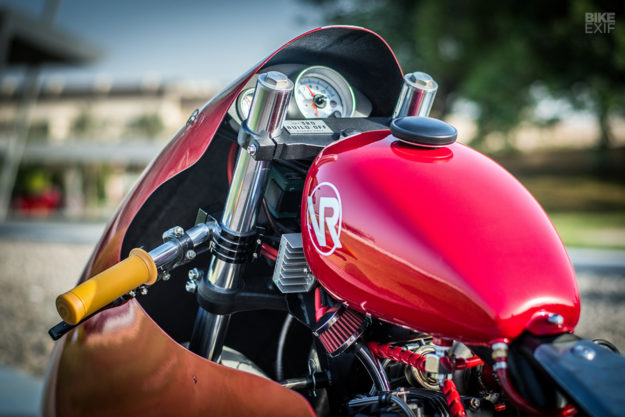 The only other bodywork on the Hero is a two-gallon peanut tank. Alan originally sourced it for another project, but it wasn’t quite right—so it ended up lying around until the guys decided to repurpose it here. It didn’t fit over the frame rails though, so it had to be cut-and-shut with a wider tunnel.

Just behind is a seat pan that Alan shaped by hand, capped off with a seat pad borrowed from a Honda CB750 café racer. The rider’s ergonomics are pure drag, thanks to a set of aftermarket Triumph Bonneville rear sets and billet clip-ons. 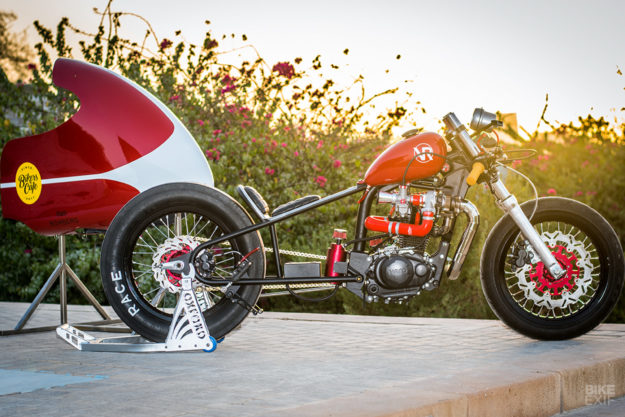 Tacho and boost gauges are mounted in a custom-built dash behind the fairing, with a pair of Biltwell Inc. grips rounding out the cockpit. 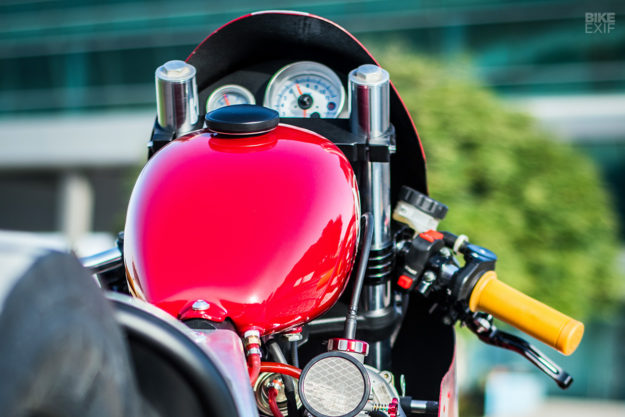 Is all of this overkill for such a small bike? Probably—but VR Customs’ Hero looks damn cool, and bagged them that trophy. Plus the guys intend to have a little more fun with it, as soon as it’s fulfilled its promotional obligations.

“All the bikes we build, we build for racing and track time,” says Marc. “This is the essence behind all our bikes.” 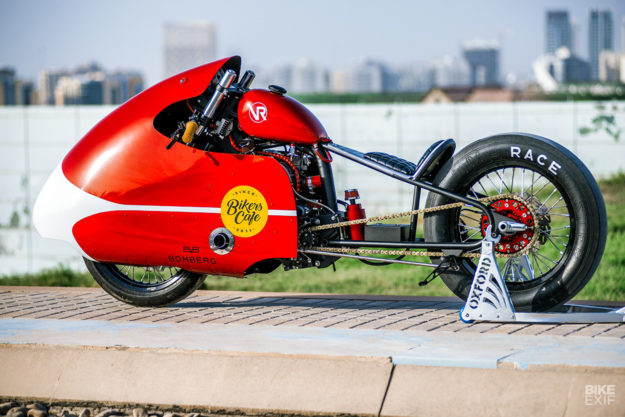 “This bike has actually spent more time doing burnouts than KMs ridden so far. We finished the bike and had one day to get a video shoot and burnout done, before it went on show for three months.”

“Once we have it back in January, it will be straight off to the drag strip to see what it can do.”