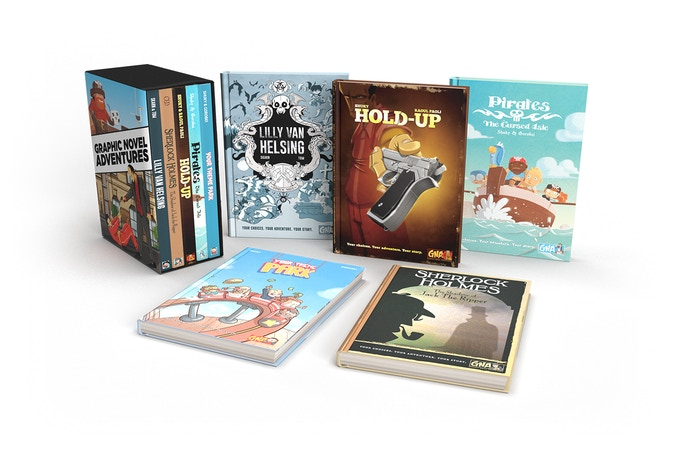 Van Ryder Games become one of the better developers of narrative-driven board games on Kickstarter. Games like Detective: City of Angels put them on the map, but it was their graphic novel that really took them over the top. Since Season One was released, the team has expanded the line with a second season and two, more involved offshoots in The Crusoe Crew and Sherlock Holmes: Baker Street Irregulars. And now, Van Ryder is back with Season Three. Unsurprisingly, it funded in two hours.

Did you all hear? We launched a thing today…https://t.co/4qx4kmA9gQ

Essentially, the Graphic Novel Adventures series is a modern-day take on classic Choose Your Adventure books. Each book is full of puzzles, riddles, and mysteries to solve. The best part is that, because you’re playing out of a graphic novel, there’s zero setup. As someone who mostly plays Gloomhaven these days, that’s an exciting prospect for a board game.

Season Three will, like the previous seasons, include five new books to play through. The first one puts you in charge of your very own theme park. Season One included a book called My Town that I quite enjoyed and this one reminds me a bit of that. Up next is Lilly Van Helsing, which sees you playing as the younger monster hunger trying to keep people safe from all those beasties. There’s also Hold Up, an adventure “for mature audiences only”. The set rounds out with a pirate adventure and yet another Sherlock Holmes mystery. All in all, the season looks fun and diverse. There’s something here for everybody.

Graphic Novel Adventures: Season Three from Van Ryder Games is on Kickstarter for 17 more days. the set of five books runs you $80, but if only a few titles interest you, you can pick them up individually for cheaper.