I'm way behind typing these up. About two months!

What should have been a quick tube ride up to South Kenton, ended up taking nearly 2 hours. You guess it, Sunday Rail Engineering Works. On top of that, we got a replacement bus, with a driver that had no idea where to go. Initially he went the wrong direction along the line. As it was a bit unclear whether it would actually stop at South Kenton, we got off one stop earlier at North Wembley, and walked to the start instead.

Once we started with the walk, we quickly realized that it was unlikely that we were going to walk two stages (10 and 11). The first 10 minutes made it very clear it was going to be warm, and very sweaty. 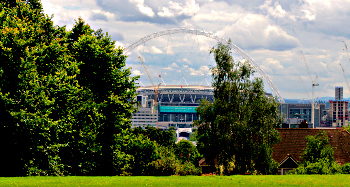 We quickly came through Preston Park, and upon Preston "High" Road, which we crossed to walk through a few residential streets to start up our climb up the hill through the Barn Hill Open Space. We had a quick water break at the stop—it was really warm and humid—for some relaxing. The Ring then goes around the little lake on the top of the hill, where you can find a trigpoint and a lovely view of Wembley Stadium. 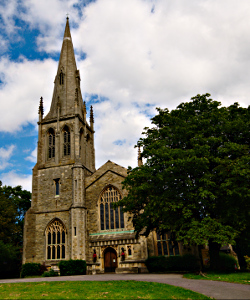 After crossing a road, we had another small climb in Fryent Country Park. It was a bit tricky to follow the route there with vague signing, and the presence of lots of little rows of trees, making navigating quite tricky. As this section of the Capital Ring was mapped well on OpenStreetMap, we find our way out, and assisted a local to find her way out of the maze as well.

We continued among more residential streets and ended up circling St. Andrew's Kingsbury church. After having a look at its cemetery we walked around the Welsh Harp Sailing Association. The name comes from nearby Welsh Harp, which is a large water reservoir to supply London homes with drinking water. A large part of the rest of Section 10 goes past this reservoir. We stopped again for a little water break.

After crossing the narrow bridge over the Silk Stream we shortly came upon West Hendon Broadway. Section 10 goes all the way to Hendon Park, but we chickened out early here. I ended up extensively mapping many of the shops along the Broadway. From here on, it was a straight bus down to Kilburn.

For the full photo series, see my Flickr set.