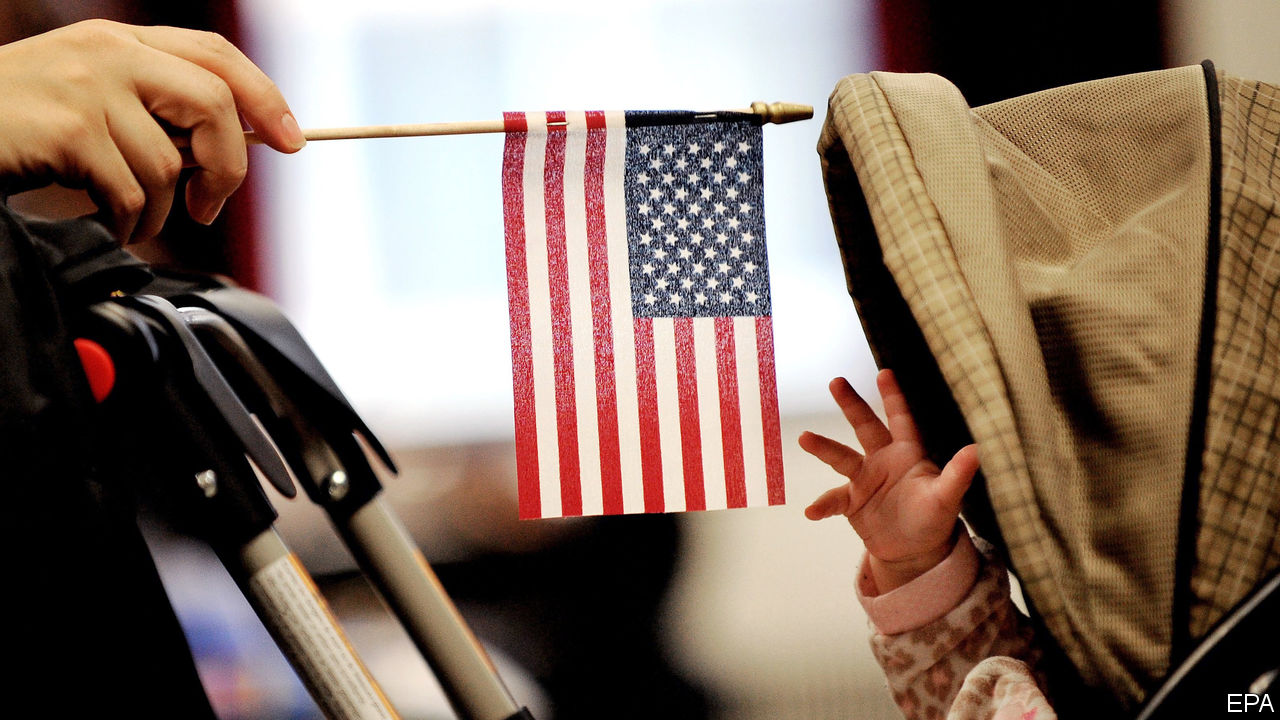 IMMIGRATION is an animating topic for President Donald Trump, and a vocabulary-expanding one for most Americans. Phrases like chain migration, anchor baby and migrant caravan have entered popular parlance under his watch. This week added “birthright citizenship”. Mr Trump told Axios, an American news outfit, that he is looking to end the right—now 150 years old—by executive order. His proposal would deny citizenship to the American-born children of unauthorised immigrants and possibly to foreigners in the country on non-permanent visas. The suggestion set cable news and social media aflame, and drew instant backlash from legal experts. That he would attempt such a thing should come as little surprise. Mr Trump trotted out the idea while campaigning in 2015. More recently, Michael Anton, a Trump acolyte and former White House official, argued in its favour in the Washington Post. Others are taking up the charge. Lindsey Graham, a Republican senator, says that he will write legislation to “deal” with birthright citizenship, calling it a “magnet for illegal immigration”. What is the fuss about?

The concept of birthright citizenship is straightforward: those born in America are citizens, even if their parents are not. The principle, known as jus soli, or right of the soil, comes from English common law. It was established in England in the early 17th century and then later exported to the colonies. It no longer holds in the United Kingdom, where at least one parent must be a citizen for a child to enjoy the right. But it persists in some Commonwealth countries—including in Canada, Jamaica and Pakistan—as well as in nearly every country in Latin America. (This is news to Mr Trump, who said, wrongly, that America is the only country to allow such a scheme.) In America, its history is tied up with race and slavery. The constitution outlined no criteria for citizenship, so an amendment enshrined the principle in 1868, cementing the legal status of former slaves, who had been denied citizenship until then. Lawmakers understood its broader sweep at the time. Would it “have the effect of naturalising the children of Chinese and Gypsies born in this country?” asked one senator in 1866. “Undoubtedly,” answered another.

The 14th Amendment made a few exceptions. Excluded from citizenship were the American-born children of foreign diplomats, members of an occupying army, or Indians under tribal government, since these groups were “not subject to the jurisdiction” of the United States. A few legal scholars have fixated on this clause; they see the children of unauthorised immigrants as another exception. They reason that their parents have no demonstrated political allegiance to America, nor has their presence in the country been sanctioned by other citizens. The Supreme Court upheld the principle of birthright citizenship in 1898. But it did not tackle the status of the children of unauthorised immigrants: the Chinese parents of the defendant in that case, a cook named Wong Kim Ark, were in America legally. The anti-birthright crowd spots an opening.

It looks likely to close. Limiting birthright citizenship would undermine over a century’s worth of legal consensus. Even James Ho, acknowledged to be among the most conservative federal judges that Mr Trump has appointed, has disagreed with his premise. And elsewhere the court has ruled that unauthorised immigrants fall under the jurisdiction of the United States, since they must obey the country’s laws. National allegiance is not what matters, in legal terms, when determining jurisdiction. Whether Mr Trump could enact his proposal by executive order is another question. Again, the answer is probably no, as the change would require a constitutional amendment. With the midterm elections next week, many see a political stunt by the president—an effort to rile up his base and stoke the anti-immigrant flame. Cynicism over civics, then.