Last week I wrote about a secret JNJ acquisition and wondered if the VA confirmed that Google/Nest health project I wrote about last year. Next week I am open to ideas — what should E&O dig into? Here’s what’s happening this week:

Did this get forwarded to you? Remind your friend they shouldn’t be doing that every week, and then clear your conscience by signing up as a paying subscriber today! Get full access to E&O by clicking here.

One of the questions I have about the fallout of Proteus Digital Health’s Chapter 11 proceedings: Will Otsuka actually continue on with its plans for digital medicines? Will it keep making Abilify MyCite and expand into other, related therapeutic areas?

Prior to the Chapter 11 filing, Otsuka had already acquired a patent and some of the other assets it needs to do that, but it still needed Proteus to manufacture the ingestible sensor-embedded pharmaceuticals as well as the patches. Up until this point, it seemed, Otsuka continuing on with digital medicines still depended on Proteus — or Proteus under new ownership — continuing on.

This week Otsuka and Proteus came to yet another agreement, and it indicates Otsuka is at least somewhat willing to entertain the possibility of doing it all themselves.

The Japanese pharmaceutical company’s US-based subsidiary has agreed to make a stalking horse bid for some of Proteus’ assets. The bid amounts to $15 million in cash, and it also calls for a break-up fee that amounts to 3 percent of the final purchase price plus as much as $750,000 in reimbursement for documented fees related to the sale.

If you happen to put stock in the valuations that investors assign to VC-backed startups, at one-time Proteus had a $1.5 billion valuation. Now its remaining assets are set to be sold for $15 million. That’s exactly 1 percent.

Of course, Proteus has until August 6th to find a better offer. About a week after that Proteus will be sold to Otsuka or someone else. Since June 10, at least 20 other interested parties have expressed an interest in potentially making a bid, according to court documents filed on June 23rd.

What is clear from the stalking horse bid agreement is that Otsuka is mostly interested in acquiring assets that would enable it to manufacture digital medicines. As I noted above, they already have acquired everything else they need from Proteus.

Here’s the list of assets Otsuka specifically mentioned in the agreement: 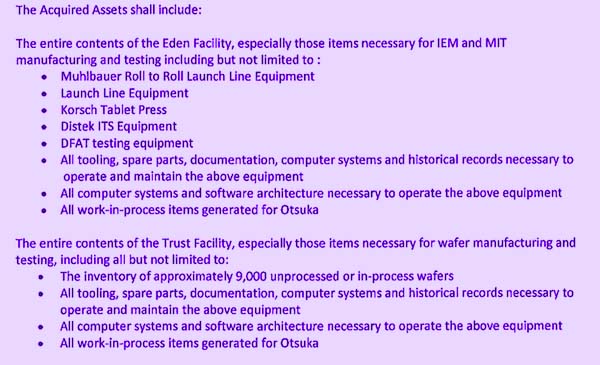 From the looks of the timelines outlined in the court documents, it’s unlikely there will be further developments on this story before that August deadline noted above.

The Institute For Clinical and Economic Review (ICER) is about to begin a comprehensive study of digital therapeutics for opioid use disorder (OUD). ICER hasn’t waded into digital health waters too often, but its study of the diabetes prevention program (DPP) back in mid-2016 — arguably — helped launch the category.

Among the conclusions in its final report on DPP, ICER:
* encouraged payers to cover DPP programs with no co-pays;
* suggested providers screen patients for prediabetes and, if identified, immediately refer patients to a DPP;
* and said that DPP providers and payers should create pay-for-performance pricing.

Omada Health was particularly excited about this report, as you can read in their 2016 recap here.

ICER reports show up in lobbying efforts for Medicare reimbursement, and I imagine they are a part of most pitches to private payers, assuming the results are favorable.

So, yea, this is a big deal for digital therapeutics.

And the forthcoming ICER report on digital therapeutics for OUD comes as Pear Therapeutics continues to make its case to payers. Swedish biopharma Orexo is working to bring a competitive offering via its partnership with GAIA, but oddly Orexo’s OUD DTx is not one of the three products that ICER will study.

ICER explained that it winnowed its list of potential products down to just those that worked as adjuncts to medication-assisted treatment (MAT):

“Stakeholders suggested that telehealth approaches to MAT for OUD were qualitatively different from digital adjuncts to MAT, so we removed them from the final scope. Some stakeholders suggested only including FDA-approved digital therapeutics, but others encouraged us to consider other platforms with evidence supporting their effectiveness and the potential for FDA approval in the future. We elected to go with the larger group of digital therapies in order to give a broader perspective on what is available and to help inform future research.”

The majority of public comments on ICER’s planned study came from affiliates of Pear. Had Pear gotten its way in successfully arguing that ICER only study FDA-approved DTx, I believe ICER would have only studied Pear’s reSET-O.

You can read the full scoping explanation from ICER here, but here’s a preview of what the study aims to figure out:

“This project will evaluate the health and economic outcomes of digital therapeutics in addition to MAT in OUD. The ICER value framework includes both quantitative and qualitative comparisons across treatments to ensure that the full range of benefits and harms – including those not typically captured in the clinical evidence such as innovation, public health effects, reduction in disparities, and unmet medical needs — are considered in the judgments about the clinical and economic value of the interventions.”

The links below aim to make it easier for paying subscribers to find the long-form research reports on the E&O site: