Scientists have achieved a billion-fold increase in the electrical conductivity of melanin, that could unleash its potential in safe, sustainable bioelectronics.
The dark brown melanin pigment, eumelanin, colors hair and eyes, and protects our skin from sun damage. It has also long been known to conduct electricity, but too little for any useful application - until now.

In a landmark study published in Frontiers in Chemistry, Italian researchers subtly modified the structure of eumelanin by heating it in a vacuum.

"Our process produced a billion-fold increase in the electrical conductivity of eumelanin," say study senior authors Dr. Alessandro Pezzella of University of Naples Federico II and Dr. Paolo Tassini of Italian National Agency for New Technologies, Energy and Sustainable Economic Development. "This makes possible the long-anticipated design of melanin-based electronics, which can be used for implanted devices due to the pigment's biocompatibility."

Eumelanin is a biocompatible conductor
Pictorial model of the polyindole packing evolution during the high vacuum annealing. Water molecules and carboxylic groups are evidenced, to show their reduction in the material as the process temperature increases. 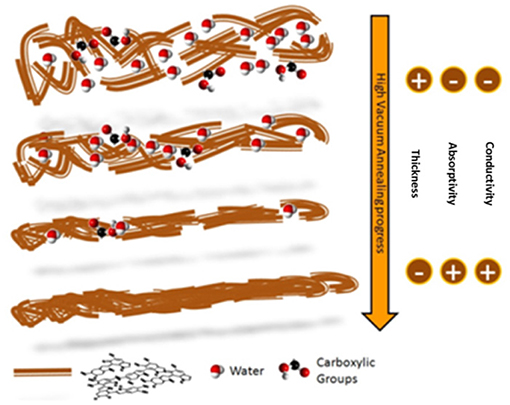 A young Pezzella had not even begun school when scientists first discovered that a type of melanin can conduct electricity. Excitement quickly rose around the discovery because eumelanin - the dark brown pigment found in hair, skin and eyes - is fully biocompatible.

"Melanins occur naturally in virtually all forms of life. They are non-toxic and do not elicit an immune reaction," explains Pezzella. "Out in the environment, they are also completely biodegradable."

Decades later, and despite extensive research on the structure of melanin, nobody has managed to harness its potential in implantable electronics.

"To date, conductivity of synthetic as well as natural eumelanin has been far too low for valuable applications," he adds.

Some researchers tried to increase the conductivity of eumelanin by combining it with metals, or super-heating it into a graphene-like material - but what they were left with was not truly the biocompatible conducting material promised.

Determined to find the real deal, the Neapolitan group considered the structure of eumelanin.

"All of the chemical and physical analyses of eumelanin paint the same picture - of electron-sharing molecular sheets, stacked messily together. The answer seemed obvious: neaten the stacks and align the sheets, so they can all share electrons - then the electricity will flow."

This process, called annealing, is used already to increase electrical conductivity and other properties in materials such as metals.

For the first time, the researchers put films of synthetic eumelanin through an annealing process under high vacuum to neaten them up - a little like hair straightening, but with only the pigment.

"We heated these eumelanin films - no thicker than a bacterium - under vacuum conditions, from 30 min up to 6 hours," describes Tassini. "We call the resulting material High Vacuum Annealed Eumelanin, HVAE."

The annealing worked wonders for eumelanin: the films slimmed down by more than half, and picked up quite a tan.

"The HVAE films were now dark brown and about as thick as a virus," Tassini reports.

Crucially, the films had not simply been burnt to a crisp.

"All our various analyses agree that these changes reflect reorganization of eumelanin molecules from a random orientation to a uniform, electron-sharing stack. The annealing temperatures were too low to break up the eumelanin, and we detected no combustion to elemental carbon."

A billion-fold increase in conductivity

Having achieved the intended structural changes to eumelanin, the researchers proved their hypothesis in spectacular fashion.

"The conductivity of the films increased billion-fold to an unprecedented value of over 300 S/cm, after annealing at 600°C for 2 hours," Pezzella confirms.

Although well short of most metal conductors - copper has a conductivity of around 6 x 107 S/cm - this finding launches eumelanin well into a useful range for bioelectronics.

What's more, the conductivity of HVAE was tunable according to the annealing conditions.

"The conductivity of the films increased with increasing temperature, from 1000-fold at 200°C. This opens the possibility of tailoring eumelanin for a wide range of applications in organic electronics and bioelectronics. It also strongly supports the conclusion from structural analysis that annealing reorganized the films, rather than burning them."

There is one potential dampener: immersion of the films in water results in a marked decrease in conductivity.

"This contrasts with untreated eumelanin which, albeit in a much lower range, becomes more conductive with hydration (humidity) because it conducts electricity via ions as well as electrons. Further research is needed to fully understand the ionic vs. electronic contributions in eumelanin conductivity, which could be key to how eumelanin is used practically in implantable electronics." concludes Pezzella.


Contacts and sources:
Matt Prior
Frontiers

This research is part of a special article collection on organic electronics: https://www.frontiersin.org/research-topics/8227/organic-electronics-from-synthesis-to-applications

LaptrinhX
—
Will Cyborgs Be Made from Melanin? Pigment Breakthrough Enables Biocompatible Electronics
Share this