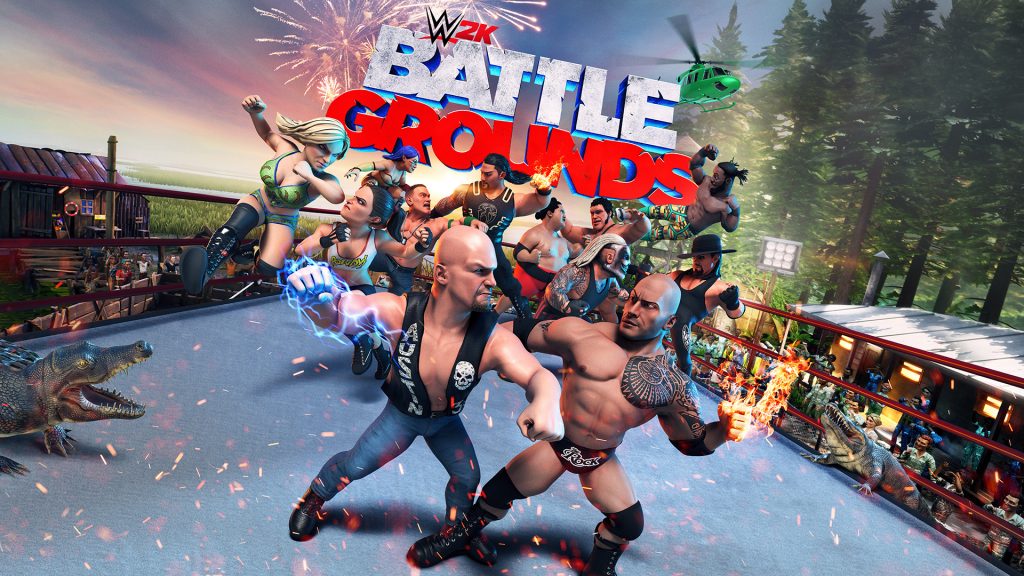 It is no secret that the WWE 2K franchise is in a bit of a rut. I’ve played every WWE game since 2K took over, and for the most part, I’ve enjoyed my time. Obviously, they aren’t perfect, but I have always dug its character creation suite and presentation. That is, until WWE 2K20 — that game was pretty awful. That unfortunate event has led 2K and Visual Concepts to postpone its annual franchise to next year, but that doesn’t mean we’ve received a break WWE video games entirely.

“[WWE 2K Battlegrounds] is maybe the most lifeless and uninspired wrestling game I have ever played.”

Developed by Saber Interactive, WWE 2K Battlegrounds is the latest WWE branded wrestling game and is, in some ways, the wrestling game everyone has been asking for (sans a GM mode). Similar to 2011’s WWE All-Stars, it takes a more “over-the-top” approach with arcade-style gameplay, fantastical venues, and cartoonish character models. It’s actually somewhat of a breath of fresh air from the buggy mess that WWE 2K20 was. Despite that, it is maybe the most lifeless and uninspired wrestling game I have ever played.

That isn’t to say Saber Interactive and 2K haven’t created a solid foundation with WWE 2K Battlegrounds. That sentiment is mostly due to its gameplay. For the first time in years, I didn’t have to learn to wrestle with an intense control scheme. I was able to simply pick up the game and play mostly without hesitation.

The basics of WWE 2K Battlegrounds’ gameplay is the most approachable a wrestling game has been in a long time. Each wrestler has its own set of moves and finishers, as well as their own style and melee combinations. It sounds like a lot, but the gameplay loop of a match typically boils down to using your grapples when you have the stamina, then using melee combinations when your stamina starts to run low. Once you’ve built up your meter for your finisher, which is indicated by a blue circle under your wrestler, you just press in both triggers. Once a wrestler’s health is low, go for the pin. 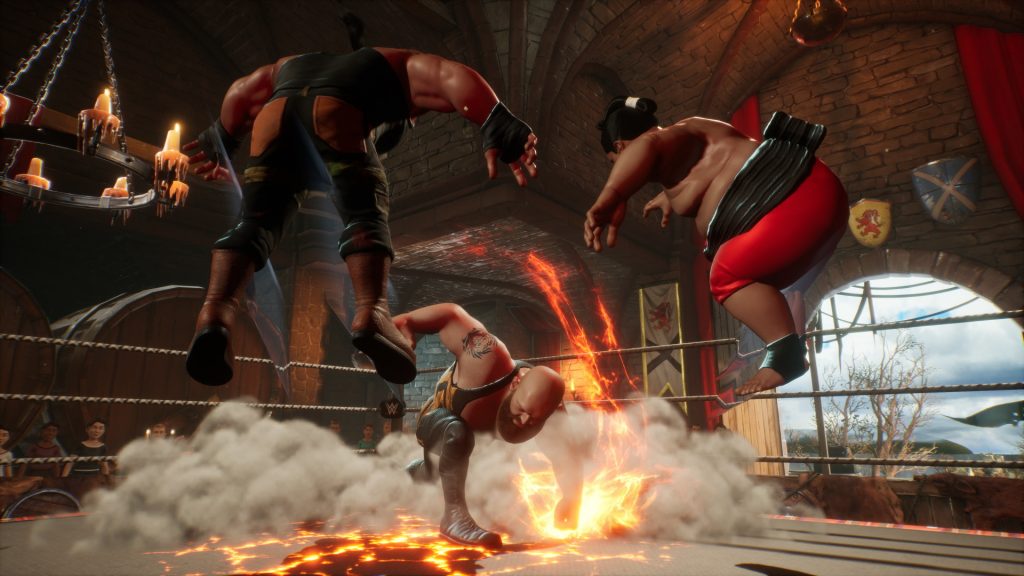 Your wrestler is also equipped with three special abilities you can choose before a match starts. These abilities are split into each tier and increase in power as you move up in tiers. However, it takes longer to build up enough meter to use the higher tiered power-ups. For example, tier 1 power-ups will give you buffs like increased damage, while a tier 3 power-up will allow your moves to be unblockable for a set period of time. These abilities add a bit more substance to a match, but they never felt too useful unless I was fighting higher-ranked wrestlers like Brock Lesnar, The Undertaker, and The Rock.

“For the first time in years, I didn’t have to learn to wrestle with an intense control scheme. I was able to simply pick up the game and play mostly without hesitation.”

The approachable gameplay and added abilities make for some engaging matches for a bit. The first few matches I had, I was actually quite impressed. But as I played a few more hours, it felt like every match was the same with minor difficulty spikes here and there depending on who I decided to wrestle.

WWE 2K Battlegrounds does attempt to mix things up with its different arenas. From the traditional WWE locales like Raw and WrestleMania-themed rings, to more wild areas like a swamp and a garage in Detroit, there is some variety. Also, each arena has its own gimmick attack. For example, the swamp-themed arena lets you throw your opponent into a crocodile (which is rad) and the boot camp arena had a helicopter you can jump off of (which isn’t as rad as you’d think). The different arenas do help with giving a bit of variety to each match, but after the third match in the same arena, it becomes the same monotonous gameplay. 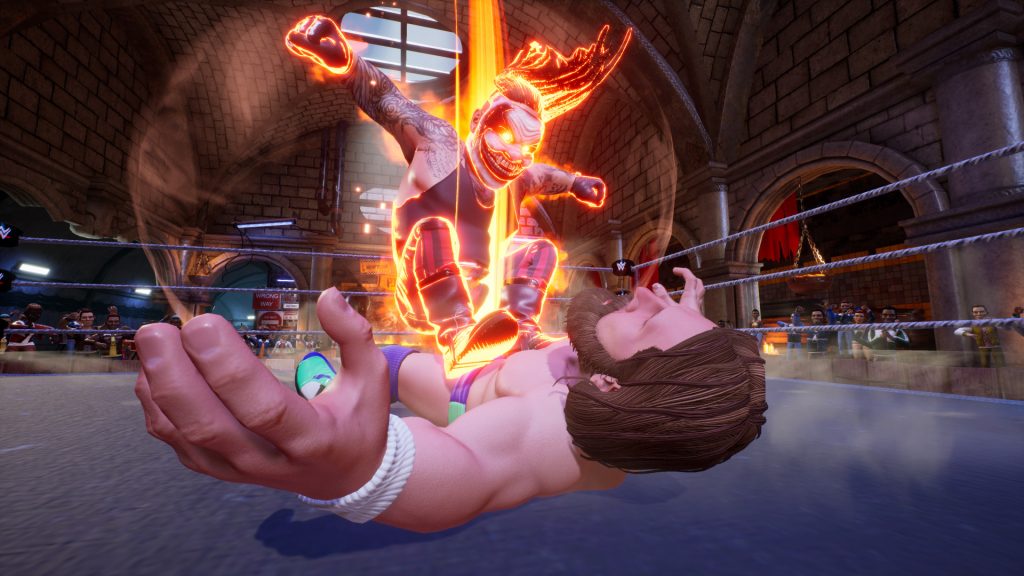 The WWE 2K games have always some problems, but I consistently loved the creative suite. I always felt like I could imagine something and create it. Unfortunately, that isn’t the case with WWE 2K Battlegrounds. While the general art direction is more cartoonish making each character not look as generic, I never felt like I could create the wrestler I wanted. A lot of that comes down to the outfits you can give your wrestler.

When creating your own wrestler, you choose a fighting style that determines their moveset and skill tree. Since WWE 2K Battlegrounds is smaller in scale than previous WWE games, there are fewer options for your created character. In some ways, this is a bit of a welcome addition. The skill tree for your created wrestler in the WWE 2K games can be overwhelming. So, I do really like that the skill tree in this game isn’t nearly as large. However, I would have liked more moveset customization. You can really only choose from a handful of finishers and signature moves, most of which are pre-existing moves from other wrestlers. Your basic moves seem to be determined by your fighting style, which is a bit of a letdown.

Even if you end up creating a wrestler you enjoy playing, you still need to earn credits from playing the game to get all the moves and attire you want to equip on your wrestler. This brings us to the unfortunate reality of microtransactions in WWE 2K Battlegrounds. Yes, you can totally purchase everything by just playing the game, but the amount of credits you earn per match is really minimal. And since wrestler creation and gameplay are just underwhelming, it is hard to get motivated to really flesh out your own wrestler. 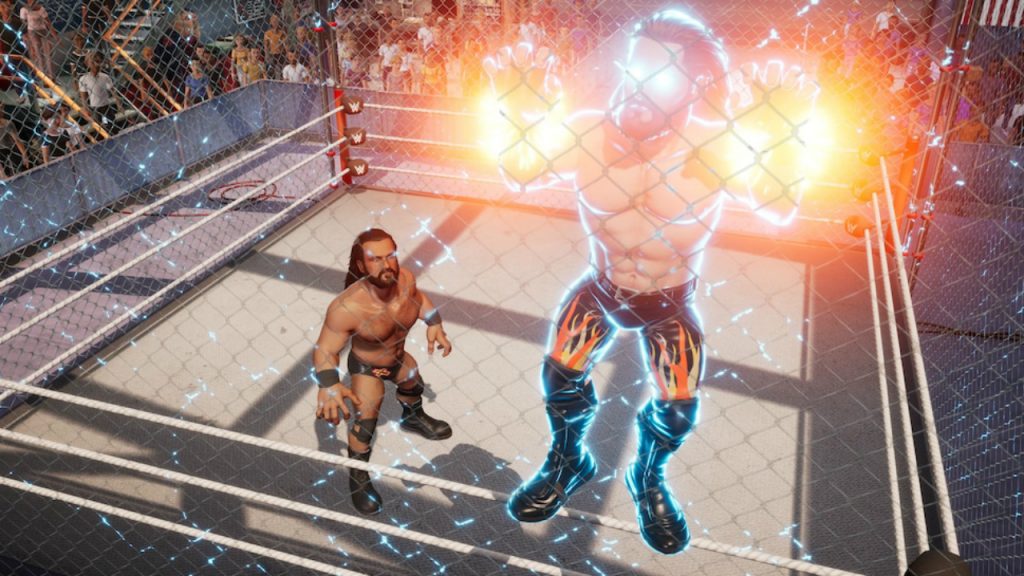 WWE wrestling isn’t all about the fighting. A large part of that “product” is how it is presented. The entrances, the storylines, and the commentary all play a big part in any given match, which makes it a huge bummer that WWE 2K Battlegrounds lacks in just about every area in its presentation. The entrances are essentially the wrestler’s theme playing in the background as they get dropped in a pod and stand there for a little bit. The campaign mode does have a story, but it is all presented in a comic book-style; this isn’t necessarily bad, but the story isn’t all that great. And as much as I love Mauro Ranallo, the commentary felt more like a bad version of NBA Jam than good wrestling commentary. The presentation is just really dull, especially for how over-the-top the action is.

“After a couple of hours, all of WWE 2K Battlegrounds’ silly over-the-top gimmicks lose their luster.”

These flaws in its presentation extend to its art style. Overall, the art direction is great. I do like the exaggerated animations of the environments and wrestlers. But like every WWE 2K game, some wrestlers look astoundingly better than others. WWE Superstars like Asuka, Stone Cold, Roman Reigns, and The Undertaker all look like a caricature of that wrestler (and I mean that in a good way). However, someone like The Miz just looks like the default white dude you see when you create a wrestler. Or Alexa Bliss, who I legitimately thought was Toni Storm from the profile picture that is used. That is, until I asked myself, “Why doesn’t Toni Storm have the makeup under her eye? Also, I didn’t know Toni Storm was in this game?”

I am so mixed on WWE 2K Battlegrounds. In some ways, I really dig that 2K decided to create an arcade-style wrestling game. I do believe the basics of this game make a solid foundation for another entry. The “pick-up and play” direction is great if you want to play with a few friends. Still, a lot of its flaws make it hard to recommend to those who usually play these games alone. After a couple of hours, all of WWE 2K Battlegrounds’ silly over-the-top gimmicks lose their luster.